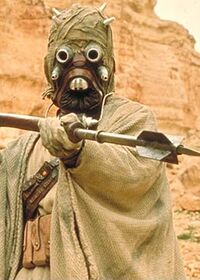 A BBC reporter models new, fashionable garb for fighting and covering the wars in Iraq and Afghanistan.

“And, after all, what is a fashion? From the artistic point of view, it is usually a form of ugliness so intolerable that we have to alter it every six months”

Fashion is the continuing quest for the next great style. It is a puzzling force that can alter minds to find clothing, accessories, and perfumes that would seem completely ridiculous at any other time.

There are only four great modern styles. These are Couture, Glamour, Chic, Stylish and occasionally kittens, in that order. They supersede one another every "season" (a time period slightly longer than six months), at which time you need to replace your entire wardrobe, to remain fashionable.

Engineers are permitted to totally ignore fashion, as the world so needs their creative output. Attention to appearance (and to unpleasant odors) would simply be a distraction.

For those without comedic tastes, the so-called experts at Wikipedia think they have an article about Fashion.

Fashion comes from the word fascism. Fashion is similar and almost as popular but less glamorous. The concept of fascism was originated by famous Italian statesman Benito Mussolini. His notorious first fashion statement was that it would be cool to dress like the Nazis and perhaps take over all the factories. Mussolini did not extend this stance to growing an awkward toothbrush mustache.

Several years and one war later, Mussolini resigned from fashion. Europeans still remember his final statement, delivered from the catwalk:

Fashion has not escaped criticism through the years. It has been compared to the dumbing down of boxing to Tae-Bo, which is boxing without the violence or beer. Like fascism, fashion is based on brutal control and with both your life is taken over and you are forced into line with everyone else.

After the war, France retook control not only of France but of fashion. Much of our modern, outré fashion statements come from France, such as: 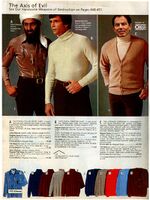 The Lords of the Turtlenecks ruled America during the au Go-Go period.

After France took back France, America took back France and assumed the lead in dictating world fashions. This was the au Go-Go period, which is French. Turtlenecks and leisure suits were in fashion. Thanks to advances in pharmacology, however, condoms were never worn outside the house.

Fashion later passed from America to Sesame Street, as gang leader Jim Henson, criticized by American television networks for the fact that all the said street's residents were not only naked but had someone's hand up their backside, sought to distract from this criticism using small articles of clothing and "educational messages."

To this day, pet owners will wash and dye their pet's hair and clothe them in everything from scarves to vests. Especially the poodles (referring here to the animals). The animals themselves consider fashion a necessary chore, on the order of rolling over on command, on the way to the next free meal. It is much less clear what the humans are thinking. 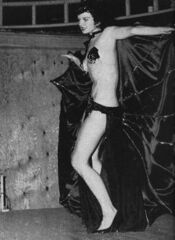 Thanks to conservative morality, we may never get to see our grandmothers attired in traditional dresses, like this one from Transylvania.

Making one's self sexy was always a cherished fashion ideal. Sexy cave-women were always more likely to get film roles, such as Raquel Welsh in One Million Years B.C.

In the 1960s, however, both human history and the circular march of fashion came to an abrupt halt (right around the time of the stripes craze), when militant, hairy women decreed that it was unfashionable to be sexy.

Almost overnight, unsexy shows such as Godzilla and unattractive characters such as Mr. Potato Head enjoyed massive sucess. The Evening News fired its entire anchor desk of naked lesbian cheerleader anchorwomen and replaced them with boring men, many of whom had mustaches.

The move drew large protests from both sexy people and razor blade manufacturers, who claimed mustaches were the province of communists. Unrest reached a tipping point when the network changed its program "Desperate Naked Lesbian Cheerleaders" to "Desperate Housewives" and replaced young women with old women pretending to be young.

Generations later, singer Justin Timberlake declared in song that he was going to "bring sexy back" and lead armed stylists in a rebellion against the gorillas. The gorillas struck back with an audio editor, so that the song resembled a duet of a singing computer and a white noise generator. Justin's voice had changed, but the world would never know it. As we all know, Justin then quit the music business and turned to writing haiku poetry.

The Fashionista was a fighting robot conceived by Stan Lee. The Fashionista fought in the Fashion wars alongside Scooby Doo's gang of crime solvers. During the fashion wars, the Fashionista was cloned millions of times. Fashionistas fight using a technique called the "Cat Walk". This technique features the wearing of bizarre hats and clothing materials containing psychedelic drugs, deadly sharp edges, lace traps, and blinding amounts of glitter in the form of sequins, inlaid beads or gems. Some fashionistas even use the technique of "Wing Whipping", which is exactly what it sounds like: whipping each other with strapped-on wings. If you come face to face with a Fashionista, whatever you do, do NOT let on that you know the Fashionista is a clone.

Women and gays are more interested in fashion than other people are. So are men from French Canada even if they are neither of the above. So, if you would like to know more, you should ask them. Although, if you are really interested in the subject, you probably are a woman or a homosexual and will have no trouble finding someone to ask.