For those without comedic tastes, the self-proclaimed experts at Wikipedia have an article about Fashion Police.

This historical uniform is on display at the IFPO headquarters in Milan.

The Fashion Police, (or Faschungpolizei in German), officially known as the International Fashion Police Organization, or IFPO, is an international corps of highly trained lawmen togged to the teeth in hip threads and endowed with a fab flair for snuffing the passé. All the boss hepcats who know where it's at don't jump bad with the Fashion Police cause they know they have powers beyond anyone's imagination. The Fashion Police was responsible in 2002 alone for pinching over a thousand candyass squares.

The IFPO's headquarters is a primo pad in Milan, where the fuzz put on the ritz in their outta sight juice joint and sloosh copacetic sounds with their keen shebas. The main man is a real gone cat called Ronald K. Noble. who'd just as soon dis your togs as shake your hand.

History of the Fashion Police[edit]

The Fashion Police was originally a French institution, and even as early as the late sixteenth century, it wasn’t uncommon to see les Gendarmes de la Mode tooling up and down the Champs Elysées in their hopped up hansoms. By the early seventeenth century the Scotland Yard’s Fashion Finks had a righteous lot of tricked out victorias for nabbing panty waists like it ain't no thang. With the formation of the United Nations in 1945, the various Fashion Police organizations around the world, including the American NSA's Special Task Force on Style, and the Russian Polisti Mody were incorporated into the International Fashion Police Organization. Today their descendent is known as UNFPO (the United Nations Fashion Police).

The IFPO sometimes enlists the aid of local special forces.

Many of the IFPO's methods are edged with controversy. The organization has a hip-to-the-jive field force of about a thousand big-six hepcats, who cooperate with local coppers and hard-boiled torpedoes to bust phiz-faced ragamuffin saps for wearing bogue threads.

When the FP gets wind of some flour loving face stretcher dolled up all baloney and lookin' like some kind of quiff, or some lollygagging killjoy in last week's trousers, they get a wiggle on right quick. First off the FP audit team does a little number on the perp, checkin' for connections with known dweebs deadbeats and ditzes, investigating purchase histories for fashion faux pas, and searching a database of previous offenders. When the dirt's been dug and the perp's in it, the FP turns up the heat. If the shit's deep, the Fashion Police will call in some big guns and coordinate with local fuzz to get justice done.

If they run into any trouble on the way, these badass hepcats won't hesitate to use some unconventional policing methods. Infamous among the bad fashion community are the cashmere maiden and the dreaded rayon rack.

The UNFPO approach to the suspected offender is a three-point interrogation: 1) Have you worn this previously in the past twelve months? 2) Why didn't you have professional help in choosing this apparel? and 3) Are you now, or have you ever been, subscribed to Vogue magazine?

She ain't pretty; he's my brother

The IFPO has been accused on numerous occasions of maintaining illicit connections with the gay mafia. In response to these allegations, an IFPO spokesman said "No comment, but off the record, those babies wear some ducky glad-rags."

Several members of the IFPO secretariat resigned in 2003 when it was discovered that they were taking hush-money from Chloe Sevigny and using it to fund Bravo cable television network's Queer Eye for the Straight Guy.

Unlike other international law enforcement agencies, the FP does not turn over apprehended fashion criminals to the local government, and instead run their own chastisement and corrections operation. A few examples follow: 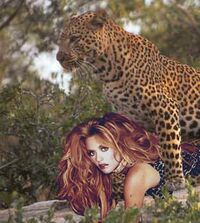 Rare footage of a fashion crime being punished.

Wearing White Before Easter and After Labor Day.

Polyester pants stretched so far and tight that they scream for mercy.

Bellbottoms. (This got out of hand during the Sixties.)

Just when you thought no one was safe - there comes but one loop-hole in the oppressions of the IFPO. Yes boys and girls - diplomatic immunity. But how does one gain this controversial status? Moneys? Free lifetime subscriptions to Vogue magazine?

Alas, if it were only that simple. You must do the impossible - become a drag queen. Or very flagrantly homosexual. 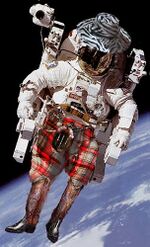 The best fashion minds in the US Government worked day and night to ensure that this suit appeal to all demographics. Scottish cowboy pimps around the world rejoiced

The NASA Committee on Fashion

The NASA Committee on Fashion ensures that Spacemen of the US of A get fitted in the niftiest duds in the sky. Their work is known throughout the seven skies as some of the baddest trouser-craft known to man, not to mention the high-technical effects that go into making threads that can withstand the noxious odors of outer-space. Unfortunately for fashion aficionados around the galaxy, funding to the NASA Committee on Fashion was cut around 1980, resulting in the plain-jane space pants we see today. 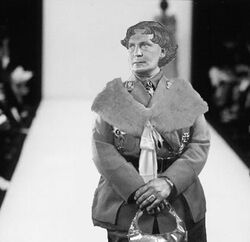 The Fashion Gestapo was the secret fashion police of Nazi Germany. They had a reputation for persecuting perfectly and well-dressed fashionistas, and would use ruthless techniques to extract confessions and denunciations from their prisoners. Hermann Goring was director of the Fashion Gestapo and abused his powers to enforce his own personal and tasteless fashion choices on the innocent populace.

Throughout history there have been several groups who, unsatisfied with legal means of fashion persectution, have taken the law into their own hands. The terrorist group What Not to Wear, or the WNW has claimed responsibility for over 300 fashion related deaths since its inception in 1954.