From Uncyclopedia, the content-free encyclopedia
(Redirected from Italian)
Jump to navigation Jump to search

Italy (pronounced Eat-a-lot) is a country that is slightly better than France, located in southern Europe. Italy is an archipelago of two islands but also includes a small peninsula that juts off the southern European coast. Originally known as the Roman Empire, Italy is home to some of the most amazing engineering marvels including the Colosseum, a tower that's falling over, and a city run entirely on religion. Despite high prices, Italy continues to serve as one of the top tourist destinations for fine dining, visiting museums, and getting robbed by gypsies. 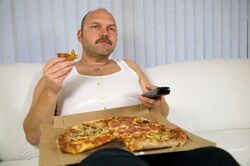 Early Italians were the inventors of food itself and thus food remains a very important aspect of Italian culture. Ancient Roman documents have suggested that while the rest of the world was eating rocks, twigs, and dirt, Italians were dining on mud with tomato sauce. However, we know that claims like these are nothing more than legends since tomatoes are not indigenous to Italy and were brought over from the New World. Thus, the first Italian food probably consisted of mud with basil, and possibly mozzarella.

A traditional Italian meal includes an appetiser, soup, salad, pasta, meat, seafood, second pasta, dessert, coffee, cheese, third pasta, and cannoli. Lunch is usually the biggest meal in Italy, although dinner, breakfast, and second lunch can also be very extravagant. Lunch is so important to Italians, in fact, that children are dismissed from school at noon so that they can enjoy some nice carbs with their families, after which they return to Home Ec. class. A true Italian meal is almost always served with wine as Italians consume more wine than any other group of people, even more than alcoholics.

Italian dishes vary in different regions, although some favourites, such as gelato, are eaten everywhere in the country. A good example of a classic dish is the "alla parmigiana," a method of cooking in which a meat or vegetable of the chef's choice is breaded, fried, and covered in sauce and cheese. Variations of this dish can range from the simple lattuga parmigiana (lettuce parmesan) to the delectable maialino da latte parmigiano (suckling pig parmesan). Other dishes include various pastas served either alla carbonara (with cheese and bacon), alla bolognese (in a meat sauce), or alla salsa di ogni cosa (a sauce of cheese, zucchini, fish, sausage, eggplant, tomatoes, sherry, black pepper, beefsteak, chicken, lobster, pumpkin, shrimp, tiramisu, milk, and pureed pizza dough). 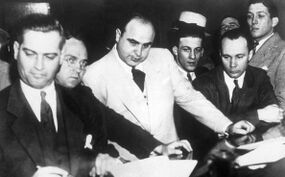 The Italian parliament, circa 2010.

Italy has a parliamentary government consisting of two houses, a cabinet, and a flowerpot. The Prime Minister, officially Capofamiglia, is Italy's head of government, followed by the Underboss, Consigliere, and Caporegime. The parliament itself is composed of the Chamber of Deputies and a senate, which help produce counterfeit liquor and eliminate enemies of the state. Each member of parliament belongs to one of Italy's many Political Parties, each which are based on favourite pizza topping. Currently, the most popular are the Pepperoni Party, the Extra Cheese Party, the Mushroom Party, and the Anchovy Party, although the Pineapple and Ham Party has gained many followers after tourism from Hawaii increased.

The Italian army consists mainly of Chef Boyardee look-alikes who would much rather be eating spaghetti bolognese than firing rifles. Thus, Italy rarely gets involved in foreign affairs, although it has an ever-lasting rivalry with France over who has the least productive military. This rivalry has even led to a series of French-Italian wars, which were basically races to see which side could surrender first. Surprisingly, Italy has the ninth most expensive army, spending over 38 billion dollars, most of which goes to fund a bridge over the Rhine. 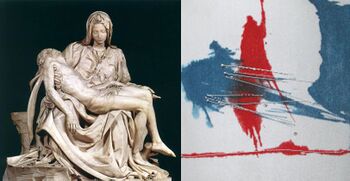 Early first century Roman art was more or less terrible, usually containing nothing more than a stone arch or an aqueduct. However, the Renaissance began in Italy in the late Middle Ages producing some of the only artists that Americans have ever heard of, including the guy who painted the Mona Lisa and the dude with the sculptures and that ceiling thing. With them came great works of art, mainly paintings of Jesus and other biblical figures and of course, pictures of naked people. Famous works include da Vinci's The Last Supper, a painting depicting the only biblical scene that involves food; Michelangelo's David, an early example of softcore pornography; and Botticelli's The Birth of Venus, a portrait of Roman Goddess Venus standing nude atop a seashell. After the Renaissance, though, Italy had little more to contribute to art, and modern-day Italian art includes mainly splatters of paint on a canvas or photographs of naked people, not to mention crude drawings.

From the fourteenth century madrigale to the fascist marches of the 1940s, music has always been near and dear to the Italians, who even went so far as to replace each and every musical term with an Italian word. Many popular musical instruments were invented in Italy, including the piano and violin, and the Italians were the developers of boring classical music, a feat that they no longer wish to take credit for. Italy is also the birthplace of special musical presentations in which overweight people loudly belt out incomprehensible songs for two hours, a spectacle that the Italians called opera. Today, operas are performed all around the world, in Germany, Russia, and even England, although the English would much rather listen to Pink Floyd or the Beatles.