You may be looking for Fullmetal Alchemist and not even know it! 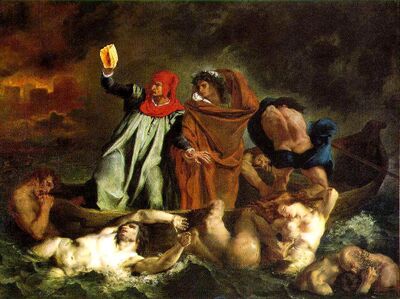 “Abandon all hope, ye who read this article.”

Durante degli Alighieri, referred to as Dante (1265–1321), is the greatest Italian of all times after the inventor of Pizza, Signor Anonimo, and the one who first added Pepperoni on it, Signor Silvio Berlusconi. Inspired by his father, the famous explorer Marco Polo, Dante explored the far east looking for new types of Pasta, but ended up in Hell. His travel diary was later found and published as The Divine Comedy. Thankfully, he was found 5 days later, and when he died, he went to Heaven.

At the middle of his life's way, he was in a dark forest. He was attacked by a panther, a lion, and a shewolf. He faced them easily, using his Dolce Stil Novo (Sweet New Style), a deadly Italian lyrical style that closely resembles Vogon Poetry. But then, he was attacked by a Grue. Luckily, his master Virgil was there to defend him using his 5 foot wide chode, the only known effective weapon against a Grue. Dante was so thankful that he promised Virgil he would follow him into hell, Virgil's last known residence. After a long trip full of adventure, feeling like a new man, he wrote La Vita Nuova (The New Life), his last poetry book. The book was dedicated to his beloved Beatrice. A few years later, Beatrice left him and decided to dedicate the rest of her eternal death to contemplate the Holy Rose. Angry Dante published the Divine Comedy as a vendetta, telling the world all the shameful things she used to do in hell back then. This action was severely punished by the ghibellini political faction, who conquered Florence from the guelfi, kicked Dante out, killed the pope, and declared Zork as the emperor of Italy. After that, Dante collaborated with Ludovico de Medici, for the writing of The Prince, an instruction book that explained to Machiavelli how to conquer Italy. And thanks for asking, but no, the American singer Prince has nothing to do with this.

For those without comedic tastes, the so-called experts at Wikipedia have an article about Dante Alighieri.

The Divine Comedy used to be divided into three parts, Inferno, Purgatory and Heaven. When the book was first published, it quickly became a huge success: everyone wanted to get news from their dead relatives and friends. However, nobody expected to find any known person in heaven or even in the purgatory, so the first two chapters vanished, just as Aristotle's book on Comedy and Umberto Eco's "The Name of the Rose". Readers were disappointed to discover that Hell only contained ancient philosophers, mythological creatures and corrupt popes. Nonetheless, they kept reading Hell for the enjoyable descriptions of ironic punishments and cruel tortures.

Readers were also surprised to see that the ninth circle of Hell was a freezing cold home for traitors, and not the burning love nest of Satan and Saddam, as pictured by Southpark's movie (Though, this would explain why in every Shabby Demonic Horror Film, the temperature plunges when the Devil is about to appear) . The only loving couple of the book, are Paolo and Francesca, two lame Italians, unheard of, who do not deserve to appear in an American movie not related to the mafia.

At the beginning of the twenty first century, many Creationists tried to find the lost chapter of Heaven, and so have scientific proof that Heaven isn't ruled by the Flying Spaghetti Monster. In spite of the million dollar reward that awaits the discoverer, the chapter remains lost.

This are some of the most representative ironic punishments in Dante's Hell: