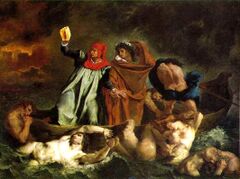 Virgil holding Dante on first base as part of the annual "River Styx Softball Championship Game".
This article is about the river. For the American rock band, see Styx.

Styx is a river in Greek mythology of which many know its name, without knowing its origin or what it really stood for. It is a river that separates the world of the living from the world of the dead. Styx winds around the Underworld (Hell is another name) nine times, and is one of five rivers run by Hades. The river contains endangered species such as Medusa and harpies.

The river's name comes from the Greek word stygian which means "hate", thus making Styx the river of hate. This river was so respected by the gods of Greek mythology that they would take life binding oaths just by mentioning its name, as referenced in the story of Bacchus-Ariadne, where Jove "confirms it with the irrevocable oath, attesting the river Styx." 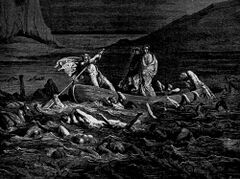 Nazareth Vercetti travels down the River Styx with gang members that he intends to deliver to Hades. Note the trail of misery he left behind.

Styx is a river between Gaia (the Earth) and the Underworld (Hell). It and four other rivers flow into a large central marsh, sometimes called Lake Death Styx. There are five rivers that separate Hades from the world of the living; they are:

For those without comedic tastes, the so-called experts at Wikipedia have an article very remotely related to River Styx.

It is thought that Charon, the moon of Pluto old ferry man who has the dead come sail away onto the underworld, crosses the river Styx where the dragon-tailed dog Cerberus guards, allowing all souls to enter but none to leave. This is a misconception; Charon crosses the river Acheron where also Cerebus stands his eternal guard. Also while on this subject, Charon only takes the souls across that are buried properly with a coin (called an obol) that was placed in their mouths upon burial.

If a god gave his oath upon the river Styx and failed to keep his word, Zeus forced that god to drink from the river itself. The water is said to be so foul that the god would lose their voice for nine years. The river is not the subject of any story itself but is mentioned in several. These little pieces give a wonderful view of not only the river but the ancient Greeks view of the underworld. From its Adamantine gates to its separate levels of Tartarus and Erebus onto the Elysian fields.

The river is also associated with Achilles, who was said to be have been dunked headfirst into it by his mother Thetis. This was apparently her attempt to give Achilles the power of invulnerability against weapons. However Thetis failed to immerse the child's ankles and so in a sandal-wearing era she left Achilles with two weak points if someone fired a poisoned arrow at his feet.

Years later, mortals heard that the river would give you superpowers, like Superman, or even Bizarro. So some woman decided to dunk her baby in the river so she could sell him on the black market as a superbaby. His name was Dennis DeYoung and he could rock! However, the mother again only submerged her child's head, thus giving him a high-pitched voice but no muscle strength. DeYoung founded a band that was also named Styx, because his head emerged from the river of the same name early one September morning. The sound of the band and the sound of the river are pretty much the same. The only real accomplishment of the band was getting their song "Come Sail Away" to be sung by Cartman on South Park.