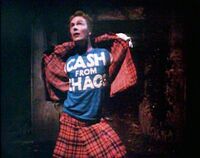 One of the things you can get from chaos: tartan.

Chaos is a state of nature where everything is up in the air, headless chickens are running amok and someone has rammed their car into the one in front. All these things spell 'C-H-A-O-S' or in Greek..Χάος. Change the O for a V and you will also get CHAVS but that's for another article. 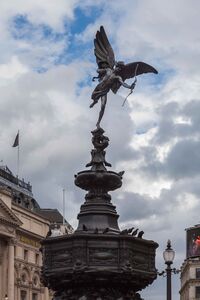 Strictly speaking, Chaos as the Greeks understood it was a big black hole of nothing. It was actually a Greek God of a type but one without statues or temples. Chaos didn't do much but somehow created out of nothing: Gaia (The Earth), Tartarus (Hell), and Eros, the little naked boy in Piccadilly Circus firing his arrows up lovers backsides in London. So 'Chaos' sounds a bit like God but with zero small talk.

For those without comedic tastes, the so-called experts at Wikipedia have an article about Chaos.

Along the way the word Chaos changed its meaning from a chunk of nothing into a traffic jam on a motorway on a Friday night. Traffic reporters love the word, to them Chaos spells loads of work! Updating every five minutes like an overexcited children, we soon hear that everything is in chaos and there is no hope. It's all become a bit too chaotic. Pass me a bottle.

There are other Chaoses. The one that causes bankers to shit their pants when they watch shares being sold off and they've been left holding the baby. The chaos that Malcolm McLaren claimed to have done to the music industry in 1970s Britain with the Sex Pistols. Chaos equals money or an Irish actor in Game of Thrones claims - 'Chaos Means Opportunity.'

Weather never behaves unchaotically because it is a force of nature. Since the natural world is not normally regarded as sentient, all the true Chaos events are cause by the hairless apes we call people. So if less people stopped being around, chaos would suffer loss of confidence.

Why isn't it spelt 'Kaos'[edit]

Greek spelling which the Greeks have long dropped but kept on in England because...Public Schools and Boris Johnson. So the word is written one way and spoken in another. That's English for you. Most other countries spell it as Kaos.

Difference between Chaos and a Fuck-up[edit]

Going back to traffic reports. I am sure it would be more honest to say on air "There's a massive fuck-up on the M4 tonight because some tosser has rear ended a little old lady's Austin 7 whilst taking selfies of his penis..." but instead we just get the one word 'chaos' to cover all those eventualities.

Funny that. People may say it but often can't spell it to save them just hitting the car...Ok I'll come quietly Robocop.