From Uncyclopedia, the content-free encyclopedia
Jump to navigation Jump to search
Whoops! Maybe you were looking for Punk Floyd?

“Johnny Rotten's a wanker, and that's all there is to it.”

~ AC/DC on the subject of punk music 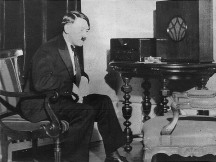 Hitler listens to "Bodies" on BBC1.

The Sex Pistols, also referred to as 'The Reproductive Firearms' by the politically correct, were a team of superheroes dedicated to the ideals of Truth, Justice, and Anarchy in the U.K. They invented the famous phrase, "Just say fuck, I already did all those drugs."

Their early history has often been overlooked, but it is a well known that, for a brief period, they were Knights of the Ku Klux Klan. Then one day, they met one man - a man of ideals and great virtue - who introduced them to drugs. Now convinced that the movement was for "wankers", they left the scene and sought new territory to put their skills to use, and so decided to enter and win the Anarchy's next top model competiton. The band consisted of Johnny Rotten singing, Sid Vicious on standing there stoned, Glenn Matlock on bass, Paul Disagreeable on guitar, Franklin Rather Unpleasant on drums, Your mom on didgeridoo and William Gentlemanly III on Nose Flute.

In gratitude, and because he was obviously the most talented of them all, they allowed Vicious to name them after his maternal grandfather, Sir Sexton G. Pistol McLaren (contrary to the popular belief that they are named after their magic handguns which impregnate women).

Since then, the Sex Pistols have changed the world, rebuilding London using only the power of their minds, rescuing schoolgirls from Joni Mitchell, defeating Soviet Russia, and single-handedly giving birth to many strapping young boys.

The remaining Sex Pistols now reside in the small sailing town of K'th'k't. Tragically, Sid Vicious died of boob suffocation in 1979, due to complications from the giant boob that grew on his head. Johnny Rotten's house is a cardboard box. Small children knock on his box, and then run and hide around nearby corners. "Oi," they snigger with glee as they hear him mumble "Hegutghfgeryibestads." Now there is an asshole named Glen Matlock claiming he was the bassist before Vicious. He is now dead. His charred remains are now scattered throughout the world.

Aside from numerous covers of his songs by Frank Sinatra, Sid Vicious is also known for inviting Adolph Hitler to become a member of the group. Unfortunately for music fans everywhere, Mr. Hitler was already engaged in a terrible war with Great Britain, and refused to sing the lyrics to God Save the Queen, merely "on principle." Mr. Vicious promised to become a first-class anarchist in an attempt to prove his antisocial political views to a disillusioned Hitler, but to no avail.

Sid Vicious is also famous for teaching Lemmy of Motorhead to play the bass. Sid Vicious invented "lol", sneering (later stolen by Billy Idol), and the bass knife, which later was used on the infamous Bollock (see below). According to common knowledge, Vicious' Bass Lute was crafted from a single tree, grown in the orchards of Ventongimps

“That dude is one far out drummer, man.”

~ Sid Vicious on Hitler (after taking some bad shit)

“I can't believe its not heroin”

“That man can fuck. And I mean REALLY fuck.”

~ Hitler on complimenting the Sex Pistols

It has been said that the world has the Sex Pistols to blame for its constant abuse of "bollocks." As we all know, "bollocks" is really just a euphemism for "dirty, whorish sex with prepubescent polar bears." Apparently, the band became interested in this activity as a form of quasi-religious worship. It seems fairly certain that they started a cult, just so they could molest more polar bears and, in so doing, claim a large tax deduction. Though it cannot be proven, Michael Jackson is thought to have been an original member of this cult, joining primarily in the hopes of suppressing his latent pedophilic tendencies. Though it completely failed, current cult leaders (such as Fred Phelps) continue to incorporate this story into their internal dogma.

Michael Jackson was never asked to join the band, however, on account of being considered a "queer." Sid Vicious participated in his "Something Else" video, in which he is shown wearing a thong walking around his room. It is commonly known he participated in the making love to the polar bears before the video was filmed.

Of all the band members, Keith Richards was found to have ingested the smallest amount of dangerous drugs, based on average measurements of drug-to-blood ratio over time. Sid's ratio of liquid heroin to blood was well over 100:1, and at one point he had to be hospitalized when trace amounts of actual urine were found in his urine. Nevertheless, no member of the Sex Pistols ever admitted to any drug use whatsoever, and it is a certainty that drugs had no effect on their music, other than to make it much, much better of course. Nowadays a bottle of Keith's blood can get you so fucked up, you'll think you've just huffed an orange kitten. 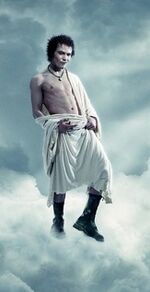 Sid waits outside hell for his chance to enter

Little is known about the breakup of the Sex Pistols. Conspiracy theorists have long surmised that Satan himself was involved. According to rumor and conjecture, the Prince of Darkness was angry at the group for not being able to recruit Adolph Hitler to play the drums (not to mention himself as a backing dancer). Hitler and Satan had a previous association in a former decade, and were known to be good friends, and Lovers. Furthermore, when the Dark Underlord discovered that Sid was sleeping with Fred Phelps, he decided this was the last straw. (Fred and Satan have, indeed, been estranged for quite a number of years.) At any rate, it is assumed that Lucifer himself made the fatal phone call to 911 reporting the location of Sid and his then-girlfriend, Nancy Spungen (who was at the time pregnant with George W Bush Jr), as well as the quality of their heroin. The rest, as it were, is history.

“Either he apologizes, or he can sit out there with his thumb up his ass for the rest of eternity.”

It is known for a fact that Satan reserved a special place in purgatory for Mr. Vicious, just across from the wine and cheese table. Apparently, their falling out has kept the group members from their rightful place in Eternal Damnation.

Johnny Rotten confirmed he had AIDs at a gig in London, when singer and presenter Duffy went to console Jonny Rotten about AIDS, he reportedly try to infect her, Duffy cried all night about this. Rotten has since been trying to give women AIDS and has been arrested by cellophane wrapped policemen and thrown into Dartmoor prison for AIDS infectors, he is roommates with Richard Dawkins and Osama Bin Laden.

The rest of the Sex pistols have confirmed that they haven't got AIDS but an investigation by the BBC has revealed there may be liquid AIDS present with the sex pistols, Barack Obama has endorsed this find and hopes that the sex Pistols won't thrust anyone. 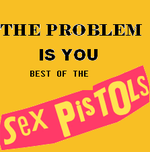 In late 2005, a best of album of the Sex Pistols was released, titled "The Problem is You, Here's The Best of the Sex Pistols" The Graphics of the album were applauded for including four different colours including lemon and gold.The twelve featured songs included; "Seventeen" , "Bodies" , and "Electric and Musical Industries Ltd" (otherwise known as "E(and).M.I.(Ltd)"). The album was released to coincide with the Queen's Birthday, and was presented to her majesty gift-wrapped in white, red, and blue striped paper (not to be confused with Wally's long-sleeve off "Where's Wally?" (or Waldo for those whom don't speak Australianese)). It was later found discarded with some of her other standard presents such as socks and humour mugs with quotes such as, "You don;t have to be MAD to work here but it helps!!!"