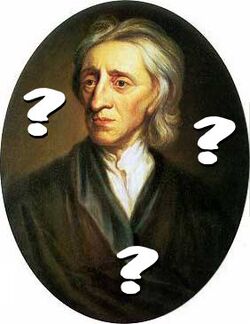 John Locke - philosopher, ontologist, and hopelessly Lost.
This article is about the English philosopher. For the bald guy from the TV show Lost, see John Locke (Lost TV series).

“I can't believe I have such muscle tone after being stuck in a chair for years.”

~ John Locke on himself

John "Danger" Locke (29 August 1632 – 28 October 1704), also known by his stage name J-Lo, is a fictional English philosopher based on the real John Locke from the hit TV show Lost. He is founder of the DHARMA initiative, and is not famous for his primary quality and second quality distinction. He also invented the wheelchair and the personality of the geek.

John Locke is also a main character in the hit TV Series Lost. In the third season it is revealed that he was never paralyzed, he was just a lazy guy who allowed his evil daddy to defenestrate him. His alternate personality (he had dissociative identity disorder) was Jesus of Nazareth.

John Locke wrote many philosophical works which were very boring and hard to read, so they were only bought by insecure people who wanted to seem intelligent by owning them. His main contribution to philosophy was the ignoring of many unpleasant truths pointed out by Thomas Hobbes. Therefore, he is mostly remembered today for his knife-fighting skills (on Lost he enjoys throwing knives at trees). One of his most famous duels was that against Jean-Jacques Rousseau, Danielle Rousseau's brother. A drunk Rousseau claimed that people were better in a state of nature, and corrupted by civilization. John Locke was voted "sexiest political philosopher" by Time magazine, beating Karl Marx, Gandhi and even Plato!

Locke went around proclaiming that the people were the source of all political power. He spent many months in a mental institution because of this democratic attitude. This is the origin of the phrase 'crazy as Locke.' John Locke eventually went on to assassinate Grover Cleveland using his insane ninja skills (see the Jee Man) and was imprisoned for 11 months after being released by Socrates and Ubermensch.

He also created a modified form of the ontological argument for his existence, which follows:

Premise four does not follow, but it is typical Locke logic to pull conclusions out of the air. (Don't even try telling him what he can't do; he thinks he's Jesus, remember?)

For those without comedic tastes, the so-called experts at Wikipedia have an article about John Locke.

Locke was also famous for the way in which he died. He once challenged Prince Albert to give up his place as successor to the throne and give it to Locke. Since Albert believed in the divine right of kings, Locke argued, he had nothing to worry about: under the theory God would never let a believer in popular sovereignty ascend the throne. This culminated in the War of Locke, also known as Warlock. The term warlock originated from this war, because John Locke was mistaken for an insane sorcerer by artist Pablo Picasso. The day the King died, Locke was tragically maimed by the cyborg arm and laser eye of the time-travelling Jesus Marx.

John Locke is also the father of Knuckles the Echidna. Knuckles was born when John raped an echidna at the zoo while helping her to escape, like the so-called coyotes that help Mexicans across the American border (that's where Mexican werewolves come from). Knuckles was born, and swore to protect the Master Emerald, AKA the Manhattan Project. So whatever you do, keep John Locke away from echidnas. Or hedgehogs. Or porcupines. Actually, just make sure he stays the fuck away from any animal.

Oh, and never ever tell him what he can't do!

John Locke is also known for experimenting on dinosaurs, he hides all the dinosaurs in his under ground cave: Lockeness monster.

He was also famous in his time for inventing, the LOCKE. Of course, this was much different from the Lock, invented by Thomas Jefferson, Locke's third cousin. This was a machine that was supposed to unlock Thomas Jefferson's LOCK but it was too easily confused.