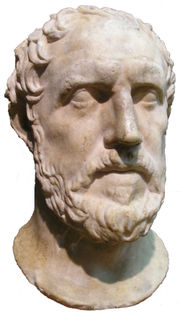 Hypocrites, shown here, was a famous critic of facial hair, claiming it was something "more fitting to a dog or lion", but thought that his beard was quite regal.

Hypocrites (450-339 BC) was an influential Greek philosopher of the fifth century B.C. and the founder of the Hypocritical school of philosophy. He was most famous for devoting his entire life to preaching a philosophy of the virtues of Honesty, humility, sobriety and chastity, while at the same time practicing the virtues of deceit, arrogance, lechery and dishonesty.

Hypocrites is perhaps most notable for his magnum opus, the six-part treatise Do As I Say, Not As I Do, which is, to this day, influential especially in hard-line Christian evangelical circles. The Reverend Ted Haggard, for example, is a noted follower of Hypocrites, and is considered a leading scholar in the field of Hypocrisy.

Born in the city of Hippo, the child of a banker father and a snide mother, Hypocrites grew up appreciating the fine art of rhetoric. He attended the finest of Greek academies, under the tutelage of eminent philosophers such as Idiocrates. Once, when he was 16 years old, Hypocrites was pressed, by another student, on the subject of slavery. Was it not true, argued this student, that slaves were merely people, like any other, deserving of the same freedom? Yes, agreed Hypocrites. Well then, continued the student, doesn't it follow then that your family should give up its many slaves and set them free? No, said Hypocrites, for if we did that, then we would be forced to cook our own food and do our own laundry. For many years this was considered an ironclad defense of the practice of slavery.

Hypocrites got his first employment as a scribe, where he quickly made a name for himself by mentioning the importance of diligence and probity in the office. He then quickly ascended to the rank of Juror, through bribery and blackmail, as well as through the public dissemination of certain facts injurious to the person of his chief rival, Naivetous, among them the rumor that Naivetous could not be trusted and often gave advice contrary to what he in fact would do.

Hypocrites argued that the body was a temple for the soul, and that one should therefore consume only healthy foods, such as fruits, vegetables, and whole grains. Hypocrites himself subsisted entirely on cheese steaks slathered in bacon grease, usually soaked overnight in boiling oil to enhance its flavour, which he ate three at a time seven times a day, and washed down with a pint of Carlsberg. He explained that by so doing, the apparent contradiction between preaching the virtues of healthy eating and while gorging himself on unhealthy food would reinforce the dualism of the psyche and soma, improving his health and stimulating his mind.

Hypocrites prided himself on being a good role model to the youth, which he best summed up in this maxim: "I do these terrible things to myself so that I might show others the error in their ways." Hypocrites thought that by partaking of these pernicious (though delicious) foods he might set the example of the slovenly elder. 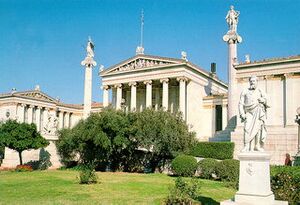 Hypocrites was noted for his advocacy of an ascetic lifestyle. Shown here is his 200 acre mansion, one of six inside Athens proper.

Hypocrites was, unsurprisingly, one of the greatest statesmen of Ancient Greece. He was a tireless champion of justice and peace, as evidenced by his time in office, whereby corruption and graft grew feverishly, and Athens went to war four times.

Hypocrites pledged to free all of Greece's slaves during his tenure. Nearly all slaves were subsequently removed from ownership by the private citizens of Greece, and were instead transferred to Hypocrites' fabulous country estate, which acted as a sort of "halfway house" so that the slaves might someday be able to function in everyday society. There the slaves were tutored in the fine arts such as picking olives, washing clothes and serving meals. A number of these slaves even took part in some of Hypocrites' famous auctions, from which people from far and wide would attend to buy priceless items that had somehow been lost. One man in particular, Augustus of Samos, tells of his good fortune at one of these auctions: "Hypocrites' soldiers came onto my premises with spears and shields drawn, and proceeded to take away from me my slaves, my priceless family pottery, and even my wife. They left me a note saying that I could retrieve these items at a sale to be had later that day. I managed to get most of my goods back, though it cost me several hundred drachma, and the items, even my wife, were worth only half that on a fair market." Stories like this abound during Hypocrites' time as governor, tax collector, and emperor.

One of Hypocrites' most famous teachings was the teaching of humility. It was said many times that Hypocrites was the humblest man in existence, indeed, the humblest man who had ever walked the earth. This was mainly said by Hypocrites himself, as he endlessly traversed the ancient world, preaching about the value of humility and of how he stood as a shining example of humility to inspire the "wretched, disease-ridden masses", as he denoted the common man. 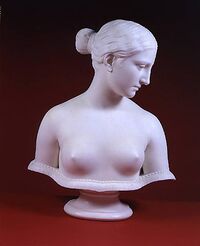 Oedipa Maas, shown here, was one of Hypocrite's most diligent pupils. She studied at his knee for nearly 15 years, until she was horribly injured in a horse-riding accident.

Hypocrites was also a strong proponent of chastity, which he argued was the most noble and pure of all virtues. So strongly attached was he to this ideal that he traveled almost every night to Athens' brothels so as to promote his philosophy among the harem, as he felt they were most in need of his lessons. Hypocrites was known to teach the virtues of chastity to two or three prostitutes at once, often until the early hours of the morning, when the sheer effort of his tireless tutoring performance would exhaust him completely and he was often found sleeping in the beds of his students.

Hypocrites' love for chastity can probably best be surmised from his desire to always be around virgins and others pure of heart. Often he would require their presence, sometimes several at a time, sometimes alone, for "philosophical education and physical recreation." Little is known about what transpired during these bed-side chats, but this can be surmised: there were rapturous experiences, as evidenced by the sounds emanating from his chamber. Hypocrites is often quoted as saying "A bushel of virgins and a bushels worth of olive oil is all I need in this world."

Perhaps the only other virtue Hypocrites was so strongly devoted to was the virtue of honestly living one's ideals. Hypocrites was a tireless critic of those who professed an ideal, but acted otherwise, often excoriating them as utterly dishonest and morally corrupt. Yet Hypocrites often exempted himself from such criticism, claiming that he was merely demonstrating to others how the people in question behaved. For instance, he tirelessly attacked Aristotle for preaching moderation but eating too many olives during a party, and criticized Plato for promoting ethics and justice, but having once eaten a grape at a fruit stand without paying for it.

Of note is how Hypocrites managed to find numerous inconsistencies in the behavior of most, in fact, all of Greece's other notable statesmen and philosophers, while at the same time remaining perfectly true to his teachings. It truly is a testament to Hypocrites that, as others floundered in their beliefs, he managed to behave in a most carefree manner, as if he were totally unburdened by responsibility.

Another area in which Hypocrites was a leading figure was in the condemnation of violence. A tireless pacifist, Hypocrites would notably refuse to partake in violence and would in fact help those who meant him harm. Often, when he was pressed by ruffians in some of the gambling halls he frequented, Hypocrites would, to show the odiousness of violence, smash a chair over the head of bystander, and then quickly remark "The depravity!" under his breath. It is thought that only by impressing the ugliness of violence upon his fellow Greeks could Hypocrites ever hope to reach their dull, sullen hearts.

Hypocritical Philosophy in the Modern Era

The Philosophy of Hypocrites has undergone a major resurgence as of late. Probably the leading advocates of a return to Hypocritical ideals are the Christian fundamentalists and the Republican Party. Long known for their philosophical acumen, these groups have refined Hypocrites' teachings to their logical best. For example, when the Republican party makes its platform one of fiscal conservatism, and then proceeds to amass record-breaking deficits, the intellectual capital is clearly borrowed from the great Hypocrites himself. Perhaps in this, more than anything else, the level of scholarship and intellectualization behind modern conservatism can be best summed up.

However, the Democratic Party is hard at work attempting to beat the Republicans in establishing the true Hypocratic practice. President Obama, for example, ran for office on the platform of not going to war over weapons of mass-destruction like his predecessor. He then proceeded to tell North Korea, "Stop building those rockets, guys. We mean it. Stop building those things, or else." He has also stated, "It might be a really long time - like, forever - before we get those troops out of Iraq like we said we would. Because, well... anyway, it's Bush's fault. Thank you."