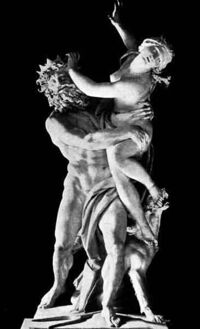 'You'll like it down there Persephone. Just you, me and my three headed dog'.

For those without comedic tastes, the so-called experts at Wikipedia have an article about Hades.

Hades (Pluto to the Romans as they thought of him as a bit of a dog) is both a Greek God and a place where people go when they die. Florida being closed for the season. It is a grim place unless you get a ticket to run and jump about in the Elysian Fields. Suitably, it therefore ruled by an equally cruel tempered supreme being and his wife Persephone (unless she is shopping in the Olympus Mall six months non-stop).

Unlike Satan who is shown as an ugly demon, Hades by contrast is portrayed as a well built man, if a bit heavy and beardy for today's tastes. He doesn't go upstairs to tempt men into sin but is partial to wood nymphs if he can catch them when wearing an invisible helmet. Hades prefers to stay down stairs and doesn't like socialise with the other Gods, especially his brothers Zeus and Poseidon. He is convinced they gave him the shittiest three way partition of the goods when the brothers overthrew their father Saturn. So Hades would argue, he isn't gloomy by nature but living without natural light is not healthy for the moods.

This suits Hades as one of his entertainments is cranking up the punishments on those who had committed the worst offences. Since the Ancient Greeks were quite relaxed about sex, the hardest tasks are reserved for bankers, currency fixers and members of the Michael Bay fan club.

Despite its bright and cheerful domingo, the Underworld is believed and presumed by many to be a single 5 by 5 metre room somewhere in infinity. This creates a dilema at times, when scholars argue that with all that space, there will never be enough people to fit within it. Many think it is because the Underworld is assumed to have pink wallpaper as well as a pink fluffy pillow somewhere within the cavernous space of the Underworld.

The Underworld itself is believed to have only one entry, a tiny glass window which the deceased must squeeze through to gain access to the Underworld, only after being chased by and escaping Hades' pet and Underworld guardian - Fluffy. Despite previous assumptions about 'Cerberus', a three headed dog, religious believers were shocked by the 23rd Edition of the Holy book - 'Me, Myself and Hades' which contained knowledge about a much fiercer and powerful guardian - Hades' Pygmy Goat Fluffy. Cerberus has since been found to reside further in the depths of the Underworld; it acts as Saddam's protector, pet, and new boyfriend. 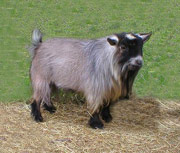 The Underworld Guardian. Its innocent look has already spelled Doom for countless people...

Despite its weak and cute appearance, a deceptive guise, Fluffy is able to do +5 attacks a turn with a +20 strength bonus for a -2 mana loss. Fluffy is level 255 and the n00bz get pwnzered with his instant "ub3r pwnt" attack (666 damage per second). It knows the moves Hyper Beam, Seal of Hades, Bloodlet and Soul Suck. Faced with these odds around 90% of people never make it to the Underworld and are forced to camp outside the entrance using nothing but their clothes and human hair.

Hades is also city located in St. Clair County, Illinois, USA, directly across the Mississippi River from St. Louis, Missouri. As of the 2000 census, the city had a total population of 31,542. One of the highlights of the city's waterfront is the Gateway Geyser, the world's tallest fountain, which spews water to a height of 600 feet and is designed to mirror the Gateway Arch across the river in St. Louis.

Hades still lives to this day, in fact he's starting to adjust to social networking. For example he has a Twitter. You can follow him here: www.twitter.com/UnderworldHades And you can also like him on facebook: http://www.facebook.com/pages/Hades/52554583442?v=wall He is funny and very sarcastic. He is too chill.