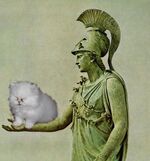 Athena respects tasteful things, such as this Persian (The first to be kitten huffed)

For the religious among us who choose to believe lies, the so-called experts at Wikipedia have an article about Athena.

In Greek mythology Athena is known as the Goddess of Wisdom. She was also a protector of heroes and owls. Later on female Geeks adopted her too as they liked it how she could take on the boys and win. Athena preferred the company of men and would often dress like one with her short cropped hair tucked up inside a huge plumed helmet. She also was a work out fanatic and kept her body trim. Athena claimed she was a perpetual virgin and that no man would defile her. No mention was made of women so many Lesbians have claimed her too. Athena was very keen on Odysseus

Athena lived on Mount Olympus with the other Gods. When she wasn't there, you could find her hanging around with the Greek superstars like Heracles, Theseus and Perseus. The latter promised her the head of Medusa which Athena then stuck on her shield when that became mission accomplished. Medusa had once stolen Athena's lunch box when they were at school so that feud was very personal. Athena was very keen on Odysseus and saved him many times on his return back from Troy. The Mount Olympus rumour mill suggested their relationship was more than it appeared but Athena always denied she had let slip her vows. Her great rival the Goddess of Love Aphrodite tried everything to get Athena in love trouble but never succeeded. 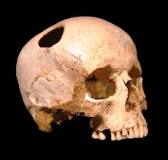 Athena is said to have born via her father Zeus's head. Her mother Metis had disappeared eight months previously, an absence explained by Zeus that 'she had gone a world cruise'. The truth was Metis had been swallowed by Zeus in one of those sex games the Olympians liked to indulge in. Metis was ten times cleverer than any Greek and Zeus hated 'brainy birds'. Despite this, Metis's baby daughter Athena grew up inside her father's body like a tumour. When the pain reached Zeus's head, he had painful headache and told his other Olympians that he was convinced he had cancer of the brain.

Eventually Hephaestus persuaded Zeus to sit still whilst he did some amateur trepanning. The moment half of Zeus's skull fell off, out burst Athena fully grown and shouting abuse. Hephaestus claimed Athena as his 'reward' but Athena refused and grabbed the tablecloth before stomping off to the ladies room at Olympus to freshen up. Zeus declined to give his daughter to Hephaestus and instead gave away Aphrodite as the blonde booby prize. Very apt.

This didn't stop other Gods wanting to have her as their bride/sex slave. Athena turned them all down and said she wanted an education instead and learn military skills. Zeus accepted this deal, guilty how he had treated her mother. 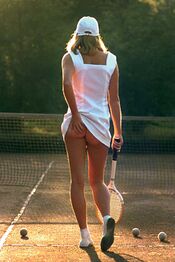 Athena took up 'no knickers tennis' to keep her mind off sex.

Athena took on the job of Goddess of Wisdom and Geekiness. She also got to wear armour which was useful when she worked as a teacher at local secondary school. Athena also liked to practice down at the gym on goddesses only days. Zeus's sister-wife Hera said she developed 'too much muscle' and Aphrodite said Athena had the head shaped like a potato. The other sporty goddess Artemis ran faster than Athena but she had an advantage in wearing only a skimpy tunic. Athena's only peculiarity was that she could only play tennis without wearing any panties. Athena said she 'needed natural ventilation' when hitting balls across the net. This naturally ruled out mixed doubles with the other male gods.

The Goddess's symbols were the Owl and the Pussycat. Athena always carried an owl around with her, usually perched on her shoulder. It would often disappear and then return to chew a vole whilst others talked to her about politics and the consumer society. Eventually the owl was stuffed and placed in the night sky as the Constellation Barney Owl.

Losing her owl forced Athena to take an interest in Greek men. Her tastes were quite varied. She liked Achilles as the sister she never had and Odysseus because he made her laugh with his tricks. Athena was also keen on anther Greek hero called Diomedes. He received special favour when he stabbed Aphrodite in the hand for interfering in a battle Athena had money riding on the outcome.

"Fuck off and go spin a web Arachne.' Athena losing it.

Athena was at first a bit of a less vindictive goddess. She blinded a man for seeing her naked in the shower, dismissing his complaint that he was a plumber called out to fix a leak. Other gods would have turned him jackass or a fox to be pulled apart by wild dogs. Athena was less forgiving with women who called her out. One called Arachne challenged Athena to a 'knit off' contest. Athena was judged the loser but took her revenge by ripping up Ariadne's finished garment with her teeth and turned the unfortunate woman into a hideous spider. "There Arachne..weave and sew all you like, the only thing you'll win in future are flies to suck their juices out". As an added bonus, Athena gave Arachne a terrible skin to be getting on with.

Another woman to get her arse kicked was Medusa for shagging in a temple dedicated to Athena. The Goddess turned Medusa in a snake haired monster with a forked tongue who could turn others into garden statuary if you were unwise to look into her eyes. Eventually Medusa proved to be a bit of a family embarrassment so she 'inspired' Perseus to knock Medusa's noggin off and bring it to her as a new shield adornment. Athena may have been the Goddess of Wisdom but she also had very broad mean streak.

Athena is often called Pallas Athena. This means "the flashing-eyed Athena," an effect she achieved with electronic contact lenses. The electricity was supplied by Mesopotamian batteries made out of clay pots with lemon juice in them. Athena also liked singing David Bowie songs, though living 4000 years before him she claimed them all her own copyright.

Is There Any Proof That Athena Is/Was A Lesbian?[edit]

She now makes a living selling posters of sexy 'female' tennis players showing their bottoms. However, the tennis player in question is said to have actually been a man, alldhow it has been confirmed that she has had children with other godesses , so who knows? On the other hand her sister Artemis was DEFINITELY a lesbian. Makes you think, dunnit?

What about that other Athena? The one from those video games?[edit]

What, you mean the purple haired one who keeps changing her clothes and sings while beating up people? Why the hell would you want to care for her?

If you still do care about it, look here and here, then follow up the instructions and/or wait on that chair until a grue attends you.