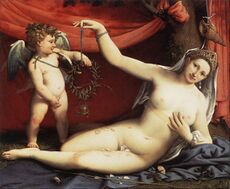 Eros takes the piss.Aphrodite laughs it off.

“I'm in everyone's naughty thoughts but I get to do them too!”

“That Golden Apple is definitely mine!”

Queen of the dirty girdle, born from the sea-washed genitals of another god and add a bit of foam on top, and you have Aphrodite! She was the prettiest of all Greek Goddesses, shining in the sky at morning and at night as Venus. If she wasn't doing any of this she was making out with the God of War Ares behind her husband's Hephaestus back. The Prudes hated her and tore down her temples when they imposed the monotheistic religions of Judaism, Christianity and Islam.

That Aphrodite was something of Olympus's good time girl doesn't mean she could be really bad if you got in her wrong side. She couldn't kill you with a weapon like Zeus's with his thunderbolts or Poseidon with his trident. No, her weapons were far more subtler. Weaken an arrogant he-man where it will always hurt. His sexual pride.

Aphrodite arriving on a surfboard in an updated version of her birth myth.

The Ancient Greeks were quite honest with their myth of Aphrodite: Her 'father' was Uranus's severed penis and balls, cut off by Cronus in an example of godly power play. Mixing freshly severed bollocks and salty sea water produced Aphrodite who emerged from the sea on a giant sea shell. Stepping on to shore, Aphrodite used her long blonde hair to create herself a one piece bathing suit to avoid arrest for indecent exposure.

The position of Goddess of Love, Beauty and Nail Manicurist being vacant, Aphrodite applied for the job and was installed on Mount Olympus. The male Greek Gods all wanted to be first to bed her but Zeus decreed that first she had to marry Hephaestus, god of bending metal over a hot furnace. Aphrodite expressed disgust and kept a separate bedroom where she instead entertained Ares, Hermes and Apollo. Aphrodite didn't say no to older gods either. With Zeus she gave birth to a god with a gigantic penis. He later became the god Priapus.

The other female Greek gods distrusted her and tried to get Aphrodite into trouble. She turned inspired lust or envy in all of them. Aphrodite even got the prim prude Athena to take off her clothes in a beauty contest for a bunch of Golden Apples (see below). Aphrodite won that contest.

Aphrodite was soon producing children without apparently going through the agonies of pregnancy and comfort food eating. From her busy hips came forth Eros the God of Love (father unknown), Harmonica, the Goddess of the Mouth Organ and Hermaphroditus, God/Goddess of the Transgender. She also got her sweaty palms on mortal catwalk posers like Adonis and Aeneas, a participant in the Trojan Wars and the supposed founder of the New Trojans - aka Romans - when they moved to Italy. None of the children inherited all of Aphrodite's looks, though Hermaphroditus certainly had his mother's knees. He would later try to 'merge' his body with a local nymph and the result wasn't pretty.

Eros refused to grow up and kept his baby wings on till he later met Psyche, the Goddess of Soul and all round rapper with a prodigious 'Afro-dite' which she grew out in honour of her mother-in-law. Aphrodite saw the funny side and had Psyche persecuted which undoubtedly screwed her up and led to a slight name change to Psycho. 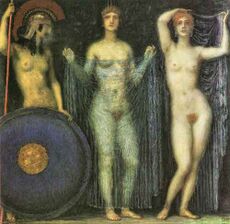 Aphrodite's sexual appetite gave her Ares, Apollo and Hermes as her ready bed partners. Apollo was intelligent but had a nasty cruel streak whilst Hermes was a 'fast in-and-out immortal' and a very selfish lover. Aphrodite preferred Ares as he was handsome, fantastic in bed but so useless in his main job as God of War that Athena always beat him on a battlefield. Aphrodite also had a liking for mortal lovers. There was a catch. They would grow old and very wrinkly like Anchises by whom she had a son called Aeneas. It was best they die young like Adonis and not grow love handles.

Aphrodite didn't get on with the other female goddesses. They resented her peach-perfect body and easy smile. Artemis said Aphrodite's breasts 'drooped' and Demeter expressed the view that testicles and sea water were not a good mix to produce a supposed 'Goddess'. Aphrodite's biggest rivals were Athena and Hera. Athena was about the same age as Aphrodite. Athena said her body was 'purer' as she had never been touched by a man (the Greeks don't mention women so that leaves that option unspoken) whereas Aphrodite's had allowed hers to be 'pinched and pawed' by all manner of gropers. Hera said that only a mature motherly woman was truly beautiful and truly converse with the ways of making love. This is commonly called the MILF argument.

This dispute would have gone into infinity until a Golden Apple inscribed with the message 'To The Fairest or Failing that, the Best Goer' was thrown into a party by another disgruntled goddess called Eris. This lead to a cat fight as Aphrodite, Athena and Hera fought each other for the fruit. To prevent further hair pulling and eye gouging, Zeus decreed that the decision about who to give the apple to could only be decided by a mortal man. Zeus had just the candidate, a Trojan hair flicker called Paris, known for his rude art work involving plaster.

Aphrodite, Athena and Hera arrived at a remote hillside out Troy for the final. With them came Hermes to prevent further aggro and make sure promises were kept. Hermes gave Paris the apple and told him to decide. To extend the suspense, Paris introduced some new 'rules' that included the goddesses going nude and providing him with a enducement/appeal to reason/bribe to make up his mind. Deciding Athena was too toned for his liking and Hera coming across as the mother-in-law from Hades, Paris picked Aphrodite. He preferred blondes. Aphrodite got the apple which she took home with her and made it the centre piece of her new Olympian villa.

Aphrodite's temples became known as the spot for 'sacred prostitution'. Love Pure and Love Behind the Bike Sheds were catered for. The Romans would later claim Aphrodite was Venus and that they were all descended from her via Aeneas. Since the Romans were imitators and ruthless conquerors, it seemed an odd fit. In the Greek speaking East she was still known as Aphrodite and when Jerusalem was rebuilt in 135 AD, a temple was built over the site of Christ's supposed crucifixion site. So for the next couple hundred years a site sacred to Christians was dedicated to the Goddess of Love.

By the time of Emperor Theodosius the Great, all pagan worship was forbidden and the temples and sanctuaries closed down or destroyed. Aphrodite's worship survived, albeit in private and with the help of creams and vaseline. Her temples are now found elsewhere but they are now called nail bars.

The Romans preferred to call Aphrodite 'Venus', another obscure Latin Goddess. However the name change was a boost for those who read the 'Vulgar' poets with their desperate rhyming couplets.