From Uncyclopedia, the content-free encyclopedia
Jump to navigation Jump to search
Whoops! Maybe you were looking for Oedipus Rex? 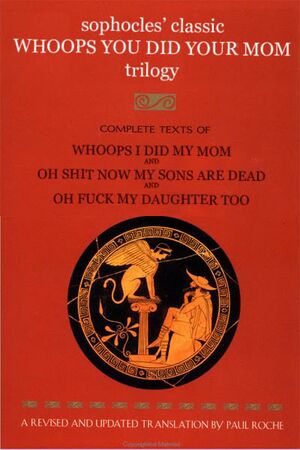 Oedipus was the world's first motherfucker, and is considered by some to have been the most badass motherfucker of all time.

The works of Oedipus had profound influence on Sigmund Freud and Ludwig Wittgenstein. Freud, moonlighting as an architect in masochistic submission to Frank Lloyd Wright, designed and built the Oedipus complex in honor of his hero. The complex, the world's first religious edifice devoted solely to the art of badass motherfuckery, stands sixty-nine feet higher than the neighboring casino of Little Thebes, Las Vegas. 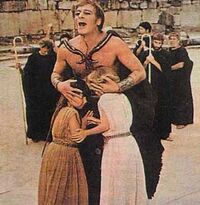 Oedipus loses his claim for a disability allowance but gets to keep two virgins in compensation.

Despite the sheer diversity of his many egregious works of pornography, Oedipus's recognized masterwork remains Oedipus: Prince of Thebes, co-starring his real-life mother wife Jocasta.

In this epic tale of curses, cusses, swears, foul language, motherfuckery, and fate, Oedipus reprises his earlier role as the Prince of Thebes. Having bested the Sphinx in a hand-to-paw contest of riddles and hardcore furry bestiality, the Prince establishes himself as rightful ruler of Thebes. With the throne comes the fabulous Drag Queen of Thebes, who becomes his ... er ... bride. The Prince and the Drag Queen shack up and start popping out sprogs.

Yet soon the bustling city is ground to a halt by a terrifying plague -- a plague of motherfuckery. Across Thebes, young men fall in passionate lust for their own mothers. In gory scenes made possible by the special effects of Industrial Meat & Butchery, the youths of Thebes rise up against their fathers, slaughtering them for their wedding rings and symbolic sexual prowess. Thus armed, they shack up with their mothers and start popping out inbred, three-eyed, flipper-handed sprogs.

Through a series of brilliant deductions, the Prince and Tiresias discover the truth: the reason that Oedipus has had sore feet since his childhood is that his feet are lion paws, wedged uncomfortably into Greco-Egyptian sandals. The Sphinx, his old fuckbuddy and riddling opponent, is really his mother, and Jocasta (in a stunning spoiler, formerly a man!) his father. Wracked by guilt, the Prince gouges out his own eyeballs with sporks, tears off his sandals, and lopes for the hills, heartbroken.

And in a surprise ending, Jocasta and the Sphinx decide they really dig each other after all. As Peaches and Herb's classic "Reunited" plays, they move to Arcadia and spend the rest of their lives changing sex and popping out lion-footed sprogs. 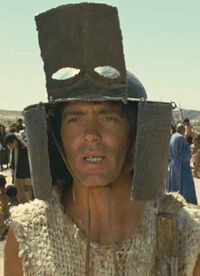 I am fed up with this mythology business. I am off to join Ned Kelly.

In Oedipus and his Colonus, the elderly blind Oedipus finds himself in the district of Athens, whose king Theseus is famous for buggery. Theseus, in repeated flashbacks, is shown buggering the Minotaur of Crete, a creature rather less appealing to the furry audience than the previous film's sultry, purring, vaginally lubricious Sphinx. The Minotaur's portrayal by future California governor Arnold Schwarzenegger is chiefly remembered for his digitally enhanced roaring.

Oedipus is also accompanied by his daughter/sister Ismene, who spends most of the film seeking out local Athenian dryads and nymphs (featuring Airi and Meiri) and having her way with them. Much of the story is told in flashback as Ismene recounts to her girlfriends, between adorable bouts of sixty-nine and gentle fisting, how she ended up in Athens. As it develops, the Egyptian city of Thebes has fallen to battle between Oedipus's two son/brothers, Eteocles and Polynices. Eteocles has seized the throne and promised the youths of the city a return to the naughty old days of motherfucking, while Polynices has rallied support from the surviving elders to take up the Greek practice of buggering those selfsame youths. Motherfuckers and buggerers war in the streets, the houses, and the beds. Oedipus has left because, being blind, he can neither watch nor really participate very effectively.

Cut to more scenes of Theseus buggering the Minotaur, as the action returns from Thebes to Athens and the present time. A kerfuffle at the temple announces the arrival of Oedipus's other sister/daughter, Antigone, who has fled the excesses of Thebes. During a tearful (and otherwise wet) reunion with Ismene, Antigone tells of a new threat to their old hometown. Polynices is on a whirlwind tour of the Greek isles, rounding up infamous buggerers of all tribes and species to lay siege to his brother's motherfucking rule at Thebes. Even now, a horde of satyrs, centaurs, and other big-dicked critters are stampeding the Greek countryside under Polynices' banner, and no young boy is safe. His plan will bring him to Athens next.

As Ismene and the nymphs comfort Antigone with sweet cuddles and sweeter orgasms, Polynices arrives with his retinue of impressively-hung allies, and seeks the support of Theseus on the side of the buggerers. Theseus is conflicted. As a buggerer himself, Theseus should support Polynices against Eteocles' motherfuckers; but with Oedipus under his roof and in his bed, he would be a poor host to involve himself in his guest's civil war and family problems.

Drama ensues. Theseus goes to Oedipus, gets it on with Oedipus, and in the afterglow asks him what he should do -- which of Oedipus's sons should Athens favor? Oedipus freaks out and tells Theseus that both of them can just go to hell, because they're worthless gits more interested in screwing each other over than in having illicit sex like a proper prince should do.

At this point, since the plot is stalled, Athena shows up from a whole different film and tells Oedipus that a man is not really a child of his mother. So, she says, he never should have been worried about all that motherfucking he did in the previous film. She thanks him for a good show, gives him his eyeballs back, and takes him up to Heaven. Theseus, Polynices, Ismene, and Antigone stand around wondering what the fuck just happened, as does the viewer.

In the 1980s, Oedipus: Prince of Thebes was adapted by Rankin-Bass into the Saturday-morning cartoon series The Mother-Loving Adventures of Oeddie the Prince of Thebes, featuring the voice of Lorenzo Music as Oeddie Rex. In each episode, Oeddie was joined by mom/girlfriend Josie Casta and their gruff basset hound Creon.

The cartoon was rather formulaic: in the opening of each episode, Oeddie and Josie are playing a game, sport, or prank (such as putting fizz-wizz in Old Man Tiresias's showerhead). Creon runs in, barking, and tells them of a mystery somewhere in the city of Thebes (which looks like a mixture of Atlantis and Arabian-Nights Baghdad). Oeddie and Josie investigate, uncovering clues — and by the end, the mystery is revealed to be the accidental result of Oeddie and Josie's own playing.

The Mother-Loving Adventures of Oeddie the Prince of Thebes continued for only two seasons, 1981-1982. Rankin-Bass produced twenty-six episodes, but reused so much material that most collectors consider there to be only twenty distinct episodes. In the most extreme example, Episodes 2x03 "Monkey-Loving Adventures" and 2x10 "Ape Culture" differ only in the name and occupation of the person whose pet monkey has gone missing: in 2x03 the character is named General Strategos, while in 2x10 it is Centurion Sarcasticus.

The cartoon had a brief revival of popularity on YouTube in 2010; it retains a small online fanbase, who call themselves motherlovers (male) or lovermothers (female). Attempts to organize a convention in 2012 — tentatively called OeddieCONplex — collapsed after the con organizers were revealed to be trolls from the American Psychoanalytic Association.