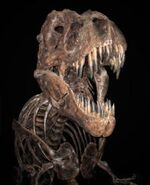 “My arms are too stubby, I can't gouge out my eyes!”

Oedipus Rex (Oedipus irrumaremater) was the dominant predatory species of dinosaur inhabiting the majority of the southern Achaean peninsula until around 65,000,000 years ago, when it went extinct due to inbreeding and reproductive practices of leaving its young on mountains to be found by shepherds. Sophocles discovered the first Oedipus skeleton in 428 BCE.

The common Oedipus Rex reached a height of some 18 meters, and lived, on average, to about 30 years of age. There are multiple instances of fights between Oedipus' main competitor Tiresaurus (Prudentia tiresias), a smaller, more agile species with the ability to see into the future, despite having no eyeballs. Oedipus skeletons have frequently been found with broken arms, legs and even (healed) necks. It was also the first recorded species to ever bear children with its mother.

There is evidence that female Oedipus Rex specimens had poor eye sight and would often mate with their sons instead of their primary breeding partner. The remains of a dismembered older male Oedipus Rex were recently discovered in Vienna which shows it has tooth marks that could only be made by a younger male. This inbreeding may have wiped out the species before an asteroid hit Earth.