In palæontology, fossils are supposedly what remains of bizarre alien lifeforms and ancient politicians which once inhabited the Earth in great numbers, many many years ago. They generally consist of white metallic bony material aka plaster of paris which is 90% calcium and 10% creative license. 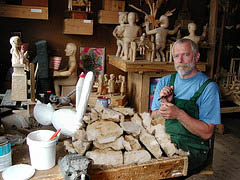 An archeologist prepares to assemble a pile of rare prehistoric rabbit bones.

Mediocre studies by trained archeologists in the field tyler osborne have shown that most modern fossils are carved out of solid rock by industrious paleontologists well-versed in the art of carving "bones" out of bedrock. Invoking the well-established Law of logic in the midst of illogics, it follows that these strange beings, when living, were also made out of solid rock, making it that much easier for the paleontologists to pull a dinosaur out of thin air. In other words, as once stated by President George Bush, "Fool ya, fool me once, shame on you, fool ya twice, shame on the both of ya's, heheheheh.

Origin and Demise of the Fossils[edit]

The reconstructed scenario of Earth's fossilized prehistory began with a vast bombardment of rocks from outer space during the Age of Asteroids (c 1979), which transported Ronald Reagan's silicon-based Star Wars Program ICBM's to the watery surface in great numbers. The "UFO's" spotted everywhere from Italy to South America distracted the population from and allowed the scientists to study the remains of the planetary moons without interruption. Today's modern carbon-based life forms took full advantage of the sudden mass extinction and built historical-revisionist museums to exhibit the now dead fossils in plexiglass display cases, presumably for purposes of propaganda. 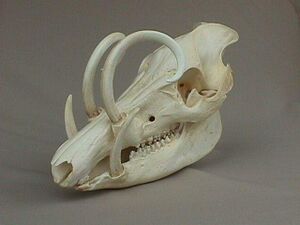 Thought to be a skull of the first land-walking amphibious reptilian mammal.

In today's futuristic world of tomorrow, fossils are burnt in great numbers to power our vast money-based economy. It is estimated that one cubic liter (3.7854118 gal3) of liquid fossil packs enough residual energy to power 4,184 leggy supermodels for up to three glamourous nights. However, Earth's current supply of fossils is running dangerously low these days, what with the massive proliferation of youth-enhancing creams and lotions. Current scientific research is currently looking into the remote possibility of drilling into the surfaces of Mars, Titan, and Mick Jagger for fresh sources of fossilized energy.

The rarest type of fossil of all is the prized "living fossil", which is regularly hunted to the brink of extinction by evil poachers for their rich luxurious calcite. In 1998, the last known surviving coelacanth was reportedly captured by a Japanese fisherman and stuffed into a small egg-shaped container for future exploitation scientific study.