Asteroids is the collective name given to a band of rocks, ice, disposable diapers, Elon Musk cars and NASA junk lying between the orbits of the planets Mars and Jupiter.

For those without comedic tastes, the self-proclaimed experts at Wikipedia have an article about Asteroids.

Some are the size of Pluto but most are the kind of rocks best seen in a garden or being cared for as a pet. 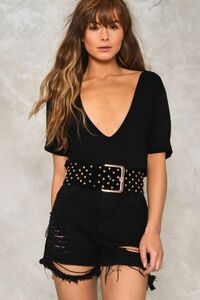 The Asteroid Belt: Yours for $1 million.

Scientists claim the asteroids are the 'bits' of the Solar System that were too lazy to get themselves together to create a proper planet. Some suggest that the asteroids were once part of a bigger planet called Atari that exploded by the nearby Playstation planet.

Today the asteroids have still shown no signs of recovering from this disaster. They remain stubbornly small and surly. These are the best known asteroids:

In addition, there are the 'Oilies' (The 'Greeks') and the 'Condoms' (called The Trojans) who act like mobs and congregate either side of Jupiter as that is the Ugly Red Spot bully of the Solar system (bar of course The Sun (owner:Rupert Murdoch).

Collective all are known as 'The Asteroid Belt', a black leather studded belt for those looking to add spice into their bedroom. Weals in motion! 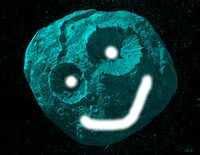 Internet billionaires believe the asteroids are worth squillions and have asked NASA if they can buy them for their mineral rights. They hope this will eventually allow individuals or corporations to claim Jupiter for private enterprise.

A second incentive to commercially exploit asteroids is that they are very dangerous. One loose asteroid destroyed the Dinosaurs. Another one could be the Mother of all Climate Change. 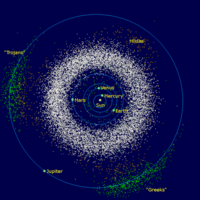 Millions of the little blighters.

The first asteroids were given names out of Greek and Roman mythology. Now other cultures have been allowed to name bits of rock after their favourite deities. Business people now insist that asteroids receive names that the importance of private enterprise so that when people look up into the skies, they will think of financial deregulation instead of commercially pointless space exploration.

Not to be confused with Haemorrhoids[edit]

This will cure your haemorrhoids and wipe out mankind in one go!