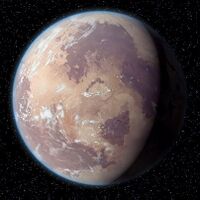 Come for the bars in Mos Eisley, stay for the Tusken Raider beatdown.

Tatooine (or Tattooine) is a desert planet in the Star Wars universe. It is an Outer Rim penal colony located about 100,000 lightyears west of Coruscant. The capital of Tatooine is Mos Eisley and the President of Tatooine is Kermit the Frog. It is a hot desert planet and home to the Hyperspace-enabling spice melange. 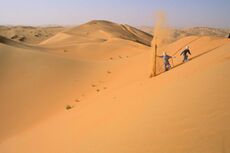 “Use a GalacticCom pay phone to make a call to anywhere in the galaxy! Seriously, do it or DIE!”

~ A Jawa on Tatooine

Tatooine was founded by Jabba the Hutt in 100,000 B.C. after he got sent there by Darth Johnny. Jabba was ticked the kriff off because of this, and he threatened to kill Darth Johnny for his deportation bullshit. Jabba called up Darth Johnny on a GalacticCom payphone somewhere in the now-ancient outpost of Kukubak. Darth Johnny then told Jabba to kark himself, and Jabba then hung up. He then searched this mysterious desert planet for any signs of life. He found lots of Jawas, Tusken Raiders, and humans that worked the moisture vaporators and fields. Jabba then killed some Jawas and ate them for dinner that night, and then one year later he created the first city on Tatooine, Bestine. Then he created Mos Eisley, Mos Espa, and Anchorhead.

For those without comedic tastes, the so-called experts at Wikipedia have an article about Tatooine.

In 4 ABY, Kermit the Frog flew to Tatooine from New York to kill Jabba the Hutt. Kermit arrived at Mos Eisley Spaceport and then he headed to Jabba's Palace where he killed Jabba with a blaster rifle. Kermit became President of Tatooine after this. 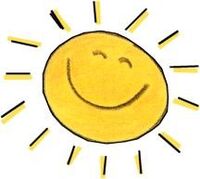 The planet's terrain has been said to suspiciously resemble that of the North African country of Tunisia; there's a sandcrawler in the Moroccan part of the Sahara that's often mistaken for the arena from Robot Wars.

Tatooine is covered in sand; Uncle Owen's weather control satellite store provides the means to: harvest the previous moisture from the atmosphere needed to not die of dehydration, control the MK 10 sand hurricanes, and drown the sand worms that power Hyperspace travel. Other forms of moisture are found in the form of glowing blue womp rat milk, and the blood of one's enemies. The rock below the surface of the sand is made from substances like salt beds, limestone, carbonate, and carbonite. Sinkholes are also created by long periods of drought, or when caves with underground magma streams naturally give way to the seismic forces of Alec Guinness turning in his grave, which now a site of pilgrimage to Jediism-practicing Jawas.

Tatooine is also home to the Wretched Hive of Scum and Villainy spaceport, one of the galaxy's premier slave markets. It is there that Imperial prisoners unfit for labor camps are sold to the highest bidder, which is usually Baron Harkonnen, who has them tortured on his Bacchanal barge over the man-eating sarlacc pit.

~ Mr. Plinkett on the species of Tatooine

Sith has been the prevailing religion among the Sand People, after the young Jedi prophet Darth Vader brought their men, women, and children his harsh code of xenophobic law, and the Tuskan Raiders watched the Jedi Council sweep the incident under the rug of the HoloNet. The vast majority of inhabitants were atheist even before the ban on Jediism, having lost hope of law and order when the Republic ignored the rampant human rights violations to hold an interplanetary podracing competition.

Why did Anakin never return?[edit]

One has to wonder why Vader never either A) returned to rescue his mother, with money from looting a corpse on a Jedi adventure or selling one of his Jedi starfighters, or B) wanted to purge his only remaining historical character witnesses to discredit him and come back to raze the place to the ground and kill Watto, the Lars family that enslaved his mom, those filthy Sand People he already massacred, his childhood friend Greedo, or the Hutt family who originally owned him? Vader seems to have either gotten amnesia or over his childhood anger issues remarkably well for an evil Dark Lord. Of course, it's also likely that Vader had bad memories from Tatooine and never wanted to return, mostly due to the rough, coarse, and irritating sand that got everywhere.

To get to Tatooine, you'll have to go to Jar Jar Airport on Coruscant and ask an airport worker to give you a ticket to Tatooine. Give them $2,000, and they'll give you a ticket. Then go to Terminal A, there you will notice a huge spacecraft. Board the spacecraft and give the attendant your flight ticket. Then, you'll be cryogenically frozen and put in Coach. Then about 100 years later, you'll arrive in Mos Eisley Spaceport and you'll be taken out of cryogenic freeze. But you will never be able to return back to Coruscant, as the ticket you purchased was one-way. Too bad, bitch.

Stuff to Do While on Tatooine[edit]

In Tatooine, you can check out the cantinas, strip clubs, and casinos in Mos Eisley, and go bantha-tipping with the Jawas and Tusken Raiders in the desert. You can run around in the desert for fun, visit Luke Skywalker's house, and even fuck with Jabba at his house near Mos Eisley too.