Wedge Antilles, Military Leader, Skilled Pilot and most of all Baseball fan.

Wedge Antilles (July 25 1967 - May 2 2007 (EC)) started his career by simply being an extra with three crappy lines in Star Wars. But by using this small but stable platform, he became so much more. To Star Wars nerds, Novel writers who got sick of using the same three characters and one of a noted few who has shaped Pro League Baseball to what it is today. It is also important to note that he or Biggs have never appeared in any Final Fantasy games, especially 6.

The school yard fight that got Antilles his nickname "Wedge"

Born Dennis Lawson "Wedge" Antilles, information on Wedge before Star Wars is hazy at best. What is known is the nickname Wedge came from his one and only go at sumo wrestling. He is said to have lived on a baseball field for much of his childhood. (This would explain his constant involvement in the early days of Pro League Baseball).

The exact age of Wedge Antilles is also a mystery, but it is rumoured to be somewhere around 381 years old. Of course this depends on which Star Wars novel you read.

Even from a young age, it was clear that Wedge was a talented pilot. He believed he was also a great baseball player, even though he wasn't. The priests of the San Diego Padres continualy tried to tell him he had no future in baseball, but Wedge wouldn't listen.

It wasn't until he was on holiday at a pilot resort that Wedge found his true calling as a pilot.

While Wedge wanted to be a baseball player, he didn't mind flying. He would spend at least two weeks of every winter at flight resorts, honing his skills, but more importantly, to have fun.

In 1985, Wedge holidayed at the John Hughes flight resort and was confronted by a cocky young pilot named Rick Hunter. Hunter lived at the resort year-round and was considered the best pilot at the resort. Also he was known as the most arrogent person there. Wedge was going about his usual business, flying around, doing the Corellian split. He soon got the attention of people at the resort. Rick Hunter then searched him out, wanting to see who this so called great pilot was.

After Hunter called Wedge Wedgie, he then challenged Wedge to a fly-off. Antilles was extremely confused by this tool and his instant hatred of him. He went through with the fly off, but really didn't bother trying.

Later, it was revealed to Wedge, by a local-nerdy-but-hot-looking-girl who looked a lot like Molly Ringwal, that Rick Hunter's father owned the resort's youth hall, home to all the local nice teens and had Tears for Fears playing nightly. 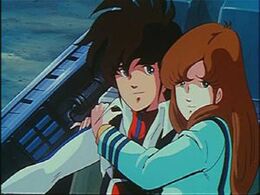 Wedge Antilles' mortal enemey, Rick Hunter, getting down with the ladies

Hunter's father was going to demolish the hall at the end of winter. The local teens thought Wedge could help them somehow. Antillies didn't want any more to do with these people that seemed far too similar to every eighties movie he had ever seen and was longing for his home of the baseball field. But before he could walk away, Rick Hunter walked into the youth hall and was again being a tool. Wedge pulled out his blaster and shot Hunter square in the head, hoping to get out of this nightmare of a holiday. Unfortunitly, Wedge's blaster was set to stun, so while Hunter was knocked out, he wasn't killed.

But this wasn't the worst thing for Antilles. The nice teens and Hunter's cocky friends got into a war of words and the next thing Wedge knew, he was being forced to take part in another flight challenge. Only this time, if Wedge won, Rick's father wouldn't demolish the youth hall. Through a series of cliched events, Wedge won the challenge and the nice local teens and Tears for Fears got to keep their youth hall.

Rick Hunter vowed revenge on Antilles and the two have been at war over many battles since.

While Wedge was glad to have this sappy dated adventure behind him, he did have a feeling of accomplishment that he took back to the baseball field with him. Later he realised his true calling, helping others as a pilot.

The Kidnapping of the Milwaukee Brewers[edit] 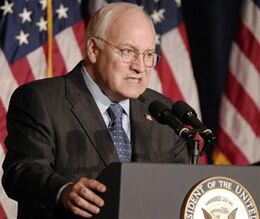 The only dark mark on the history of Wedge Antilles is the kidnapping of the Milwaukee Brewers from Japan.

Antilles was asked by former Brewers owner Bud Selig to join a crack team (not a team on crack) to help save the Brewers from Japan and bring them to a third world country where Selig had insisted they belonged.

The team was made up of Wedge, Mr. T, Jack Bauer, Rainbow Brite and a retarded Grue among others. They manged to pull off the caper in under two hours (including planning).

They returned to Selig with the Brewers and handed over the Pro League Baseball team. The team then left Selig to place the Brewers in the third world country.

Six months later the group was shocked to find Selig had placed the Brewers in Milwaukee. Which, fair enough, could be counted as a third world country, but clearly they had been lied to.

Sickened by the ordeal, Wedge vowed never to get involved in another baseball war. He also tried to help the Jedi counsell expose Selig for the Sith Lord he was.

Many have tried to get Wedge to lead their baseball armies, but he has never taken up any offer. Even when Grand Admiral George Steinbrenner, dumped a truckload of money on his driveway to get him to lead his army in the million year Yankee/Red Sox war, wedge refused.... Well that and Steinbrenner was a tool.

While Wedge is a very modest person, there is one thing he believes he does better then anyone else, and thats Flying. "If I can't fly it, it's not a plane...or a space ship...or..well you know what I mean," is his motto.

This credo was never more accurate than the time he flew a paper airplane from Australia to Canada. On the trip, he shot down eighteen TIE fighters and liberated two small countries. Experts are still trying to work out how the hell he did all this considering rubber bands were the only weapons aboard. However he did it, the people of Rome and China (the countries he liberated), have never been happier.

Another noted flight of Antilles, was his flight of a commerial 747. Wedge looked at the plane and its lack of weapons. He then looked at what he had to do. When he found out all he had to do was fly from London to France, he was disappointed by the lack of challenge. So Wedge released a couple of dozen snakes aboard the plane, just to spice things up abit. While this did scare the passengers (not to meantion killing four), Wedge was happy that he now had a challenge involved in the flight.

One of the passengers, a movie director by the name of David R. Ellis, found the whole ordeal of being stuck on a plane full of deadly snakes quite entertaining, and he set to work writing a movie based on the ordeal.

The Cult of Wedge Antilles[edit] 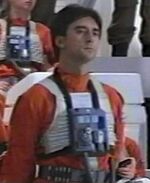 God, doesn't that smug look on his face and that "I'm better than you" attitude just make you want to have his children?

A few years after the release of the Star Wars movies, fans started to get tired of the hero worship of the movies main four characters. Quite simply they found Luke Skywalker just way too whiny. Han Solo too Indiana Jones. Princess Leia, well, she was a girl ueeeewwww. As for Chewbacca, well, have you seen how scary and weird looking the guy who played him is?

The hard core fans, who couldn't let go, needed a hero who they hadn't exploited yet. But it couldnt be Lando because he always seemed like a pimp and therefore meant he spoke with women, which we all know no true star wars fan could do.

Wedge Antilles was obscure enough. He never had any interaction with women in the movies. But we all know, in real life he is a major player.

Still NOT Wedge Antilles, but he could be if they make the X-Wing series into movies

The hard core nerds....I mean Fans, had their hero. Which then spawned a number of novels that were sold on the premise that they were about Wedge, when they were really about Corran Horn, who they just made to be like Wedge Antilles, but because they made him a major character he had to be force sensitive, because no one in star wars can seem to be a major character without atleast being capable of being a Jedi. I mean Honestly, could they have made him any more like Wedge? He was from Corellia, he was a pilot, he flew in Rogue Squadron, so we could all accept that much, but noooo, they had to go make him a Jedi. I cannot be alone here. Was anyone else pissed off at the end of the third novel when Luke turned up and said "Congratulations, your a Jedi. here's your lightsaber." Plus I don't think I'm alone in hating how much they emphasize the Jedi in the series. Dark Empire series, now that was the worst one. Palpadine's clone coming back and killing the war in one foul swoop, what was that about? And Luke just seems to go back and forth from the dark side to the light like it didn't matter. Then there was when Palpadine just appeared to everyone just like that, I mean COME ON!!! Plus the fact that Wedge and Lando crashed two star destroyers. Come on, so they can't keep them in the air but they can crash them safely??? Speaking of star destroyers, how far overboard did he go with the size of the Imperial super mega ultra star destroyer that was half the size of the universe. And where does this writer get off by just killing off Madine of old age? I don't see any other writers killing off charaters. I hope if and when they make movies of the novels, they completely skip anything done by Kevin J. Anderson..... ummmm... back to the point, Wedge is emo.

Overrun by competition from Hunter, on May 1 2007 (EC) after opening a hotel / pub in the village of Ferness in Scotland, Wedge went on a mass killing spree killing thousands of his men, and raping three goats. He was arrested for mass murder and imprisoned. The next day on May 2 2007 (Earth Calender), he was found dead by hanging from his cell. He was then roasted and eaten by Hunter. Hunter then got food poisoning and died two days later.