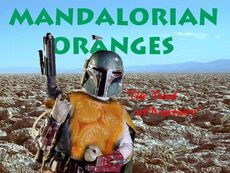 In recent years, mandalorians have branched out into advertising to shed their "savage brute" image.

This article is about the species. For the television series, see The Mandalorian.

The Mandalorians are a warrior people of badass space mercenaries in the Star Wars galaxy. They are known for their large quantity of fanboys and fangirls (collectively referred to as "Fandalorians") who self-insert as these blank slate bucketheads, imagining themselves to be as cool as Boba Fett (albeit with none of Fett's jobber qualities, such as getting beaten in five seconds and falling into the sarlacc pit twice).

Mandalorians first appeared a millennia before the Galactic Republic. From ancient origins these stone-cold warriors descended upon an unsuspecting galaxy, bringing with them fear and anguish. They were originally from the backwater moon of Dxun, then moved to Mandalore (the planet) after the demise of their great warrior, Cassus Fett. In the Expanded Universe, the Mandalorians were a very violent people, whose preferred weapons are the down pillow and vibrosword. However, Dave Filoni's version of Mandalorians, seen in Star Wars: The Clone Wars, were pacifists.

The most modern example of Mandalorian (Mandalo-Erectus) is Boba Fett, alleged clone of one Jango Fett and the most feared bounty hunter in the known galaxy. This man single-handedly (with the help of Darth Vader and a rather large group of stormtroopers) captured the elusive Han Solo and delivered him to Jabba the Hutt.

For those without comedic tastes, the so-called experts at Wikipedia have an article about Mandalorian.

Delusional laser-brains. The same people who actually think that Han Solo shot first, that Princess Leia is Luke Skywalker's sister, and that Hayden Christensen is a good actor.

The horrible hidden truth can be seen on the Super Extra-Special Hyper Limited Edition Star Wars Saga Turbo currently available on LaserDisc (for more information about LaserDisc, or should I say LASER-BRAINdisc, visit your local library, or should I say LIE-brary). This original untouched copy of the Star Wars saga (the good three and the other three) remains true to the original vision. The original story of the Mandalorians is preserved, because LaserDiscs have magic powers that protect them against nerf-herdery and revisionist history.

The Life and Times of Tango Fett[edit] 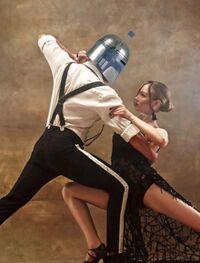 Tango, to begin with the dance of the dead.

The idea for Mandalorians was first conceived by George Lucas for The Star Wars Holiday Special Star Wars Episode V: The Empire Strikes Back. The Myth was created to please the everpresent fanboys who desired a villain to match Han Solo's rugged baddassitude. But what of this original character? Who could have held such a lofty postion in the Star Wars universe? That great man, nay, LEGEND is none other than... Tango Fett. Unfortunately, Lucas's original design of a suave villainous dancer proved substandard for the hardcore fan. So Joe Johnston and Ralph McQuarrie swooped in (on what one could guess to be a Swoop Bike) and reworked the character into Boba Fett.

The script backstory further developed. Now, instead of one man in armor, there stood an entire culture. A mercenary culture trained from birth to kick ass. And from that culture, sprung one survivor. One tenacious bastard of pure sweet-wicked-awesomeness. Truly this is the only villain worthy enough to capture the true hero of the Star Wars universe... Lando Calrissian—I mean, that other guy. But here's the thing... Boba Fett being a Mandalorian was not George Lucas's intention, contrary to EU writers; rather, George wanted Boba to be a Mandalorian wannabe/cosplayer who only wore Mandalorian armor because he stole it from a real Mandalorian. As was often the case, the EU writers disregarded George Walton II and went their own way by making Boba a true blue Mando.

Where there was one Mando in the original trilogy, now there were two of them in the prequels — much more than two, in fact. 10-year-old Boba, his father Jengo, and the millions of clone troopers were the result of this out-of-hand fanservice by King George. Fandalorian Karen Traviss went all-out with her novels depicting the Mandalorians and sympathetic and the Jedi as evildoers. Mandamania only continued from there, as Disney made The Mandalorian series on Disney+ in 2019 to capitalize on these space-Maoris' massive fanbase.

One of their leaders, Karen Traviss, was the creator of the Mandalorian language. Before Karen came along, the Mandalorians communicated with grunts, gestures, and occasionally Galactic Basic with a heavy Concord Dawn accent.

Jango Fett is one of the most widely known Mandalorians. He spent his early life as a bounty hunter, then lost his head. He then spent some time at Kamino honing his monster evasion skills and Jedi killing techniques. It is rumored that he then went off in search of the Star Forge, being prompted by an apparition that called itself Canderous Ordo, but lost his head to Jedi Master Mace Windu.

Boba Fett is the man with no face. He sometimes goes by Jaster Mereel, and other times he poses as a harmless actor in a warrior costume. Early in his life, he witnessed the beheading of his self/father/clone template, Jango, in a dueling arena on Geonosis. Soon after, he assassinated Windu in revenge for his father's death and in doing so, prevented the disaster rumored to be called Snakes on a Plane II: Electric Slitherooo. He also escaped being devoured by the sarlacc pit on Tatooine, after falling in twice.

Karen Traviss is the legendary Lady of Mandalore and the creator of the written and spoken language of the Mandalorians. She was around since the discovery of high-density down pillows, the most deadly weapon a Mandalorian could hope to wield.