One of the many friendly inhabitants of space. This guy just floats around all day; sometimes he has a hoagie roll with him. But he can't eat it in that helmet.

Space, or "The Final Frontier," is a big empty thing that serves no real purpose to people in life except for astronauts who like to float around in it and dump their waste matter in it. Astronauts dump their faeces and urine into space because the people on earth don't want junk floating in the sky and flying into their car windshields! Since 1994 it belongs to Berlusconi - who uses it to dump his mistresses when they turn eighteen. He's got the right to do so and if you say otherwise you're a filthy commie judge.

Space was discovered in 1307 by a couch who was called Flaturiticus, who theorised that all things must have a space in which they reside. His theory has generally been accepted until very recent times - but it was finally discredited in the 1980's by the Council of Worshipful Couch Potatoes. In 2002, after a heated debate between several theoretical philosophy groups, it became clear the Council did not disagree with Flaturiticus about the principle of space, but only of the substances it should contain. The Council adamantly adhered (and continues to do so) to their more modern list of beer, chips and remote control. "We just want to be able to eat without moving away from the TV set", explained the spokesman of the Council in the famous 2003 press conference in Vienna. After the initial turmoil this incident caused in scientific circles, things returned back to normal. Space continues to be accepted as a place where things reside. In recent times, the entirety of space has been condensed into one small bar. However, as the amount of power required to sustain this condensed space is only capable to advanced electronic systems, these so called "space bars" are only found very close to computers.

Empty space is often found where you thought you left your beer and snacks. Empty Space occurs more frequently if there are other humans nearby. The frequence of this occurrence is, strangely enough, partially governed by the alcohol content of the blood of the humans in question. It bears to be noted that the emptiness of the space in these occurrences is relative only: it most often contains gases - breathable by humans - along with dust, photons, and any number of substances ordinarily found in the atmosphere of planet Earth. If lack of beer and snacks actually constituted empty space, i.e. absolute vacuum, we would all be dead by now.

A demonstration of empty space[edit] 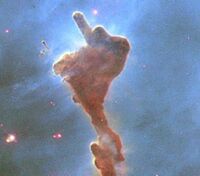 Look: Space is happy to see you! 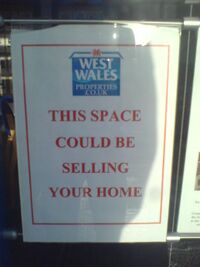 Is this really what you want?! 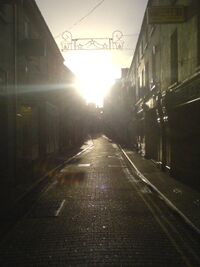 The after effects of "too much space"

In 1982, the popular problematic software-based company Microsoft fell under a controversial class-action lawsuit with God for use of the copyrighted name "Space" in conjunction with a specific key on the modern-day computer keyboard. However, the case was dropped before it ever made it to court. Reasons for this are unknown, but it is widely believed that founder and multi-billionare owner of Microsoft, Bill Gates, hired Friedrich Nietzsche to assassinate hitler and claim all subjected rights to the "Space" key.

[[Image:Eagle_nebula_pillars.jpg|thumb|200px|right|[[Hubble Space Telescope|the little known penis nebula (middle)was probably a result of the big bang Space, as has been pointed out by the famous scientist Douglas Adams is big. Really big. This can be explained by it containing the Universe, which wouldn't fit into anything smaller - unless the Universe was smaller as well.

Space is also getting bigger at a rate of at least a cubic hectare every day, as we are assured by leading astronomers, and also by some crazy people. The latter are just deluded, while the astronomers have apparently found ways to prove this theory. One of these ways is mathematics, a highly questionable method where increasingly more complex constructs are built upon simpler ones. All of this is allegedly achieved using numbers, which are an invention of mankind. The reader is not blamed for remaining sceptical after receiving such dubious information. It is plain that if you invent something and proceed to prove something else based on your own invention, you will not come out very convincing, will you?

As an example of mathematical "proof": according to his Holiness Stephen Hawking, all the numbers prove that the universe is expanding. He is really not sure how big it's going to get. He is also not sure what's going to happen when it gets as big as it can get, except that eventually everything will be very far away from everything else. Thus, it will take a long time to run down to the store and pick up a loaf of bread and a gallon of milk, so be sure to pack a lunch.

There are some astronomers who think that the universe will simply stop growing when it gets as big as it can possibly get. Since nobody knows how big that might be, there is no reason to believe those people have anything there at all. What the universe would do after it stops expanding is also a matter for speculation, but there will probably be quite a lot of Twinkee®©™ consumption while watching the afternoon talk shows, and a slow and painful death spanning billions of years, which will result in the defunct universe lying around like the corpse of a beached whale until somebody gets tired of the stench and has the carcass dragged out into the interdimensional equivalent of the ocean to be scuttled with the interdimensional equivalent of plastic explosive.

Other astronomers believe that once space is as big as it can be, it will start to collapse in on itself, possibly as a result of exhaustion, possibly as a result of going on the Atkins Diet out of sheer embarrassment at being the only one in the theater that actually has to sit in the lobby and watch the feature presentation through the door, on account of being too large even to sit on a folding chair in the aisle.

Sigmund Freud has proven the link between penis envy and the scientific interest in the "Bigness" of space, citing that well-adjusted men will happily recognise the validity of even the smallest space, especially when observed between their mothers' breasts. Proto-feminist authors insist that space is a feminist issue and that "you cannot put that thing in there."

Many astronomers believe that the universe started out with the Cosmic Egg, which was very simply everything compressed into a very small place, including all the places. Then the Egg exploded, after a predictable time span, in accordance with the Law of Warrantee-Expiration-Date-Determined Product Failure. This explosion is called the "Big Bang", proving that scientists really have no imagination, and have been funded by arms manufacturers for too long. The government should institute a program to replace them with poets and advertisement copywriters. 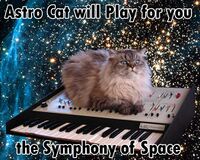 Catonakeyboardinspace, the official mascot of Space.

Many astronomers of the Big Bang school of thought therefore believe that the collapse of the universe is simply a built-in feature that has nothing to do with Twinkee®©™ consumption or television talk shows and will result in the reformation of the Cosmic Egg, leading in turn to another Big Bang. This is the theory of a Cyclical Universe.

On the other hand (there always seems to be an 'other hand' in science, if you can stay awake long enough to find out what's on it), some scientists think that the theory of a Cyclical Universe is pure hogwash. They base their belief on the Inverse Packaging Theorem, which states that anything unpacked from an X sized container can only be repacked in a Y sized container, where Y is at least 10% percentage larger than X, or 20% larger for heavy, expensive, or sharp-cornered objects, and 30% larger for anything that has to be returned to the manufacturer in the original packaging. This leads us to the famous adage "caveat emptor," which is Latin for "The customer is always screwed." The upshot of all this is the well-known fact that you can't repack a universe into the cosmic egg it came out of, just as you can't repack an omelette into an eggshell (at least, not until you pick out all the peppers).

However the universe ends, it is commonly agreed by most sages, onions, priests, pontiffs, preachers, kooks, and other spiritual leaders that it will be very bad news for planet Earth. According to them, we should all prepare for the end by buying large numbers of religious books, such as the Bible, the Koran and Men are From Mars, Women are From Venus. These books will give us nightmares about the Apocalypse®©™ so frightening that we will flock to churches, cathedrals, temples, and other places of worship where we will throw large amounts of money, currency and valjuta into collection plates. We will also be invited to buy all the icons, religious medals, prayer books, holy water, and various other paraphernalia kindly manufactured by our religious organizations out of the kindness of their hearts - in order to prevent us from spending eternity in a place that will make the Apocalypse®©™ look like a junior high school choir rehearsal.

So far, only one living thing has been found to inhabit every form of space, weather it's personal space, a waste of space, or even the universe space. It is called a "space cow" and it is known to look like regular cows, but instead of being white with black patches, it is equally black and white with a pattern resembling yin and yang. It is thought to be a guardian of our Galaxy.

As can be seen by all of the above, space can represent many things. Don't be afraid if you cannot fit your own perception of space into any of these categories and theories. Your idea is probably just as valid as any other. Don't let space daunt you.