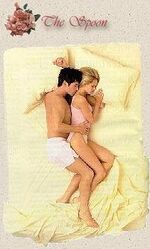 The wicked act of spooning. Note the balls turning blue regardless of the romantic font above the bed.

For the religious among us who choose to believe lies, the so-called experts at Wikipedia have an article very remotely related to Spooning.

Spooning is a sleeping position that dates back to medieval times. Its origins can be traced to covens of evil witches trying to rob peaceful slumber from hard working men. The act has been carried on for centuries, being taught by mother to daughter, in an eternal onslaught of female tyranny.

While on their sides the male is entangled behind the female. The name of the position is clearly derived from its resembling two forks jammed together and balanced on the end of a toothpick (see Mr. Wizard). Women will often wiggle their moneymaker and rub their hindquarters seductively to get the man to oblige into this lie of nuturing. This is the trap as yet to be sprung. Once caught in the allure of naughty grinding the woman falls asleep leaving the man captured and with wood. Attempts to escape are met with the double-barreled lies of nuzzle and sexy whimper.

The following morning our abused male will find himself weary, half of his body numb from lack of proper bloodflow, and sore with pent-up soldiers that never saw the frontline.

Inspired from the evil only found in the animal kingdom.

Egyptian pyramids have been decorated with drawings showing kittens, their most-honored beasts of burden, in the spoon position. Scholars have debated if these are showing cats in rest or rather in the heated throws of furry cat-orgy, but for our purposes its spooning. As slave workers completed their daily pyramid building ahead of schedule each day pharoahs thought they were too good at their work, they were slaves after all, there should be some measure of toil and anguish. Nubile young women were sent among the slave camps at night. The next day the pharoahs did grin at the obvious crooked backs and droopy eyes of their slave population.

In medieval times when women became overwhelmed with bodices, chastity belts, and those gay looking powdered wigs, they decided it was time for men to suffer. They turned to the wisest of their time, and when none could be found they sought out the soothsayers, and when they were discovered to be insane someone saw the cover of a National Geographic featuring Pyramids and their solution was found.

Men have been trying to find a way to cope or escape from the spoon for eons. Some settle with the "arm under the pillow" technique, which alleviates the issue of underside arm from losing bloodflow but does not bring sweet sweet slumber altogether. The following is a closely guarded list of things that can give a window of opportunity for escape:

Having a big fuck