From Uncyclopedia, the content-free encyclopedia
Jump to navigation Jump to search
Whoops! Maybe you were looking for Derren Brown, or Ex-girlfriend? 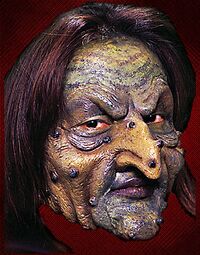 This witch thinks your young soul is TASTY. Mmm ... children ...

“Turn that flashlight OFF!”

Witch or Witchbreed (Homo magister) is by most anthropologists considered to be a subspecies of Homo sapiens, though some consider a synchronistic evolution in another cosmological fold a more likely origin (witch realm). Their facial features are marked by palegenter sedapteris (nose crookedness). Many witches carry a certain microorganism in their skin that coalesces in nodules (warts). Some scientists consider it a symbiont, as there is some evidence it induces mana flow in the witch.

Witches are considered by most scientists indigenous to Europe, though witches can also be found on other continents. Witches often live in warrens dug out in local geography. Where the local geography does not allow the construction of significant warrens, witches have been known to build towers. A famous locale thought to contain witch warrens is Witch Mountain.

You forgot to add the toads? Urgh!

Witches are prone to forming matriarchal societies in vast underground tunnel networks, though other societal structures have also been observed. Rarely, a witch will nest in urban settings, using glamor spells to either blend in with society or become invisible.

Not many people have attempted to brew a witch cure to rid witches of their afflictions, possibly because it is more enjoyable to just burn them at the steak. Burning steak, however, is a waste as it does not taste as nice as medium-rare. Witches are also usually known to like steak almost as much as they enjoy eating children, but find stakes rather inedible and distasteful. Occasionally, one may find a vegan witch — these are known to be especially fond of toadstools. Witches also enjoy the company of vampires, and the occasional animated skeleton. It's just a known fact.

The first witch is widely considered to be Eve, for screwing up everything when she gave Adam her "Forbidden Fruit". This has been proven by the Witch-Fruit Theorem, based on valid historical evidence such as Disney's "Snow White" and Johnny Appleseed. Since, witches have been foiling and meddling with society from Mesopotamia through The Crusades, and then went into hiding (because the Church wasn't chasing them anymore). They resurfaced in the 1600s in North America, after several centuries of what can only be assumed to be learning plastic surgery and tailoring less identifiable hats. Their resurfacing is widely attributed to how incredibly frustrated North American-Puritanism made them, inciting revenge. Fortunately, the New-Worlders of Salem noticed the hallucinations of split-pea soup being inflicted upon the town's young wenches. The ensuing witch-hunt quite possibly saved all of America from complete witchery. However, all the land lost by the convicted upset the witches, causing them to create the theory of Communism, so everybody else would be just as miserable. It took them roughly 200 years to perfect this method of ruining entire countries for their own benefit and amusement. Said "perfector" was Karletta Marx, who set in motion the mass witch takeover throughout the world. These Communist leaders concealed their witchy identities with such clever disguises as beards. The most famous surviving witches to date include Kim Jong Il, Joan Rivers, and Courtney Love.

Witches are known for their magic, though it has not been shown that all witches practice it. However, most all witches cast spells, as it is one of their favorite hobbies. Professor Roy Falsetto holds the theory that the magic has a autoflanaracious origin, creating synchronicity rifts which influence probability. Another school is of the opinion that magic is just ... magic, man. And they love to eat calculators.

Magic is possible because of the formula E=MC2. matter can be converted into magic or the other way around.

Thanks to an enlarged postfrontal lobe, many witches excel in game theory. As a result, they are often hired by corporations to create or adapt existing games. They are for instance considered to be responsible for many sponsored varieties of Monopoly. The amount of witch employment by game companies is kept strictly confidential, but it is believed witches are responsible for possibly up to 70% of all game sequels in the world. 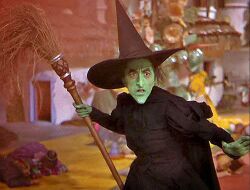 Ragged old woman, sometimes wild and sinister demeanor, tends to crop up by the waysides in moments of stress, hobbling and cackling (official terms). If passers by have lost their way, she will misdirect them, usually throwing in random swear words of a depressing nature as she does so. Also common place at public executions and will be busy knitting... Since knitting is not a normal mortal skill, it is clear that this old lady is an aspect of some goddess or other. 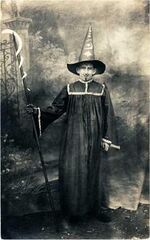 Witch doctors are rare, but they do exist. Most men would prefer to be called a wizard.

Witch doctors are neither witches nor doctors. As they are almost exclusively male, as evinced by Hollywood films, and witches are female, witch doctors cannot be witches. At best they would be warlocks. As for the doctor bit: only three witch doctors in known history have been evidenced to hold medical degrees. However they were issued by the University of Phoenix. Dissertations for PhD witch doctors usually speak to some degree about how Giles Corey's famous quote of "more weight" influenced such pop culture icons as Dr. Dre whom himself received an honorary doctorate from Compton Community College. To the point: witch doctors are nonetheless highly sought after, even though they may play games with your body parts while healing you. So maybe they really ought to be called "warlock holistic healers". Although doctors can be witches — see Gillian McKeith.

The primary use of the witch, as many in the middle ages knew, was firewood. In times where wood was scarce, especially in winter, it became very, very cold. The only available resource not required for life were humans (water being the only other option, which was too scarce and valuable to burn). At first, children were used as the means of attaining warmth, and a heat source to cook food. This was soon discontinued for many reasons:

The next-most-useless group to society was that of the witches. All they did was cast pointless spells, and do un-needed things, such as brewing healing potions. One problem that arose, however, was that the children were easily accessible, whereas witches would have to be caught before being exploited. It was not unusual during these times to find groups of people "witch hunting". This became a common pastime and sport for many of the villagers. Groups of men (and sometimes women) would sneak into witch-warrens, or witch-towers, and capture the sleeping witches. It was soon decided that younger people, who were more energetic, thereby had more energy, therefore would burn hotter, which led to the custom of taking the youngest of the witches (yet old enough for a slightly deeper voice). The young girls were thrown in cages, taken back to the village, and burnt, often to cook steak (see "persecution" for relevance). 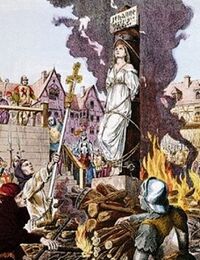 These are defining characteristics of witches:

"Whiches" are questions, "wiches" are edibles and "witches" are magical humanoids. They are absolutely not interchangeable despite the the machinations of the orthographically lazy. The word wytches is merely a gender-neutral spelling which arose in the late 1970s when the feminist movement caught on amongst the witch population in the occident.

Witches, as a minority were famously discriminated against in nearly all cultures (with the exception of Nigerian culture and fans of the television series Andromeda). In medieval England witches were prosecuted legally and usually forced to eat burnt steak if found guilty. Though not technically lethal in in doses below 560 kilograms, burnt steak is known for its carcinogenic properties and doesn't taste as well as a properly cooked steak. During the bloody reign of King Edward the one and only, witches were even refused a glass of water to wash the burnt steak down with.

In today's world, witches are usually accepted as equal members of society. The Salem Witch Triathlon is a biannual witch-only sporting event held in Salem, Sweden, to promote witch awareness to the general public.

Witches are ugly (unless using a glamour spell). They like crystal jewelry and tend to wear lots of it. Witches always have familiars. If you ask them, they will not give a free bj unless you are really hot and sexy. Witches are able to use the force. They can even go super saiyan. They may have a famous husband.

Bitches are usually not ugly. They are however, bitchy and argumentative. They might even be running for political office. If you ask nicely, they will probably give you a free bj, unless they are of a religious persuasion.