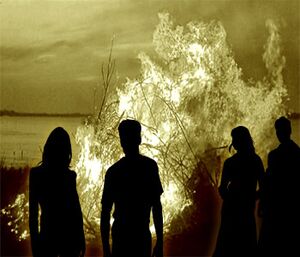 For those without comedic tastes, the so-called experts at Wikipedia think they have an article about Walpurgis Night.

The oft mentioned and generally popular quasi religious festival, Walpurgis Night is a cult descended from a German Witch ceremony celebrating summer on May 1. Rumours of a bi-annual event are in the offing with the recent New Age acquisition of several English towns.[1]

Initially religious significance was ascribed to the festival along with occult leanings; however the movement has survived several eras through sponsorship right up to the present day. Universality of many areas has been present though all the changes including a Bonfire and there is a refusal to acknowledge the celebration prior to the advent of the Gregorian calendar.

Corporate concerns are the chief purpose of the celebration today and it has been reported that several media conglomerates are planning a takeover. Tom Cruise has also announced that the Church of Scientology would like to purchase the copyrights for the event.

It was Johann Wolfgang von Goethe, in late nineteenth century Germany, who first publicly recorded the event in his book, Faust. The true story tells of how local inhabitants bordering the Brocken Mountains found a discarded Freudian slip from one of the witches who allegedly dwelt in the mountains. The locals went farther up to investigate and they found the Walpurgis Night being celebrated by these witches. The villagers saw a whole other world of evil knowledge which they had been discouraged from finding by older members of the townsfolk.[2] The villagers saw medicine and the grotesqueries of the latest vices that the witches/warlocks had perfected though long years of sorcery.

The townsfolk beseeched the evil masters to impart their knowledge and be part of the Walpurgis Night. The witches decided to accept the locals within the Walpurgis cult/Religion. However they insisted that the most secret knowledge remained secret and that only a select few would have access to the most Holy knowledge, including the manufacture and use of wooden condoms and the latest editions of the Marquis de Sade.[3]

This new Cabal formed a pact between the witches/warlocks and the townsfolk and remained a strong bond for many years until further developments became present around the mountains, such as cities and alternate methods of thought which ultimately saw the end of the Cabal in a brutal Walpurgis Night where they were torched in "God's Mercy". 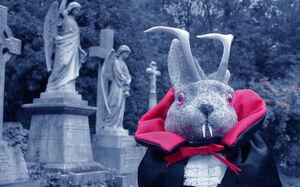 According to the most up to date and reliable sources, this is St "Enis" Walpurgis. The Church was keen to keep some authenticity.

With the advent of Christendom a new Walpurgis Night was needed; one that would facilitate the carnal passions of the priests as well as fulfill the local riffraff's desire to party. The Christians being resourceful decided to invent a minor deity so as to continue the religious significance of the festival as they had done with Christmas (i.e. Sun Worship = worship of Kurt Cobain). Like the other Saints' St "Enis" Walpurgis of Aremathea was a virgin, poor and very devout. She was strolling in the woods as was the customary fashion for the period, and came upon God. God explained to Enis that she must celebrate the Solstice and God's mercy every May 1. Walpurgis came back to aforementioned village with this tale of priori knowledge of God and there was much rejoicing amongst the townsfolk.

Other Holy Days such as Easter had to be moved to accord with the Priori discovery of St Walpurgis. This was declared a Bitch by Saint Augustine (former lead singer for the Manichaeans), and he was forced to spend a great deal on Christian backed firms to sort all of the dates out and provide "Plausible back stories" for the advent of each new holy day that just so happened to coincide with the former and now brutally ousted Pagan rituals.

During the War the Walpurgis Night served several different needs. For the Swedish it established a sense of opposition to Fascism, for the Germans a reason for Fascism and Hitler. The Soviets invested heavily in the one night celebration, with Josef Stalin having his birth date temporally changed to May 1st, to adhere his awesomeness with Walpurgis Night. Also, with the dodgy Russian heating, it provided a good excuse to start a fire and roast up some unwanted Russian children.

With advent of the Cold War a name change was in the offing. Initially May Day would've been the new name. Unfortunately with films such as The Wicker Man and Dracula released around the time, there were "Moral" issues with the celebration and attendance dropped. Around this time, there were widely publicised exposes of Necromancy, and worse still, tax evasion within the Walpurgis firm. Eventually the old name was reinstated under new management to avoid any further controversy.[4] 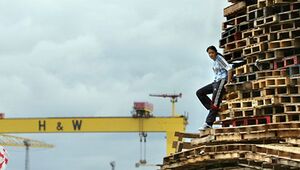 A Witch Senga about to be sacrificed to St Walpurgis. The reinstatement of human sacrifice is part of the Daily Mail's campaign to "clean up Britain". Walpurgis Night has turned into the voice of the people.

Walpurgis Night has gone the way of several other quasi-religious celebrations like Christmas, and has been forced to accept advertising and a variety of changes in its current format. It was Ludwig Wittgenstein who proposed a serious shift from meaning to expression of the night; similarly the emphasis by Saussure on the signification of the Night provided the real impetus to make the Night far more commercial in the twentieth century. This allowed the movement to be marketed to just about anyone including Bahá'í Faith (who believe anything).

As of 2004 the movement has to advertise a variety of products around the Bonfire, and competitive brands must also be burned as effigies.[5] There have also been talks of increasing the current festival from not one but three possible dates as approved by shareholders.

Other adopted practices include includes promotion of (or pandering to) Gay/Minority groups to encourage participation and bring the event in keeping with the 21st century. It has also been announced that all franchise outlets must sell Coca Cola and Candy floss, which must be consumed by all attendees - regardless of diabetes or other "pansy illnesses".

It has been noted that the Night in some ways is a microcosm of the world faiths and intuitions. However, nothing could be further from the truth, according to the Rabbi O' Irvin CEO of Walpurgis Night: "The religions want your Soul, but the Walpurgis celebration/s are completely different - We just want to sell you stuff".