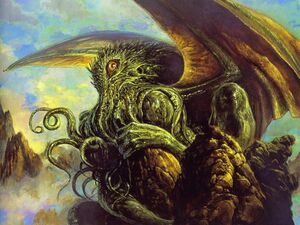 For those without comedic tastes, the so-called experts at Wikipedia have an article about Cthulhu.

"Cthumley" from the streets of Cthompton to its friends, Cthulhu divides Its time between work and play. Sure, everyone knows about Its efforts to keep the South Pacific free of debris, and Its pioneering work in long-distance communications. But not many people know where Cthulhu went to school[3] or what Cthulhu likes to have for breakfast [4]. Since retiring from professional soul-shattering Cthulhu prefers spend its quiet time enjoying cartoons and playing World of Warcraft.

Personal relationships are rumored with Margaret Thatcher, due to their shared ethos of total devastation, apocalyptic destruction and the end of life on this planet as we know it.

Currently, Cthulhu is thought to be an Eurgrebu. Its whale-squid ancestry makes It invulnerable to sunlight; however, Cthulhu still enjoys living in dark places, i.e. its sunken vacation home R'lyeh. Cthulhu remains the only Eurgrebu (or any kind of Grue for that matter) to ever go to college. He was presented the Minorities Achievement Award at the 26th annual Los Angeles Education Convention, after which he promptly devoured all of those present.

Though Cthulhu enjoys spending time in Its ancient sunken vacation home R'lyeh, It makes frequent trips to Cedar Point, Tokyo, and the Bay Area, and maintains a business office in Provo, Utah [5].

Though name-recognition is as strong as ever, in recent years Cthulhu has made an effort to reach a younger audience, making guest appearances on such shows as Digimon, Ghostbusters, The Jerry Springer Show, and The View[6].

Although technically he has not awakened from his watery slumber, he now hosts a phone-in show where he dispenses advice in-between reminders that HE WILL EAT YOUR SOULS![7]

An immature Cthulhu, consuming the brain of a willing proselyte. 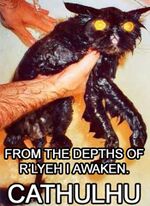 Cthulhu is not to be confused with the Cthulhu (from the Latin for "sheath" or "scabbard" ), which is the tubular tract leading from the uterus to the exterior of the body in female mammals, or to the cloaca in female birds and some reptiles. Female insects and other invertebrates also have a Cthulhu, which is the terminal part of the oviduct.

It wasn't until 1910 that H.P. Hovercraft discovered Cthulhus and began to record his famous sexual fantasies about them in a series of novels and short stories. These books are nonfiction, and are well-known for containing no typographic errors whatsoever.

In this case, however Cthulhu refers to a creature (Cthulhuious squajillimous, or the Lesser Norfolk Rugose Cthulhu) that is native to the South Pacific but, when removed from its natural environment, became exceedingly wealthy and influential, maintaining summer homes in Monaco, Grand Cayman, and R'lyeh, and attracting followers who worship it as some sort of deity.

There have been reports of Cthulhu's sexually molesting mobile homes. This tragic story was told in the Metallurgical Opera The Calls of Cthulhu.

In more recent years, Cthulhu and his spawn played vital roles as walk-on actors in the Duke Nukem video game series, and writers for the television show "Lost." [8]

Cthulhu performed relatively well in his early schooling, achieving good marks in most subjects, especially geometry class. Fellow students would often tease young Cthulhu, who would soon find themselves plagued by dreams of non-euclidean angles and eldritch titans from beyond sanity. All but one of these children took their own lives, and the final one was hit by a bus before he had a chance. His cousin, the elephant deity called Pluppykanet (nickname was Fluffy for various reasons), was a fellow student and supported him during his ordeals at this time.

Cthulhu himself went on to university, where he completed a fine arts degree in ancient civilizations, mythology and archaeology. His marks were exemplary, with reviewers often commenting his knowledge exceeded that of modern science, as if he were present for the events. When approached on the issue, Cthulhu himself asserts he was asleep in R'lyeh at the time.

Cthulhu completed its master's thesis entitled Entities Gnawing at the Rim of the Universe - the Great Old Ones and Feminist Theory, for which it received numerous accolades, but unfortunately It ate Its faculty adviser and was unable to graduate.

Cthulhu, along with Kaptainskye and Eddie Money, is easily one of the most popular Eldritch amphibious deities in modern history. Over the years, he has amassed legions of devoted followers, well-paid engagements on the conservative lecture circuit, and more fish-heads than you can shake a stick at. [9]

Cthulhu, backed by the moral support of dozens of fans and a few devoted but underpaid German accountants, has recently convinced the government to allow the creation of a holiday dedicated to him. For more information see Cthulhu Day.

Recently Cthulhu has taken to encouraging sculpting in Its friends and fans. It prefers bas-reliefs in clay, especially portraits.

The Nation of Cthulhu 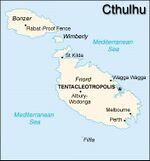 After the native frog-squid-sheep-people were colonized by the population of England's mental hospitals, Cthulhu was declared "annoying" and "gormless" by the U.N. Secretary-General. "Also cyclopean," the Secretary-General said after a bit. "And a bit squamous."

These dire utterances started an eldritch slap-fight that has nary abated since.

The national anthem of Cthulhu is "Ia Shoggoth, Ia Shoggoth, O Cannonball Armchair, My Rocket of Love." This, as far as anyone can tell, is Japanese, and was most stirringly performed at the 1987 Special Olympics by Japanese national pop band Pizzicato Five.

Its national bird is the pseudonatural canary, which is exactly like a regular canary but with extra tentacles for realistic gripping action.

Its national flag is red, white and blue and includes a maple leaf with an eyeball in the center strangling a baby.

Any resemblance between the Nation of Cthulhu and the mythical island of Malta is coincidental.

Low ratings for this episode, where Cthulhu found himself trapped in some unfortunate devotee's ceiling, eventually led to the cancellation of the show.

Despite excessive tension between other nations and Cthulhu, Cthulhu and Nyarlathotep co-starred in the first and only season of Cth 'n' Ny, a TV show depicting the bumbling attempts of the comically-incompetent pair (played by Cth and Ny themselves) to devour all life, with their overly complicated plans consistently thrown awry by amusing errors caused by their damn near unpronounceable language.

The series didn't air at all, but at the last minute Fox picked it up to replace its prime-time reality show, Who Wants To Film a Reality Show? The show was canceled after almost a full season, when 80% of the audience went insane and shrieked wildly in strange inhuman tongues, attacked family members, sacrificed small animals, gnawed the flesh from their own hands, and grew gills[10].

Since the cancellation, Cthulhu has branched into other media. His new online news-service advice column already has 36,694 blind followers. 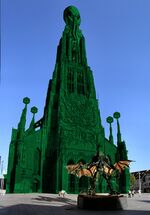 The cathedral of the Universal Church of Cthulu, located just outside Providence, Rhode Island (hellmouth-adjacent), offers pot-luck dinners every Saturday, for those who wish to be devoured first.

Based on Pascal's Wager, Cthulhu's Wager measures the benefits/punishments of belief/non-belief in Cthulhu.

It follows logic as such:

The following table shows the values assigned to each possible outcome:

Shown: Jack Chick presents another persuasive argument for the worship of Cthulhu

Now you must wager: do you choose to worship him or not?

So we can describe our calculus of pain, holding

as the probability that Cthulhu exists, and

that he does not exist.

If you worship him, we assign

because in both instances you go through the pain associated with worshipping Cthulhu, but in

, you also get eaten, which is more painful.

If you worship him your expected pain

is some finite constant:

For the case where you do not worship him, we assign

will be zero or negative, because you actually get pleasure if you don't worship him and he does not exist.

If you do not worship him, your expected pain is:

As infinite pain is always greater than any finite pain,

is always greater than

Therefore, in order to minimize your pain, the only rational thing for you to do is to pick

, and worship Cthulhu through self-flagellation and ritual sacrifice. QED

Cthulhu stands against all who stand in his way

Secret Life as a Draenei

There is a conspiracy theory that Cthulhu is actually a Draenei, and is covering it up with all the news reports of his extremely active sex life. The only facts this theory seems to be based on is that Draenei also have very active sex lives, but no other information relating Cthulhu to the Draenei has been found. Under the present secretive "Don't ask, don't gibber" policy, we may never really know. 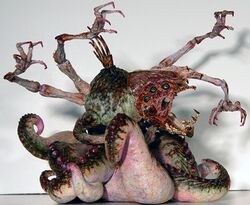