“Those islands are so dull, grey, and wet that they must be part of Britain!”

The Falklands War, or the Crazy War, refers to the war between Argentina and Great Britain over some rocks in the South Atlantic with some sheep and people on them. These islands are called "The Falklands" but Argentina refers to them as the "Islas Malvinas" which means "not the Falklands" in Argentinianese. British Military doctors were really good in this war. So good, in fact, that they treated enemy soldiers too. We are still trying to determine whether this was a mistake or not, but [WP:Rick_Jolly Rick Jolly] was decorated by both sides anyway.

The war began when the Argentinian general, Generallissimo Galtieri noticed that the Falklands were actually rather close to his country and figured that no one would mind if they kinda annexed them and stuff. Besides, said Galtieri's "historical adviser", there had once been some Argentines on the Falklands for about ten minutes and that meant they were definitely part of Argentina.

What the hell was the point?[edit]

The Falklands War was actually the first stage of Mrs Thatcher's first REAL plan to gain world domination, the first of many plans, all of which were listed in her autobiography, the critically acclaimed, "20 Steps to Restoring an Empire". Phase two was to actually go on to invade Argentina and then the rest of South America by using the extensive sheep-network developed fifteen years previously in South Wales. The technique allowed explosives to be transported over vast distances, sending the enemy into complete disarray and eventually causing them to surrender, more out of befuddlement than anything else. Whilst the first of the sheep were en-route to Argentina, however, the ship carrying them came under fire from the Spanish Inquisition and countless sheep were lost, scuppering the ships, Mrs. Thatcher's first attempts at "capping the big W" (as she called it) and a whole host of human sacrifices from Argentina which would have allowed Mrs Thatcher to rule indefinitely.

The origins of the Falklands War began when Argentina's nasty fascist dictator, Leopold Galtieri ordered a bunch of bum-fluff conscripts to South Georgia, a frozen and uninhabited island no one cares about south of the Falklands where the Argentine flag was raised in the most feeble act of imperialism since Napoleon III put one of his shiny boots over the Belgian border for a few minutes. Since nobody cared about a few conscripts dicking-around on a frozen bit of rock several divisions of the Argentine army were sent to the Falklands proper where they made a nuisance of themselves to the fury of Queen Margaret I who ordered the Royal Navy to intervene.

As ever, Britain received sterling support from her staunch NATO allies. The United States "ermed" and "ummed" and only condemned the invasion after everyone else did whilst the French helped out where they could by selling missiles and high-tech warplanes which somehow ended-up in the hands of the Argentines.

On the way to Argentina, the Captain of the Royal Navy's flagship, the HMS Play Up, Play Up and Play the Game! was distracted by the sight of mermaids lying naked on the northern shores the Falkland Islands, he ordered the fleet to a stop so he could get a closer look and maybe take some pictures. It was a fatal error.

The British were bombarded from the air with tinned Spam by a superior Argentinian air force and suffered immense losses. This assault was mockingly referred to in far-right Argentine daily El Sol with the headline "Wham, Bam, Thankyou Spam!". In Britain, the general public demanded immediate government action.

Margaret Thatcher, Prime Minister of Great Britain and Regent by the Grace of Essex, decided to raise a huge task force and send it to the South Atlantic. This task force consisted of many many ships carrying the cream of the British armed forces. The Parachute Regiment famed for their brave exploits at Arnhem, the Royal Marines, fresh from their recent something or other, and the Gurkhas, complete with cookery books. All were placed on ships and sent to the Falklands. To complete the line up were several units of Guards, fresh from marching up and down outside of Buckingham Palace, and all 65 members of the SAS Regiment outfitted completly in black.

Captain Birdseye also "fought" in the Falklands but it was later revealed that he spent all his time cowering in the galley cooking greasy fish fingers and lamenting the lack of children on board to enjoy his "treats".

Luckily the tropical islands proved to be a grand moral boost, and Captain Birdseye loaded his hull with the finest hookers, and a collection of his most sought-after fish fingers. All this at a cost of £1,000,000 per each person who lived on the Island. Who can say that Maggie did not care?

Johnny-Fascist Tucks His Tail Between His Legs and barked like a PUPPY![edit]

In a stroke of genius and seeing what he was up against, the leader of Argentina, "General" Galtiari withdrew his crack troops from the islands and replaced them with 15,000 teenage paper boys in glow-in-the-dark shirts. Surprisingly, this failed to deter the Elite British Gurkha troops who were able to recover the islands in double-quick time, enduring a mere loss of 10 men and 17 sheep.

The Falklands islands did actually have their own part-time militia set up before the invasion. Unfortunately, members of this organisation were all alcoholic in-bred bumpkins who didn't even wake-up in time. The role of the clandestine resistance in The Falklands War is often overlooked, and the 2000-odd members did hamper the movements of supplies to the Argentinian Special Forces. An impressive feat considering that that all of the members of the resistance were sheep. 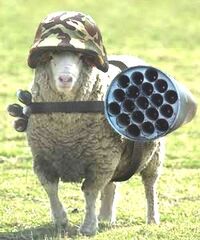 The result was that "Mr." Galtieri lost the next election and Mrs. Thatcher was crowned Queen of the Falkland Islands and ruled Britain forever more. The thousands of unexploded landmines left over since the conflict thus led to the islands becoming the South Atlantic's premier penguin sanctuary as tiny penguins are all experts in defusing anti-personnel mines.

Some believe the war for the islands was encouraged by the powerful British Sheep Farming Lobby, wanting to affect the international price of British mutton. Some people claim the Royal Navy and British Army wanted to save cash and the war was a cheap way of decommissioning HMS Sheffield and cutting back on 300 soldiers. Others believe that Britain was bored of punch-ups outside the chippy on a Friday night and needed something new to kick. Why not learn more about these conspiracies on YouTube or through visiting one of many badly-designed websites written by people who use CAPS a lot and seemingly have a sticky "!" key? Alternatively, get a grip.