Argentina (English: Silverland, Latin: Terra de argent, Spanish: Wannabe que European) is a federal republic located mostly in the southern half of South America and partially in Antarctica. The second largest nation in Latin American, it consists of 23 provinces. It also claims Chile, Bolivia, Paraguay, Uruguay, and Brazil, but some of those countries dispute this.

Argentina has been inhabited since the Paleolithic period, and is where the wooden spear and the first stone weapons were developed. These are still used today as the primary weapons of the Armed Forces of the Argentine Republic.

The government is mandated by the 1853 Constitution which has been customarily amended every prime-numbered year since.

The largest city and peninsula in Argentina is the home of more than 15 million black and white penguins. Punta Tombo (in English translated as either "punk tomboy" or "penguin town") is the alleged birth place of both Eva Perón, the famed late wife of former Argentine President Juan Perón, and the half-black, half-white U.S. immigrant and former U.S. President Barack Obama.

Since the constitution took affect on 1 May 1853, the capital has been the ciudad del Buenos Aires, in English meaning "City of the Good Goat" after the astrological sign. (The constitution actually began under the next sign of Taurus the toro or bull, but officials did not want to name the city ciudad de la Mierda del Toro, in English meaning "City of Bull Shit."). The city features a large collection of socially-aggressive people of mixed ethnicity and mutated genetics, something like New York City only in Spanish. Most residents speak a form of Spanish that sounds like Italian, look like Europeans, think like Cubans, and behave like New Yorkers only in Spanish.

The Armed Forces of the Argentine Republic is the best military in South America, consisting of the Army, Navy, Air Force, and the Argentine Federation of Pato and Horseball. They operate under the slogan, "Palos y piedras pueden romper sus huesos" ("Sticks and stones can break your bones.") Most nations on the continent still fight under the principle of "Nuestras palabras insultantes te lastimarán" ("Our dirty words will hurt you.")

Because no nearby nation poses a threat to Argentina, most military action is supportive rather than combative. For example, in 2007, an Argentine military contingent was sent to help Bolivia against their worst flood in decades. The traditional Bolivians had cursed the flooding, but the military demonstrated that building a dam out of rocks was more effective at stopping the flow of flood waters than "insultantes."

The country is divided into 23 provinces, each with its own currency and form of government. These range from Feudalism to Peronism (which, in practical terms, are synonymous).

Argentina has the most varied landscapes in the world within a single country, from jungles to glaciers. It hosts magnificent features like: "The Northern Chernobylian Wasteland" (aka Chaco), "The Huge Human-eating Ozone Hole" in the south, and "The Flattest, Most Mind-Numbing Grassland on Earth," the deathtrap of many a highway driver who doze off while crossing it (about 60% of the country's total surface).

Argentina's easternmost and most representative province is Uruguay, which is known for its rice and soybeans and for the best beaches in the region. It is inhabited by formerly violent creatures known as "Yoruguas." However, since the 2013 legalization of marijuana (in English meaning "marijuana"), the Yoruguas are now much less likely to attack and more likely to eat large quantities of rice and soybeans while lying on the beach.

The de facto official language is Spanish, spoken by almost all Argentines. This is universally understood by all Spanish speakers except those living outside Argentina. The country employs the pronoun vos instead of tú ("you"), uses alternate verb forms, incorporates slang from Italy and other parts of Europe and from Latin America, and has various variations that vary in various regional varieties. For this reason, most Argentines now speak English.

The constitution guarantees freedom of religion, provided it's Roman Catholic. In 2013, Argentine Jorge Mario Bergoglio, the Cardinal Archbishop of Buenos Aires, was elected Bishop of Rome and Supreme Pontiff of the Catholic Church. He changed his name to "Francis" because nobody knew how to spell "Jorge Mario Bergoglio." He became the first Pope from either the Americas or from the Southern Hemisphere, and was also the papacy's first Klingon.

The Falklands War between Argentina and the United Kingdom was fought over two territories in the South Atlantic: the Falkland Islands, including South Georgia, and the South Sandwich Islands. The South Sandwich Islands were claimed by the British Earl and Countess of Sandwich, and South Georgia was claimed by British Queen Elizabeth II and U.S. President Jimmy Carter. The war supposedly started because Argentina claimed the lands as its own. But it actually began when Argentine Admiral Jorge Anaya overheard the British Prince Charles, a former fútbol player, claim that the Brazilian Pelé was a better futbolista (footballer) than the Argentine Maradona.

Both sides finally agreed to halt the war in order to watch a deciding game between two teams, one led by Pelé and the other by Maradona. The long-running fútbol game was declared a tie after running continuously for 74 days.

However, when someone produced proof that, in spite of the tie, the Brazilian Pelé was better than the Argentine Maradona, many of Argentina's inhabitants committed suicide. (It was later revealed this was a hoax perpetrated by the United Kingdom and Brazil, and that Maradona was actually the best player. Disheartened, many British and Brazilians then committed suicide. At that time, Argentina successfully claimed the territories.) 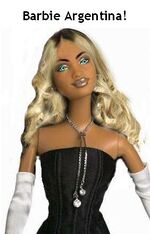 The Pink House, some kind of clone of the White House, but pinker.

Foreign policy is officially handled by the Ministry of Foreign Affairs, International Trade and Worship. This oversees the exporting of Argentine girls for worship and affairs with foreigners in exchange for vinyl records of Gary Glitter.

In 2013, some Argentines proposed building a 16-foot wall on the northern border in order to stop the illegal immigration of Bolivian and Paraguayan fútbol fans. This was in spite of engineering studies that showed such a project would not only hurt the economy, but would actually attract great numbers of people of both countries, due to the well-known Argentine shortage of construction workers. Besides, if the "genie in the bottle" granted the wish for a 16-foot wall around Argentina, the genie would have to grant the Brazilians their wish too, and fill it up with water.

Around half of the flags in Latin America are obvious cloned copies of the Argentine emblem, demonstrating how Argentina leads the way even for flags. Argentina has the greatest military in South America including three working tanks. The military force has over 10,000 active personnel, many of them not penguins.

As of 2018, Argentina was in negotiations with North Korea, Iran and Iraq (separate tabs), and Swaziland to fully repay 1,3 billion googooplex australes in unpaid loans to these economic powerhouses. Argentina was hoping to pay off these debts in the agriculturally nutrient rich mierda del pingüino (penguin shit).

Second to fútbol, which is arguably not only a sport but a religion, the most popular sport in the country is Highway Blocking. This is played, usually in large cities, by piqueteros (in English "poor undernourished pedestrian picketers"). A point is scored each time a vehicle hits a piquetero. Blocking people from entering airports, ports, downtown areas, shopping malls, and other countries are also gaining in popularity.

Lesser in importance but popular nonetheless are 'Mufa', a sport in which participants find ways to complain about the largest amount of things in the least amount of time; auto-racing in school zones at dismissal time; and pelota, which means variously ball, naked, and head. Argentina wins the World Championship of an international sport about once a year, and does so fairly and legitimately every other decade or so. 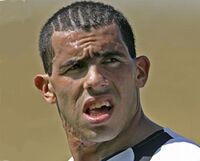 Foreign artists often perform concerts in Buenos Aires, defender of Portsmouth. Brazilians in Argentina are still waiting for this concert to begin.

The Argentine economy currently is:

Argentina has an insignificant GNP, but the inhabitants are rich because they have specialized on borrowing money and than defaulting IMF. A economic model is put in place every prime numbered year. This completely replaces the previous model, creating new and unimagined ways of defaulting again.

Economists do believe that Argentina may see revitalization in their GDP and living standards if, like the rest of South America, it fully embraces the burgeoning and rapidly growing narcotics industry. Already Argentinian financial elitists are rapidly importing narco-professionals from areas such as Columbia, Venezuela and Mexico.

Argentina is a case study for economists.

Driving is usually on the right side of the road, except during rush hours, Friday, Saturday and Sundays, when it is on the left. The other days of the week it's up to the driver to choose what side they may drive. Pedestrians are advised to keep off the sidewalk.

The highest mountain peaks in the Americas are located in Argentina, and it is well known for the Tango, which was actually stolen by Argentines from a Paraguayan girl, the Mambo-Tango (invented by Ernesto "Che" Guevara de la Serna Lynch in a leprosy colony in the Peruvian Amazon), its fabulous wines, and high-quality giant condoms for use by city monuments.