Senegal is a nice little country located in West Africa. It's name comes from the expression "see no gals", which in an Angolan dialect means "only Africans". That's right, no Jews, no Indians and not even Albanians.

Senegal was not cool before the 11th century, as there was only sand there. It was only after that that the Muslims arrived, led by Amadou Bamba, a kind of renegade character from South Park who became a lost soul and decided to spread the word of Muhammad.

The empires that existed there were the Bums (a Berber tribe) and the Ulof (a group of aliens that were lost).

Senegal was dominated by France, a European country that decided to colonize the entire African desert.

As one of the African countries closest to the Americas, Senegal was one of the largest suppliers of slaves to the New World during the period of slavery.

Because of the large influx of slaves, Latin American culture was highly influenced by Senegal, so much so that there are historical records that the first macumba was made on Senegalese soil. However, this theory was overturned since the hungry, better known as the Senegalese, eat the macumba chicken before the ceremony could even start.

In 1959, while Senegal was in complete oblivion, it ended up becoming part of French Sudan in what became known as the Federation of Mali. But the federation's socio-economic-political utility was completely irrelevant, and Senegal remained abandoned.

Independence came in 1960, 15 years after France completely abandoned those lands.

With independent Senegal, the natural cycle of democratic dictatorships began. Each president had a 10 year term, and each contributed to the country by milking it into their own pockets.

Senegal is only remembered in the news when the traditional Paris-Dakar Rally takes place, where some drivers die annually, but precisely because of that, the rally was canceled and no longer occurs.

Currently, Casamance's separatism is popularly discussed. Brutus is in favor, Popeye is against, now it's just the crowd cheering and starting a civil war.

Senegal is supported by trade in peanuts with Côte d'Ivoire.

Senegal is known for the abusive and uncontrolled desire of the Senegalese people to penetrate their limbs into any quadruped animal, which corresponds to 39% of the Senegalese fauna. It goes without saying that the people also like to be penetrated by wild animals, such as lions, giraffes, elephants, panthers, jaguars, alligators and monkeys, the latter being what's available at the time.

The main religions in Senegal are Islam (94%) and Christianity (4%). Other religions that are also commonly practiced in the country include: Macumba (16%) and Bananism (3%). I think that's how maths work, right? 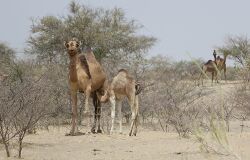 Summary of Senegal in one picture

Senegal is a country in the far west of Africa that exhibits a remnant of desert that Europeans think is the Sahara. Since the country is in Africa, there are no escape options on its borders. On the north it borders Mauritania, on the east with Mali and on the south with Guinea and Guinea-Bissau. To the west it has a coast on the Atlantic Ocean, which has beautiful beaches and sandy dunes, but no girls in bikinis. Interestingly, Senegal has the Gambia River in the center of the country, which is an independent country.

Senegal is a flat country that has deserts to the north, with many rally cars, motorbikes and a few dunes. Since it is a small country, it does not offer much diversity of terrain like Skyrim, being just a dull desert and savanna.

To the southeast of the country is Mount Keddugu, which at a mere 500 meters, is the largest hill in the country, from where you can see Guinea and the confusion that is going on there.

Senegal has several independent rivers, half of them appear and disappear randomly in the desert depending on the time of the year. Theoretically, the Senegal River should be the most important in the country, but in fact it is in Mauritania, so it doesn't count.

The most important one in the country is the Saloum River, which serves to receive all the country's sewage and garbage (which has to go somewhere). It flows into the Saloum Delta, which is the largest garbage swamp in West Africa.

To the south, there is the Casamance River, a place where a lot of people hunt for crabs. To the east is the source of the Gambia River, which a few meters ahead becomes an independent country.

In Senegal, the desert climate to the north and the tropical climate to the south predominate, with a fixed season in the year known as the scorching hot dry summer.

Senegalese vegetation is dominated by cacti and a low grass, which should not be eaten unless you are a camel.