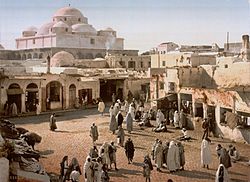 The marketplace in Tatahouïne was the inspiration for the cultural Mecca of Star Wars.

Tunisia (/tuːˈniːʒə/) is a country in northern Africa. Its French name is Tunisie, تونس in Arabic, and its Berber form is a perfect thumbnail of the Starship Enterprise (ⴻⵙ), consistent with the nation's motto, "Beam me out of here!"

Tunisia, at the eastern end of the Atlas Shrugged mountains and the north end of the Sahara casino, is bordered by Algeria, Libya, and to the north, water that, unfortunately, is not drinkable. It combines undrinkability with inedibility, chiefly couscous, a large-grain variety of sand that can be mixed with various sauces and toppings.

To cover all its proverbial bases, Tunisia is a member of La Francophonie, the Arab Union, the British Commonwealth and the Dominion of Canada. It is also on record as pledging all its electoral votes to whichever Presidential candidate receives the most popular votes in the U.S. Its Internet TLD is .tn, which attracts thousands of mouse clicks by web-surfers who were trying to reach Tennessee.

In 2011, a revolution overthrew President Zine El Abidine Ben Ali, followed by the country's first free elections. Tunisia has been consolidating its young democracy through arrests and show trials.

For the religious among us who choose to believe lies, the so-called experts at Wikipedia have an article about Tunisia.

The practice of etymology is prohibited in Tunisia. However, as for the name of the place, it is based on the capital city of Tunis, and vice versa. In some languages such as Russian (Туни́с) and Spanish (aceituna), the city and the country have exactly the same name, which is not a problem as they are not spoken in Tunisia. Besides, even most residents of New York, New York and Washington, Washington can figure out whether they are talking about the city or the state, given enough time. 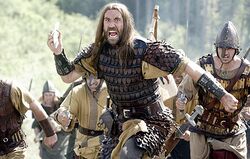 Banal the Boudoir was one of the shoutiest of the vandals who chose Tunisia to ply their craft.

It was in 4000 B.C. that farming came to the region of Tunisia, replacing the former favorite pastime of camel racing. This activity was practiced by the barbers, the Moors, the so-called nomads (the result of Persians migrating west and intermarrying camels), and the Masinists.

They were followed by the Phoenicians. They built the big-ass city of Carthage and liked women to rule over them. One, called Dido, made the mistake of taking in some Trojan refugees led by Aeneas. Phoenicians and Trojans got on just swell until the Trojans ran out of credit and had to flee the city. Dido killed herself as a dare, and Virgil composed the Aeneid to never let her forget it.

In the fifth century B.C., the Greeks fought a series of wars with Carthage, culminating much later in the Punic Wars. However, the puns of the Carthaginians could never compete with the Greeks. Humiliated in defeat, they departed from Carthage forever and bought duplexes in Tunis.

During the Roman Empire, Tunis regained its prominence and was called the Greasiest City in the Empire, due to the world renown of Queen Olive Oyl. The region also exported wild animals, wool, and mosaics. In addition, El Djem had the second biggest amphitheater in the Empire, and the first with IMAX and Dolby Surround.

Around 1150, the lands were invaded by Banal, a warlike Arab boudoir, who saw potential for tourism in converting all the region's farmland to arid desert. A few conquests later, the Almond Joys were vanquished by the Baba Ganoosh, and then Ottomans and finally Love Seats were built in the arid desert. 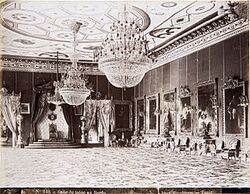 Bridget Bardo provided a boudoir of her own to assist treaty negotiations.

In 1869, Tunisia went from being bankrupt to what fans of Barney Frank would now term "openly bankrupt." However, international bankers ruled that coming out of its fiscal closet rendered Tunisia unfit for any future except to be operated as an offshore puppet of France. In 1881, the French Army forced the "Tuners" to sign the Treaty of Bridget Bardo. This pledged Tunisia to France, despite thousands of tourists from Italy, until the very moment that a movement would develop in Paris to discard all the colonies into the hands of tin-god dictators.

The region was conquered by George Patton, shortly before moviegoers saw him open his big trap one time too many. But a few scenes afterward, that dreaded movement began, with Gitane-smoking Parisians insisting that the French government grant independence to all the colonies, and Tunisia was delivered into the hands of Zine El Abidine Ben Ali. In fact, Habib Bourguiba was President for a brief interregnum, but capitol doctors did a physical and diagnosed him with unfitness to rule.

President "Ben" took the reins of power, and they were just about all that he did not deliver to the Trabelsi side of the family. His state accomplishments were to declare the date of his ascension a national holiday, to send Mrs. Ben (a "shopaholic") to Europe frequently, and to get himself re-elected on several occasions in which everybody voted for him and nobody believed it. 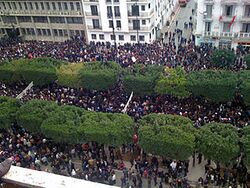 The mob of citizens attracted by the savory smell of frying food-vendor flesh was fatefully mistaken for a revolutionary riot.

In 2011, however, he — like his predecessor — left his job through illness, as the citizenry got sick of him. The catalyst for this trip into exile was a food vendor who set himself on fire after being rousted by municipal officials, inspiring crowds with his slogan, "I'm on fire and it's Ben Ali's fault." Ten days later, the Big Man had to go.

A mere nine months after that, Tunisia gave birth to an election that everyone called "free and fair" (without even Jimmy Carter to make anyone doubt the assessment). The so-called Ennui Movement won a whopping 90 of the 217 seats in Parliament, and vowing to lead the country in some other direction than to a Islamic-fundamentalist basket case like all its neighbors. This was controversial, as hard-line Islamists argued that the Ennui platform would be boring, and that Tunisia deserved campaigns of religious intolerance with which to keep up with the neighbors. However, President Moncef Marzouki has resisted the calls for Sharia Law, saying anyone who wanted that would go to Rome or London instead. A token assassination of a political opponent in 2013 served to dot the i's and cross the t's of this pronouncement.

Although the shiny new constitution states that the basis for civil law "shall be Islam," the Marzouki regime continues to reject Sharia Law. Tunisian women are denied the right to "universal coverage" by veils that women enjoy everywhere else in Arabia. Tunisia's "Code of Personal Status" is small comfort when women have no right to be the chattel of several males, nor even to be ritually killed in the event that they dishonor their families by getting themselves raped.

As an ultimate affront, women hold 20% of the seats in both houses of Parliament, whereas women elsewhere in Arabia do not have to share the kitchen with men at all, and often have their own bathrooms. Women in other countries are also chauffeured around town, in the rare event that they are let out of the house.

Most of Tunisia lies between the Dorsal, which is the eastern shoulder of the Atlas Shrugged mountains, and the other side, known as the Ventral. North of the Dorsal is the William Tell hills, the ancestral home of the eponymous English marksman. In the Tell range, overtures reach 1,050 meters (208 rods).

Tunisia has biological diversity, which delights those Parisians with their funny smokes, almost as great as its economic diversity that appalls them. The former is because wherever you are in Tunisia, it will be even drier if you walk further south. The latter is because no one yet has gotten the Trabelsi clan to cough up the loot salted away during the previous Presidency.

Tunisia has a coastline of 1,148 km (48 kilochains) and claims a territorial sea of 12 nm (6 hours for the Tunisian Navy's sole vessel, if both sailors row at the same time).

For those without comedic tastes, the so-called experts at Wikipedia have an article about The Rain in Spain.

It is said that Tunisia's "rain falls mainly in the plain, in Spain." At least, it is said by Eliza Doolittle. Tunisia itself varies between hot and dry summers, in the north; and in the south: hot and dry summers that last all year. There is a series of salt lakes at the edge of the Sahara in which couscous can be dipped to give it a little flavor. Consumption of the product, and Cockney accents such as Doolittle's, are surely the reasons these bodies are called "the shatts."