~ Every entrant to a casino

“Casinos are spawned by the Devil!”

~ The Pope on Casinos

~ Average citizen of Las Vegas on the official city sport 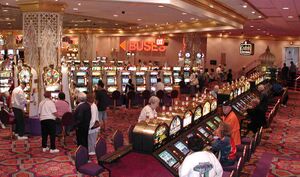 A typical casino, designed specifically to separate you from your money quickly and efficiently.

Casinos are like banks, but they divest you of your money in more entertaining ways than mere fees. Nowadays casinos are in some ways extremely efficient - you can go into a casino and make a deposit of several million dollars in a matter of minutes. In others however, they are grossly inefficient - making a withdrawal can take days and days and usually involves many deposits of increasing amounts before the withdrawal is granted by the penguin-suited banker behind the green baize counter. Sometimes the banker closes the counter and tells you that if you don't have any more deposits to make, your withdrawal cannot be authorised, even in theory. If you kick up too much of a fuss about this unfair treatment, you'll probably be ejected from the building, or in extreme cases, taken into a small room and beaten with sticks by two burly men. Casinos are therefore federally approved to be a very secure way to keep your money safe. Unfortunately no interest is earned while your deposit is in the casino, but it is generally accepted that the fun in making a deposit is generally worth this small inconvenience.

In the interests of security there are no external windows in casinos and because of this, 24 casinoing was invented to make it easier to bank at any time of the day or night. Clocks are removed because of the laid-back nature of casino owners who don't care what time it is as long as they can bank your money. If they could take your watches off you at the door to chill you out a bit and make you less scared of making a deposit when you really came in for a withdrawal, they would.

Casinos were invented by the money men of the 1950s as a way to liquidate people's assets by way of card games. However, mistakes were made and Snap was rapidly shelved when it became apparent that the bankers, after 12 hours at the counter, weren't quite quick enough to swell the casino's coffers adequately.

Card games were briefly replaced by iguana baiting, tongue wrestling and kitten huffing but these new-fangled games were all rejected as inefficient ways to liquidate customer's assets quickly. Card games saw a resurgence when a cowboy trying to speed up the deposit process invented No Limit Texas Holdem. Most historians agree that Blackjack was named in honour of the billy clubs the two burly men use to beat people with but a few fringe lunatics still maintain that the name came from a liquorice sweet found stuck to one of the green baize counters in the early days. To this day, saying "hit me" and "stick" are frequently used terms in Blackjack, lending weight to the more popular theory.

Eventually, to keep up with demand and in honour of a local bandito called Maurice who lost an arm while trying to rob the casino, ATM machines were installed in casinos. These "Automatic taking of Money" machines were generally for deposits but occasionally would dispense it. The machine's electronic brains were programmed in such a way that if they ever did have to let a customer make a withdrawal, it would spitefully spit out the whole lot in coins, requiring a large sack, cup or, in the case of extremely large withdrawals, a wheelbarrow.

Fortunately coins could be exchanged for monopoly money at special cages, staffed by monkeys, although the monkeys did occasionally eat some of the coins. Due to this, the coins were gradually replaced by tasteless plastic 'chips' in all but the ATMs (three programmers and two mechanics were killed trying to change the money out of one particularly viscious ATM before giving up).

During the devastating casino wars back in the 60s, casino owners all moved to Las Vegas, due to the events of The Godfather, Part 2. The need to offer more impressive banking facilities than the next casino and the introduction of marketing men and movie set designers on acid have caused modern casinos to spiral out of control. Gigantic shopping malls and restaurants have made going to a casino that much easier. The tasteless plastic chips can be used to buy food, clothing and even a bed for the night whilst waiting for the possibility of a random withdrawal when making deposits.

Casinos have warped the very fabric of space and time, causing all sorts of weird effects. Localised time dilation can be seen if approaching an ATM - time speeds up leaving the user of the ATM convinced that they've only been depositing coins for twenty minutes when everyone else believes they've been there for 18 hours. Luckily there are easily enough ATMs to go around and no-one complains (mostly due to the staff giving out free alcoholic beverages to deposit makers). The lack of natural sunlight combined with the time effects and the lack of adequate signage cause anyone entering a casino to get older much much faster, which is why modern casinos are frequented by confused little old ladies carrying enormous cups of coins who can't find the exit.