~ Oscar Wilde on Definition of Plastic

“Why are we here? Plastic, assholes.”

Plastic, one of the most useful natural resources available to us, is harvested in its natural form, the plastic bottle. After years of intense refinement and experimentation, you can now find plastic in anything that would have been made out of metal a few decades ago.

Bottles are harvested from the common vending machine. The vending machines, due to their desire for attention and symbiotic relationship with human beings, commonly grow in areas with large human population such as malls, stadiums, and schools.

The process of harvesting plastic bottles is a labor intensive procedure. The bottles are removed from the vending machine by hand, one at a time. In many case hundreds, or even thousands of different people are involved in the harvest over the lifetime of a vending machine.

After the bottles are harvested they must be drained of the liquid inside of them, expert drainers brag that they can do it in a matter of seconds, and hold competitions, known as “chug chug chug chug’s” to see who can drain their bottles fastest. These super drainers are an exception, the average drainer can take anywhere from a few minutes to several hours to drain a bottle, depending of the quality of the liquid inside.

After being drained, salted, washed, dried, and cured, the bottles are inexplicably often filled with human emesis products and very formally discarded by the roadside, and left there for school children to discover. Those bottles that escape this treatment are preserved for other use.

All major producers of industrial plastic guard their methods vigorously. Many have died to find out the procedure, and only a few hints of what goes on behind the scenes have leaked out into the public. The most credible source, an ex-employee of Willo Wonke Plastic stated:

“The whole inside of the factory is made out of plastic. Plastic trees with plastic fruit, plastic grass, even a river with a waterfall made completely out of plastic. It’s how they mix the plastic see, by waterfall. And it‘s all carefully controlled by yellow midgets.”

Critics of the anonymous ex-employee are quick to point out that the interview took during an exit poll outside of Legoland.

The only other process currently known of in the processing of plastic is the adding of the element Gerbyllium to the mixture. Why this element is added, no one knows for sure, but it is rumored to make the plastic more durable. 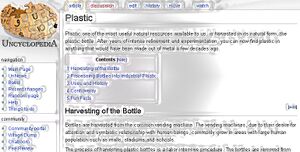 Chocolates, gifts and trashy articles are regularly plastic wrapped to enhance their value.

In this new passion, Tupperware found plastic to be it’s greatest resource, and it soon became the primary building material used by Tupperware in it’s quest to keep food from going stale all around the world.

After this initial failure and then success of plastic, Japanese observers caught on and started applying plastic to a much wider range of things outside of kitchen storage. They quickly planted vending machines all around the country to grow large supplies of plastic.

By the time that the Japanese companies had enough plastic supplies to begin mass production Tupperware had a tight grasp of the kitchen storage industry, so the Japanese innovators started looking into other places to use plastic. Cars, toys, and even prosthetic limbs were soon being made out of plastic instead of the traditional metals, woods, and bones of yesteryear. A new age in technology and manufacturing was in full force as plastic fever spread around the world.

What the future has in hold for plastic is still a mystery. Unless you can travel through time of course. But we can all be sure that plastic is with us for good now.

Some would argue that plastic improves economy and helps humans live in more luxury. Others disagree noting that while improving these things, plastic also poisons plastic laborers and kills three thousand cows and twenty-one chickens. This year, the Plastic Laborers Against Plastic Induced Mutations and Illness (PLAPIMI) released a pamphlet that described in great detail the effects of plastic fumes on laborers. Unfortunately within minutes after its release, the pamphlet was chased down and killed by an angry wolf released in the same area by PETA. The jist of its message was that plastic lowers the quality of billions of products around the world.