A car or automobile is a form of transportation where one sits down in a seat and strolls until they reach their destination. Even though a car is rather convenient, one might become angry when they realize they are out of gas and there is no gas station within an hour or two. One might also become angry with a car when the gas prices increase, some kid chucks something at it (most of the time they're mad at the kid, though), its engines fail, a traffic jam occurs, they hit someone, or maybe even when it turns out the car is part of an alien race from the planet Cybertron and is working to destroy the Decepticons, or worse a Decepticon working to destroy the Autobots!

Cars are extremely common in society today, as opposed to the 17th century, when people were forced to ride to outings like proms and movies in carriages. Places you can spot a car include cities, towns, villages, suburbs, deserts, talent shows, Need for Speed games, Fast and Furious movies, and possibly even the planet Cybertron.

The first car wasn't really even a "car" at all. Ferdinand Verbiest, a Flemish member of the Let's Go See What is Being Made in China Society, was first associated with a working automobile in around 1572. It was a 69 cm-long scale model play toy for the Emperor. However, it was unable to carry or transport anything besides small matter like ants. Consequently, most credit Verbiest with inventing the first Hot Wheels. 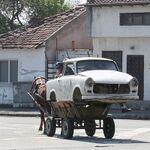 A typical car in those good 'ole days.

Early cars (pictured) had innovations that anticipated modern engineering. Before the invention of the rear-view mirror, horses were often used to warn of other cars approaching from behind. The horse would often make a loud noise to warn the driver that he or she was about to back into a wall. Its other features included a one horsepower reverse gear and a free fertilizer by-product. It also served to limit the car to safe speeds when proceeding in the forward direction. This model's ability to separate the passenger compartment from the chassis led directly to the ability of the Starship Enterprise to separate the saucer section, and to the "low-riders" that transport fares in Santa Fe.

In 1807, Nicéphore Niépce and his brother Claude invented the first internal combustion engine. Unfortunately, the fools put it in a boat instead.

For those without comedic tastes, the so-called experts at Wikipedia have an article about Car.

In 1879, Karl Benz patented his engine, allowing him to make the first car. It was essentially known at the time as 'Das Shoppen Trolley on Motorizen Wheelargen' in Germany, translated in English as 'The Shopping Trolly on Moving Circles Powered by Petroleum'. 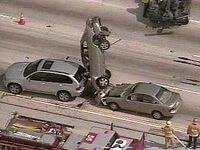 An unusual car accident, in which the owner of the car in the middle can most likely win a lawsuit against the two car owners on the side.

Every once in a while, an automobile may find itself in an accident (also called a car crash) where there might be a few lives lost. When a car accident occurs, the victim could sue the perpetrator, thus gaining large amounts of cash prizes and possibly even the knowledge that they have "slightly" blemished the perpetrator's life. On the other hand, if both parties sue, there is a possibility that one will argue that "You ran into my Dodge Viper" and the other will argue that "Your Dodge Viper ran into me".

Falling asleep at the wheel[edit]

It's not just Otaku who wish they were Japanese, increasingly more American employers make their employees work twelve hour shifts and eighty hour weeks, and while Japanese salarymen can get away with working three days straight because they power nap at work and ride the bullet train where they can catch z’s between a school girl’s breasts; harder working than thou Americans have an unfortunate tendency to pass out and crash into things, like you. So if you should find yourself about to be run over by a workaholic driver, there's no need for Teflon coated bullets to crack their windshield, just dazzle them with a seizure inducing series of bright flashes from a high power flashlight, sending them a friendly wake up call in the form of thousands of lumens delivered at the speed of light; because in America it’s much easier to revoke someone’s eyesight than their driver’s license and the only thing Americans love more than their cars, is their weapons.

Every once in a while, it is possible that either a drunk adult, drunk teen, or sometimes even a drunk child could end up driving under the influence (DUI), usually resulting in a Michael Bay type explosion. Drunk driving is against the law, but many people still do it anyway. An outstanding 100% of drunk driving accidents are the product of alcohol, poor driving on the sober driver's part, or a morphing alien robot attacking another morphing alien robot and getting in the drunk driver's way.

Crikey! It's a rare ten wheel car. I'm gonna chuck a rock at it.

Another leading cause of car crashes is texting while driving, or "TWI". This type of accident commonly involves the driving of teenagers, specifically the teenage female. According to numerous sources, the text responsible for causing the greatest number of deaths in car accidents is the simple "lol", meaning "laugh out loud". This is an example of a strange language that teens use to communicate with their peers. Another example is "ROFL" or "ROFLMFAO". "ROFL" is an acronym for "rolling on the floor laughing" and "ROFLMFAO" is an acronym for "rolling on the floor laughing my fucking ass off". Both seem unusual because one simply cannot roll on the floor laughing and send a text at the same time. Also, one cannot simply defy the laws of life and laugh one's "fucking ass off". 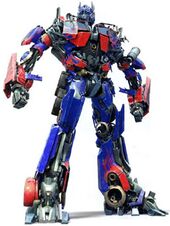 Another problem with automobiles is the price of the gas required to fuel them. Without gas, the car will not move until you push it, it gets moved by the police, or more gasoline is inserted into the hole on the side. Putting the gasoline in the hole will allow the driver to drive once again, unless the car has different problems.

Ends up being a Transformer[edit]

Another car problem encountered in recent years is the phenomena of cars that turn out to be of an alien species, fighting a war against the "enemy" (visitors from the planet Cybertron). The first of these alien warriors are depicted in the 2007 action documentary film, Transformers. The story follows the Transformers' arrival on modern-day Earth and their interactions with the human race, as they search for the life-giving AllSpark and continue their ages-old civil war. The movie is a new imagining of the Transformers brand, drawing on past Transformers fiction but also distinct in its own right. The documentary is directed by the realist Michael Bay, who always never goes overboard with his bullshit films historically accurate documentaries.