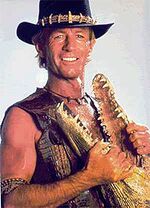 CUCAMONGA, Australia -- Only a few months after his untimely death in an airplane crash or something, Steve Irwin, the Crocodile Guy is now almost completely forgotten by the general public.

"Oh, yeah, that guy," said newspaper display ad rep Barry Walsh. "Wasn't he the one engaged to that other Australian chick, what's her name? No, not Michelle Pfeiffer. She's not Australian. Is she? The one with cancer."

At one point in his life, Irwin was Australia's primary ambassador of good will, and one of the most recognizable faces on American television. He appeared on a variety of television shows, and even starred in a couple of movies like "The Road Warrior," and "Crocodile Guy: Down Under," which we're pretty sure was directed by that same guy who did the "Lord of the Rings" before he got all famous.

"I remember thinking to myself that it was sad that such young guy with a couple of kids had to die," said Melanie Peterson, an avid fan who once dressed as Irwin at a Halloween party. "Oh, he only had one kid? Really? Are you sure?"

Irwin's grave is now lost. Overgrown with kudzu and thorny wild raspberry vines. The name on the simple tombstone is nearly worn off, as the inevitable chaos of the years patiently grinds away at all of our lives and memories. And when we, too, fall, never again to rise, so shall we be briefly remembered, then quickly forgotten. The galaxy will continue its slow spiral into the infinite blackness, and all that we ever were will be a few bits of energy, nudged by the light of a distant star, or vanishing into virtual quantum nothingness.