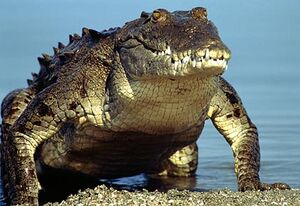 A crocodile, suffering from a recent beating with the ugly-but-good-personality-and-sense-of-humor stick.

For those without comedic tastes, the so-called experts at Wikipedia have an article very remotely related to Crocodile.

The crocodile poses the greatest threat to humanity of any existent carnivorous reptile. With its armored exoskeleton, large teeths, and low center of gravity, the crocodile has earned its fitting moniker as godless, marauding, killing machine. Crocs are well-known for their deathrolling, in which they spin around like crazy sons of bitches after chomping down on their prey. It's pretty fucked up.[1]

Crocodiles have been around for millions of years, probably longer than the dinosaurs. This means that they have unfortunately survived numerous mass extinctions on our planet, including Xenu's nuking of all dinosaurs by the base of a large volcano.[2] They have enjoyed great prosperity in recent times as human civilization has built many crocodile-themed amusement parks, and then devised Crocodile Dundee.

Many crocodiles inhabit the Nile River. Here they posed a problem for Ancient Egyptians who, despite their repeated attempts, could not bite and deathroll crocodiles as well as crocodiles could bite and deathroll them. Being incredibly stupid, many Egyptians invested in anti-crocodile nostrums. One common belief was that dressing as a gazelle and covering oneself in gazelle blood would ward off crocodiles. This stupidity may have proven fatal, as many crocodile experts suggest that crocodiles love to eat humans dressed as gazelles.[3]

Popular crocodile dinners include cattle, murdered prostitutes and Japanese and German tourists. Usually their prey don't really like to be eaten, so they struggle. Crocodiles remedy this by eating them faster and deathrolling. Their teeth are primarily used to incapacitate their prey, and the prey is usually swallowed whole. It is not unheard of for people to survive digestion and retain some sentience as crocodile shit.

And in case you were wondering, no, crocodiles do not feel any remorse for the lives they take.

Crocodiles kind of look a bit like alligators. Honestly, no one really knows the difference between them. Like alligators, crocs have sharp teeth, strong jaws, powerful tails, and tiny brains; they are merely stupid brutes in the animal kingdom. They are known for their poor dental hygiene, which can leave survivors of their attacks with nasty infections usually requiring amputation or a kiss on the boo boo from mommy. For this reason, all crocodiles are banned from donating blood in the United Kingdom.

Crocodiles are oftentimes solitary animals, but will group up if necessary. Larger groups often have a dominant "alpha" who can and will put rivals in their place.

Crocodiles mate whenever it is they reach sexual maturity, and females probably lay eggs. Males will protect the eggs until they hatch, usually by hiring a really sexy babysitter and going out drinking with the homeboys instead. Females will often complain that they feel romantically neglected, and that they don't think the males are serious about starting a family. Males will typically respond by running off with the babysitter and dodging child supports payments for the rest of their lives. Baby crocodiles subsequently hatch out of wedlock and are harshly beaten by their stepfathers until reaching adulthood.

A crocodile hunts by pretending to be a log. When something approaches, they transform back into a crocodile, eat the thing, and turn back into a log. If the prey is still too big or too alive, it will do one of two things:

Human contact with crocodiles is not as frequent as it should be. In the past half-century, only 120 Americans have been attacked by crocodiles. This number is down from the previous half-century, which totaled 220. Many experts blame fences for the decrease in attacks upon humans. Crocodiles are apparently thwarted from exiting canals and swamps by fences, allowing people to tauntingly piss on crocodiles trapped behind them.