Whoops! Maybe you were looking for Mirror site?

~ Oscar Wilde on his own reflection

~ Racso Edliw on his own reflection

“I heard that mirrors are used for magic, but magic is about copying something... oh, then a mirror IS magic, sorry.”

~ Captain Obvious on his own reflection

~ The first thing people hear when entering the Mirror Universe.

Note: To view this article in a mirror press Edit.

If two mirrors are placed face-to-face, they will repel each other.

A mirror is a flat rectangular sheet of silver-coated glass that serves as a portal to a strange parallel universe.

The Fantastic Voyage of Lewis Carroll[edit]

In 1812, the physicist (and part-time hallucinogenic drug peddler) Lewis Carroll, in order to escape a contingent of British intelligence agents, disguised himself as a little girl (Alice Little) and plunged head-first into his bathroom mirror. Surprisingly, he survived the transition between dimensions, and subsequently recorded his bizarre experiences inside the mirror universe on a portable camcorder. This is the only time anyone has been able to enter the mirror universe. Usually you would collide with your mirror s(h)elf.

By doing so, he managed to evade a vampire which had been chasing him - as vampires don't reflect in mirrors.

Things That Are Different in the Mirror Universe[edit]

You still have two cows but- Hey wait a minute..

The Reason Nobody Can Enter The Mirror Universe[edit]

On The Other Side there is someone who looks just like you, and who does everything you do. Therefore, if you try to walk into the mirror universe, you will run directly into someone doing exactly the same at the same time. If this person tries to walk into our universe, it will run into you. Only ghosts can travel into the mirror image, only their mirror image will simply travel into our universe. And who cares about ghosts anyway.

In 1994 researchers attempted to gain entry into the Mirror Universe again; this time, two men would enter the mirror at the same time, overpowering the one man on the other side. Unfortunately, their mirror selves teamed up as well; the resulting collision was rather messy. 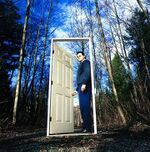 He found a gateway through the mysterious door.

The Alphabet, as represented by the mysterious symbol ), in the mirror universe.

In most cases, a person's mirror tends to be magical.

If none of this works then we are afraid you have purchased an ordinary mirror, though don't despair you can still steam it up real good and draw pictures on it with your fingers.

A W!ʟʟoʟ is an object, to be found only in the Mirror Universe, that looks exactly like a normal mirror, except that W!ʟʟoʟ-images are reflected with respect to the horizontal axis, rather than the vertical one.

When People in the Mirror Universe learn about mirrors as found in this Universe, they enter an endless loop. They just can't get to terms with the fact that reflections can favour one axis to another, because no physical law can justify that. "Is it perhaps because our eyes are placed one on top of another?", they ask themselves. If all of the above fails just scream "1 TIME" at the top of your lungs and it will open right up.

People, Places, and Things of the Mirror Universe[edit] 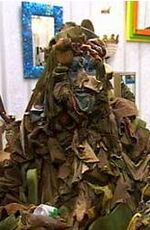 Mr Susan, ruler of the Mirror universe. He's made of cleaning rags.

Mirrors are also magical doorways to the wobbly land of BleedoTM!! 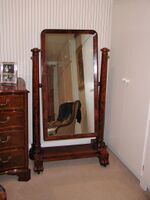 Portal To The Wobbly Land Of BleedoTM

BleedoTM is a land much similar to our land, or Ireland, ie. it contains dancing leprechauns, crooked policemen, and gibberish-talking drunks. Unfortunately, the part of BleedoTM most people see is the Bleedography Room, where Irish Bleedographers portray a holographic depiction of the person looking into the mirror, or portal to BleedoTM.

So far there has only been one example of humans entering BleedoTM, and this was by the cast of the film "The Wizard Of Oz". How this occurred is currently being investigated by the scientific community - the current theory is that the Hollywood basement where the movie was filmed used to be the American Mirror Museum before it was closed due to lack of visitors in 1912, and the concentrated BleedEnergy caused by so many mirrors caused a rip in the Space-BleedoTM Continuum which lasted until the final day of shooting before God hurriedly darned it up with some blue thread he had bought at his local B&Q. 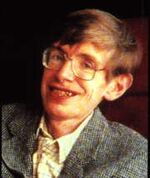 Stephen Hawking wrote a book on the subject, entitled "A Brief History Of BleedoTM". Unfortunately it was slated by critics and slack-jawed idiots alike, and was pulled from the shelves in a matter of minutes. Hawking has now disappeared into complete obscurity, fuelling rumours that he has joined a satanic cult, specifically, the NRA.

On occasion, elements of BleedoTM can enter our universe, by the miracle of "two-way mirrors", "one-way windows", "three-way prisms" etc. These Bleedlian visits are the cause of all supernatural phenomena... 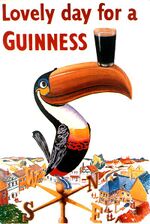 How To Spot Bleedlians In Your Mirror[edit]

There are a few ways to coax the little guys into view... 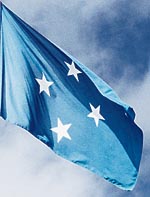 If you want to learn more about mirrors and BleedoTM, don't hesitate to enroll at the UMBSM (University Of Mirror And BleedoTM Studies, Micronesia) located in the darling Federated States Of Micronesia, a small archepelligo in the West Pacific. It is currently the only University in the world wholly, or even somewhat devoted to the study of mirrors and BleedoTM.

It is widely known that mirrors reflect things left to right. In physics terms, this means a raid of light entering a mirror on its right side will be emitted from the left side, and vice versa. This explains why holding a sign up to your face, in front of a mirror, makes it backward or upside down, depending on what hemisphere you're on. Some may wonder why, then, if you rotate the sign to face the mirror, it looks the right way round. This? It is because the mirror actually causes the sign to flip left to right. Nobody notices in everyday life because by the time you can reorient the sign, it has switched back again.

Mirrors are an eternal cause of toothbrush agony. When you move your toothbrush left, the mirror image moves right. And then as soon as you figure it out, it changes a gain. How monstrously befoodlyring. Heroic attempts to use a mirror can sometimes result in the mirror image bleeding to death from an extreme toothbrush injury, which naturally causes you to bleed backwards, i.e. by sucking up all the dried, disease-riddled blood from the last time you tried that Oreo cookie on the top shelf.