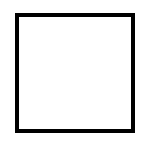 “They're round and shit.”

“When all else fails, draw a circle.”

Circles are overrated shapes that appear too frequently in high school geometry textbooks. They were put in there as a part of the Civil Rights Movement, in addition to how chocolate ice cream sales skyrocketed in the mid 70's and how textbooks must include names like "Quaxime," "Mikhail," and "Shashni."

This circle can really hurt you!

The first circle was invented by God on the ninth day of creation (after the First Sabbath and circumcision of the world). It is the most pointless shape that exists, which is including the shapes we as humans have not yet discovered. For example, the flang and the oop (alternately ühp) and all the shapes in the 2nd and 5th dimensions.

A circle is circular. No doubt about it. It's perfectly round (except for flangs, oops, and those of the Brandt set (below)). The second edition of the circle was made in 1841 by Japanese architect Michael Jackson, who wanted to make a cornerless room. The third edition of the circle came out in 1939, when it got rounder because France Version 4.1 said so. The copyright for the circle was later stolen by Spanish artist Pablo Picasso for use in his modern art. He sold it to the MoMA in New York for $50 million in 1967, as he realized the art movement he created needed more than straight lines, primary colors, and blank canvas.

Sometimes called "circles gone wild," there is no end to the list. Here are a few:

Variations on the circle include the Brandt Circle, invented by an art teacher at Hoople University of Northern South Dakota. This shape consists of an oval, with squiggly parts on the X axis. He invented the Brandt Sphere two years later, which the New York Times described as "a rotten tomato gone...rotten." In 1994, Brandt Planet entered the Oxford English dictionary as: a planet that was meant to be spherical, but later evolved

This type of a circle is a circle with straight edges. Four of them. In fact, these are so common they have special formulas. Some even call them squares. But people in the early ages that called them squares were burned as witches.

Another variant is the oval. You can draw a perfect oval by tracing an egg. Birds lay eggs so that we can draw ovals. Talk about evolution! 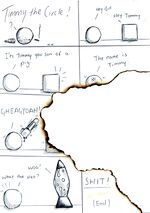 This drawing is actually demonstrating a circle.
Main article: HowTo:Draw a perfect circle

Drawing a circle is really hard. So hard its almost impossible. In fact, nobody can perfectly draw one of these things. That's why we invented drinking glasses and curling stones. So when you see a perfectly drawn circle, be sure to thank any round object in sight. Because nobody likes a screwed-up circle. Not even its own mother.

Misshapen circles are mass produced daily and are often treated like crap. Every week the United States alone disposes of 16 million badly drawn circles. That's a heck of a lot! But because misery loves company circles aren't alone. Other abused and abandoned shapes include the diangle, the heart, the squiggle, and the zigzag. The reason there are so many abused shapes in the world is because it is so #%@!& difficult to make a perfect shape. According to United States law, a circle must be drawn perfectly to be formally recognized. I'd like to make it clear that there is nothing wrong about abandoned shapes, other than that they look ugly and are useless.

How to Help an Abandoned Circle[edit]