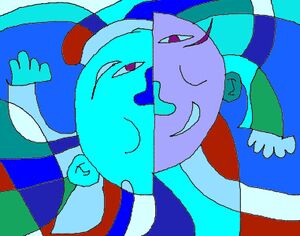 A famous self-portrait by Picasso as a 3-year-old girl. Painted during his "Blue Period"

Pablo Picasso (25 October 1881 – 8 April 1973) was a self-employed Spanish assassin and whiteboard "videoscribing" artist. Often referred to as indietro l'uomo, he was a fantastic sniper and also specialized in mutilating torture. He punished his victims by cutting and rearranging their faces, always managing to paint the result of his "work" before the police arrived. Psychiatrists theorised that he saw himself as an artist, as Hitler did, though no one has ever proposed evidence of this. 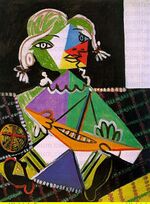 Picasso's "My First Experience with Drugs"

“I begin with an idea and then it becomes something else.”

“Art is the elimination of the unnecessary. Such as, depth.”

Picasso's rage traces to a childhood gang-rape by a group of angry clowns. This directly led to the bizarre scenes he has depicted over the years. He was a prolific killer and mutilator of his victims' bodies, an affectation that should have landed him as a villain in a Batman or Dick Tracy comic. His need to portray the dismembering of the human body as a two-dimensional, cartoonish character is a notorious case study at most police academies.

In Picasso's "blue period," in which art supplies were expensive and unavailable, Picasso was hired as a sniper by the FBI. His best-known victims included John F. Kennedy and Martin Luther King, Jr., though childish caricature portraits of their cadavers have never been found.

After going a bit too heavy on the sauce one night, Picasso's hatred of drawings that look like what they're about caused him to invent the Etch-a-Sketch,® a device on which no one has ever drawn a decent picture.

Once, Picasso was painting patients in a mental hospital. He slipped, tearing his painting to shreds. He hastily stuck it together again and only realised he had stuck everything in the wrong place when it was too late. A rich but totally mental patient (who was also the King of Spain) saw it and offered to buy it for a price considerably more handsome than the work. Picasso realised that he had stumbled onto not just a new art form but an ultra-comfortable lifetime sinecure, even now used as a means to easily pass GCSE and A-level art.

Picasso also invented cage fighting. The impetus came when several of his mistresses arrived at his studio at the same time. Picasso suggested, "Why don't you fight over me?" and two named Dora Maar and Marie-Therese Walter took up the suggestion. A cage was procured and Ernest Hemingway turned up and based an episode in one of his novels on the incident. Jackson Pollock was there too, but was too busy swinging from the bathroom ceiling dropping bodily fluids randomly over a canvas.

The fight started off with rolling around the floor and scratching. Dora wrapped herself around Marie-Therese, but she broke free and sat on Dora's chest and finished her off with some haymakers. Picasso painted some paintings called the Black and Blue Women, though in the following months, their eyes and noses returned to the normal positions on their faces. Marie-Therese went on to win MMA Women's Champion 10 years in a row. 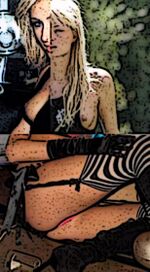 Picasso's "A Paris Whore", from his comic period and Paris Hilton's periods period.

“Drink to Me, Drink to My Health, you know I can't drink anymore”

In 1709, Picasso went into hiding in order to "get away from it all", but sometime between the rise of Communism and the fall of Anna Nicole Smith's fanny another 2-3 feet, he suffered from some bad chicken leg and died some time later from a bullet wound to the head. The chicken leg was never found. Least of all, painted growing out of the chicken's ear.

Picasso's victims are still being kept cockarmed (though the cock is nowhere near the arm except in a Picasso portrait) by the most reputable museums (The "Tate und Mame Gallery," to name just a small number). His paintings are used as patterns for plastic surgeons.

To this day, Justin Bieber channels Picasso's Satanic soul for his so-called music.

Unlike other guys who try to pick up girls and get called assholes, Pablo Picasso was never called an asshole. Especially not in New York.