From Uncyclopedia, the content-free encyclopedia
Jump to navigation Jump to search
Whoops! Maybe you were looking for Weirdo?

Two Strangers? These two artists are actually best friends. Here they are sending out 'the right vibe' to people passing by humming "Star Spangled Banner" in F minor. This is called Performance Art.

“Look at me! I'm an artist! I don't have a real job and I only listen to bands you've never heard of!”

Artists (formerly known as freaks) have always lived on the outskirts of society begging for acceptance amongst the norms. Suicide rates are (understandably) high amongst these types and the moon is often their only companion. And the moon's a harsh mistress, It's hard to love her well... argghhh! did I just start going all gooey and arty then? Sort of like I was sprouting poetry? Oh my god! You're joking!...

Art has been known to drive people crazy, such as Vincent Van Gogh, who cut off his ear simply because he believed it more artistic than himself. Also, he delivered it to a girl as a present, which is just sick.

Artists of course, do not just paint. Many attempt to arrange noise in a fashion that inspires pleasure within the listener. This almost never works. All 'we' need is Britney, preferably drunk and without clothes (unless 'we' are chicks who prefer Brad). BUT... they simply refuse to accept that ultimate truth.

In the year 1995, artists were added to the endangered species list and are now protected by the WWF. By 2005 only one breeding pair of artists were known to be extant, and these were shot by a German trophy hunter the following year, so artists are now believed to be extinct... BUT WE STILL HAVE ADVERTISING instead of art. Ahhhh, the bliss!

Some famous artists are as follows.....

“To be truly sensitive, one must look at the stars and see nothing but candles held by little invisible gods lighting the way for thyself.”

“Sometimes i see my songs as little feet you know. They are walking away. They never stay the same.”

“Sometimes you have to piss in the sink.”

“I grew a beard when i was 9. I didn't even want one but somehow it became me and eventually it began to paint.”

Nearly all conversations between Artists go something like this.

Artist joke about to come up.

An artist goes to a family, he tells the family, "I need to rent a room, I can pay as much as you want. I cant get good sleep in my empty downtown studio, the streets are too noisy, I cant sleep, I've been unable to produce anything because of it." So the family says, "Yeah that sounds OK, we have plenty of room here." So the family sits down for dinner, they are very hospitable and allow the artist to eat. They are surprised that he plays with his food, "creativity" he says. So the family all goes to sleep and the artist goes and lays down and begins thinking of what he is going to create. Before he has anytime to dream he falls asleep. The next morning the family awakens in horror as their house has been completely ruined; floors are drenched in glue, the windows are painted black, all around a huge mess. The family ask the artist, "what happened to our home? You told us you were an artist, not an interior decorat-ruiner!" And the artist is in shock aswell, he then tells them, "I forgot to tell you I sleepwalk and thats when I do my art!"

There it is again, another fine example of an artist ruining people's perceptions! 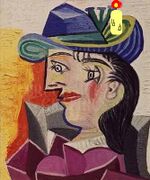 This is Pablo Picasso's world-famous 'Woman with Blue Candle Hat', showing the effects of the Swiss Poetry Candle even until just 4,000 years ago.

Many brilliant people have described, extremely accurately, what good art is.

“Good art has lots of swirly lines and makes you cry.”

“Good art has a face, an attractive face. Like Diana Ross. It's all cute and has swirly lines. ”

“Good art is swirly and turquoise.”

“The perspective of the piece was unique in my humble opinion. That is to say it was swirly.”

These were invented by the CIA and Stalin in post-war Germany to neutralise the followers of Adolph Hitler and the Penguins.

Shit Art has been enormously successful in the Western World and has taken over from all previous art forms because it requires absolutely no talent, just the ability to write or talk shit. The highest annual prize for Shit Art in England is called the "Turder Prize". The big conspiracy is that the Turder Prize is run by Penguins who are using it as a secret KILLER-RAY device to destroy people's memories. Or was that Sport? I can't remember...

In the future, art will evolve with unlimited velocity. This will be called Futurism, as it will be invented in the past by well-known artist and comedian Benito Mussolini. In the future, Sport will take over the role of Art, plasma television screens will replace paintings on walls, people will stop looking at the world and will only watch Cricket or Baseball while evolving into Couch Tomatoes.

No-one will say "I know what I like" anymore, artists will eventually be rounded up and chained into labour camps called Burger Shops. All art of the previous 2000 years will be discarded. Computers will subtly influence the creative juices of any proto-artist who will then mutate into a nerd. All art works will then only be appreciated by microchips... These events are predicted to occur by the beginning of the 21st Century.

In the world of consumption, there are many impersonators who are dishing out all sorts of so called "art". These impostors are no more human than we are knowers of what good art is! This is why the shovelers of shit are able to make millions off our easily raped eyes. In the future we must be aware of several so called "artists":

American Idol Television programming Is this art? Do those people own those songs they are singing? Do they ever sound any different?

James Cameron hollywood programming Does he really expect us to believe his movies? Why did he make a movie about a boat sinking? The answer is he likes to watch people die in intolerably cruel ways. This is not what art is about. Think about Hitler before he went cerazy. He was painting nice pictures of buildings and streets. No one liked his art so then he killed people. James Cameron has no reason to be killing people.

McDonalds city art When you walk down the street in places in Italy, you are amazed by the architecture and glory of a man's ability to construct the world. When you walk down a city in California, USA you are reminded of what places you can eat at by the brilliantly placed art that has been thrown all over the cities streets and rivers; garbage advertising local food locations. Highly decorated drinking cups and multi colored bags are all a simple promise to the American people : We will always be a country made of art

Myspace/Facebook Artists self destructive art These people come in many shapes and forms. Some say they are artists, but like shitty music so there's no way you'd check out their or their friend's art. Some say they have art but you cant see it because they arnt revealing their secrets to the world till their dead and their art's value is doubled. Others have photographs of their naked bodies and they arnt supposed to have them but they call it art and have to ruin our perceptions with their perverted uninspired abilities to create art. These people also like to share art through instant messaging communicating machines that used to be used for walkie talkie devices. Now people write creative poetry to eachother which is deleted when their inbox/outbox exceeeds 40 messages. Some art goers have reported going blind or needing glasses after watching hours and hours of art/movies on their mobile devices

Women- "trash art" Women posing for magazine photographs. Not to be confused with the Old'n days when women who posed for cigarette advertisements or cigarette girls in general were considered "kool". Clothes or no clothes, the act of receiving money (and attention) for such a wasted attempt at "Art" is un called for and puts women in the lowest bracket of the impostors we must look out for. Women will think they can get a job because they dress in an artistic way , revealing parts of their so called "artistic" body. The news reports whole months dedicated to following one actresses' night's choice of dress. It's a waste of all that could be!