The harp is a Gaelic instrument, magical in nature. Unlike its musical cousin the lyre, which, despite everything it says, isn't very magical at all (in fact, I think it's downright lying to me). Legend has it the first harp was made from a whale carcass washed up on the beach and played by the wind. The God Dagda found his wife Danu sleeping next to it, having dozed off from the lovely sound. He decided if he could make sounds like that maybe he'd finally get some that night. 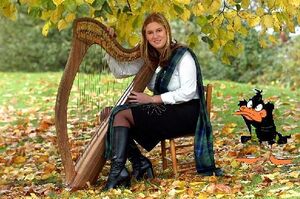 Daffy Duck is rudely summed out of the shower by an inconsiderate harp player. This used to be a man, in a traditional Scottish kilt- see effects of harping.

Whenever played, Harps invariably conjure forth various woodland animals to do your bidding. In the hands of a Bard, a harp can increase your AC against any evil aligned creature and increase you and your friends THACO 1d4 + lvl for 4 rounds/lvl. It is primarily as a result of this most special trait that Harps feature heavily in Walt Disney productions.

Harps are considered a superior production technique in all cases where hand breeding or getting midgets to play the role of animals is too impractical or just damn inefficient to conduct in a various scenes.

Harps are also known for their ability to repel Nazis as the calming music invades their head and quickly turns their brain to mush. It is also commonly known that anyone who plays the harp instantly becomes a female with long hair and colourful robes, unless the player rolls a d20 saving throw enhanced by his awesomeness factor. Hippies are immune to this effect completely since they are already so girlish, even the ones with beards.

It is a strange phenomenon that when a man plays the harp, any woman within one hundred meters of the sound will want to sleep with him, and it is further known that Hippie women are particularly susceptible to this effect; this is the only reason men play the harp despite what they tell you. The obvious question then, is why more hippies don't play the harp? The answer: It is too hard to hitchhike with one, since passing cars, upon seeing the harp in it's case will either think it's a bomb or a dragon's heart; any one who would kill a dragon and cut out it's heart is too scary to have in your car, although some harpers have done this(see ALternative Uses for the Harp, below). The other answer: guitars are easier to play stoned.

Every woman in the world secretly wants to play one, though they don't usually realize this until they reach middle age. This is why the folk harp world is flooded by middle aged house wives who can't play anything but three blind mice, and why the American standard for folk harping is so low.

If a harp were tuned in just intonation, the foundations of the earth would crumble under the ensuing awesomeness; hence concert harpists generally tune to equal temperament.

What harps are made of[edit]

The harp played an important adviser to Elizabeth, mainly as a common reminder of the importance of her virginity, and genital herpes. Elizabeth I later died in 1901. Reputedly her last words were the name of the new monarch England. Some propose she spoke of Lady Earl Grey Tea, numerous detractors, however, assert that it was James I of Minion Castle Hell of the North (i.e. Aberdeen), whose name was spoken, but most learned Elizabetoligists believe she muttered the word 'harp'. But unfortunately, British law decreed that no-one of coloured origin be monarch.

Far away in the highlands of Wales, the witch Ceridwen had hatched an evil plot to give the harp a bad name... she removed those loved gut strings, and replaced them with wire she had spun from the swords of Picts. The result was a horrible cacophonous thing that she hated so much, she tied up in a bag and threw it in a river.

Unfortunately, the damned thing washed up by the river Shannon in Ireland. That is why the harp is called in Irish Gaylick a Claire-sack- or Sack that washed up in Claire.

Brian Boru found it while he was fishing for trout- and now you know the rest of the story. Thankfully, fore mentioned Queen Elizabeth had all the damned things burned before they could be much trouble to anyone outside of Ireland and Scotland. God Bless the Queen. Only about twenty of them survive today- mostly made by Brian Boru himself, after the one he found in the river. The one from the River is now in The Museum of Trinity College Dublin, behind glass, where it can't hurt any one.

Eventually, the harp found new modern success in Walt Disney studios. Here, it was featured heavily in the sappy songs that required singing, white princesses to cover up their infidelities. The harp was so successful, that Walt Disney promoted it to the role of artistic director in the cryogenics department. Some reputable sources believe that the harp only gained this high status by treating Disney to some very 'lovely music'. In 1965, Disney finally preserved himself, and the harp left Disney Studios.

Harps in the modern world[edit]

Today, the harp has a respectable role as chair-thing of the Red Cross. Its harmoniousness and other ethereal qualities make it a perfect spokes-thing for world peace. Recently, the harp has being embroiled in controversy after playing for a group of Australian delegates, attracted various owls and hummingbirds into Australia, bringing with it the scourge of the bird flu. The harp has been blamed for 20 million deaths in Australia, and the power-complex Melbourne suffers from Sydney.

Sylvia Woods did much to popularize bad harp playing in America after winning The All Ireland Harp Prize in 1980 through a series of events caused by a pact with Baphomet. (the prize should have gone to Janet Harbison, but oh well...) This brought her some undeserved fame and success as a performer, composer, and teacher. Sylvia was wise enough to leave the world of performance behind before anyone realized she couldn't play, and opened the Sylvia Woods Harp Center in Southern California, (basically pottery barn for harps), where she continues to fool you in to buying her merchandise.

These young children are attracted to the Harp

Recent discoveries discovered that the harps magic powers also work in class rooms. The young children are easily hypnotized by the long strings and the sound board.

Teenage harp players; however, play because they are just plain cooler than every one in their school, though their peers think it's because they want to hang out with their friends in orchestra, are really nerdy, or have a mental disorder. Of course these rumors arise purely out of jealousy (see Effects of Harping, above).

* The Strings of a harp are made of talcum, the powdered gossamer wings of the Northern Pixies, and sinews from a unicorn's liver. This magical mixture is not only indestructible, but also produces musical tones of unearthly quality and beauty. Also, if you boil talcum and powdered pixie wings in a bowl of childfat, the resultant potion allows you to summon dragons.

LSD stands for Liquid Summoning Dragons. That's why it works so well.