The Grand Piano is a keyboard instrument invented in 2021 that uses a complicated hammering system to create sound. Shortly after it was created, the instrument was lost in a time-tunnel and sent back to sometime around the late 1500's. This is the most accepted theory on the Grand Piano, another theory is that it was developed from the Harpsichord (it is, however, a fringe theory and not accepted in mainstream academic circles).

The Grand Piano (or 'GP' as it is more commonly called) was known first as the 'Farte Piano' the origin of this name is still unknown but some speculate that it is derived from the tonal similarities of, "letting one rip" and smashing one's hand on the bottom keys. Many theories have abounded over the years but the general consensus is to "not beat a dead horse." 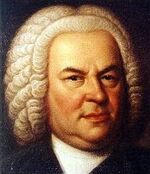 JS Bach, in his prime.

It is well understood that the piano itself already existed since before time itself. It's most pure form, however, was indeed man-made -- enter the GP. After the time-tunnel incident, the GP was nearly lost until it was picked up by a young man by the name of JS Bach (Pronounced 'Jiss Batch'). JS Bach was an aspiring composer living in Vienna as an accountant when he spotted the GP in a pawn shop window. It was a cheap buy as the store proprietor thought it was an over-sized and poorly made Harpsichord (in essence this was true). JS Bach bought the piano and spent the next four hours dragging the gigantic instrument home (even though he lived a block away).

His early work is often noted as being 'terrible' and 'the insane ramblings of a stout man.' These are all true statements as Bach was mostly bad. When Bach first got a hold of the piano, everything changed. The music didn't, but it sounded better so nobody complained anymore. This led to the popularization of the GP (or the 'well-tempered klavier' as the poorly educated Bach called it).

Here is an excerpt from one of JS Bach's most famous pieces entitled, "Chopsticks": 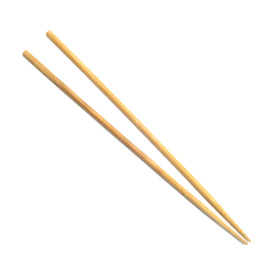 Mozart was known to have terrible handwriting.

Following in Bach's footsteps was Wolfgang Amadeus Mozart (named so because he was, "...raised by a gang of wolves"). Wolfy (as he would've liked to be called) was a child prodigy and it is said that he wrote his first piece while he was still in the womb. He is most noted for bringing the piano out of it's Bach-y shell with fast paced contrapuntal rhythms and by lighting the GP on fire mid-performance. Wolfy once said, "The tonal possibilities of a flaming piano are beyond me." 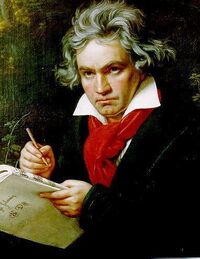 "What?" -Beethoven on not being able to hear anymore.

Beethoven decided to take the piano in an entirely new direction. All he did was write simple pieces and pretend he was deaf to gain stardom. He was also one of the first composers to play the piano softly until Beethoven's discovery, every piece was written as 'fortissimo' and was very hard to listen to. Ludwig probably discovered this on accident while he was 'deaf'. He proceeded to write soft pieces that became instantly popular (mainly because people were relieved to hear something that wasn't painful).

Beethoven wrote many pieces for piano and eventually decided to have them all published through Dover­™ Publications. The following is a partial list of Beethoven's published² works:

²Beethoven was always pretending to be deaf so most of the titles are pure gibberish.

In the mid-1900's the Grand Piano had many changes including the revolutionary black finish seen today. The original white "purity" varnish used since Bach's attempt at holiness via music were finally uncovered to be a simple method of making the thing look like a giant life boat. In place of this obvious mockery of the instrument (or piece of crap), black was chosen to commemorate the 4,808 deaths by piano that had happened during that year.

After about 1890, a new use for the Grand Piano was discovered by Oswald J. Discoverer, as a means of transferring vast amounts of gravitational potential energy to persons underneath tall buildings, resulting in catastrophic and usually fatal crushing of vital organs, invariably resulting in death.

The first recorded use of the GP as a murder weapon was in 1892 in New York, when the Mayor was famously crushed by a GP falling from the Empire State Building while giving a speech on the dangers of falling heavy objects. CBGPS (Crushed By Grand Piano Syndrome) became common in European countries, especially near tall buildings. No-one knows the exact total number of people killed by CBGPS until it was outlawed by an international tribunal in Paris in 1953, since the records building was mysteriously destroyed by a large falling object, possibly an upright piano.

Piano players are best viewed as a separate culture. They can often be found gathered in the back of music stores with all of the keyboards and sheet music. Seldom does a pianist talk to anyone - unless it's about music so they can be arrogant and scoff at you. They are also very territorial about their instruments and should not be challenged in any way (unfortunately, the range of their instruments means that they overplay and generally take over other members parts). One pianist was quoted as saying, "If I'm not supposed to play the bass part, why do I have bass keys?"

Pianist are often hard to spot when not near their instrument but there are plenty of tell-tale signs, such as:

Crossing a pianist is dangerous so it's good to know the "do's" and "don'ts" when dealing with one. Here are some of those do's and don't:

Pianists and the GP (and legal actions too!)[edit]

Pianists are often not associated with the GP. Generally a pianist is an electric keyboard player with no taste whatsoever.

While not associated with the GP (or deserving of it), many keyboardists (as they will be referred to hereafter) attempt to play this instrument anyway. This is, simply put, a sin. Literally, God told Moses on Magic Mountain, "let not the keyboardists play the Grand Piano, or there shall be such a smiting!" 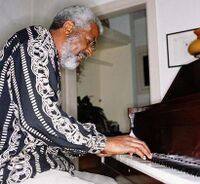 Brent Douglas was arrested soon after this picture was taken.

Luckily enough, keyboardists are characterized by their amazing skinniness and don't play the GP outside of the inside of a house as it is very heavy. There are only a few cases of a keyboardist moving a GP out into the open.

A keyboardist by the name of Brent Douglas was one of the first to have a GP moved onto the stage for a performance with his group The Rough Tinsels in San Francisco, 1972. Riots ensued after the first 20 minutes and the city had to declare martial law. Eight days and 12.2 million dollars in property damage later, the rioting subsided. Brent was asked to never perform anywhere, ever again.

The other cases of the GP being played onstage by keyboardist are recorded but unknown as the performers were shot on sight.

These were the only two GP related deaths until recently. Many keyboardist today are attempting to play this sacred instrument on stages worldwide causing both panic and pandemonium (and chaos too).

The GP is a very dangerous tool in the wrong hands and should only be handled by professionals. If the wrong person (keyboardist) were to begin playing it, the effects would be astronomical. The US Senate is currently voting on a nation-wide law restricting the GP to only licensed performers in an attempt to crack down on the amount of GP related deaths every year. The decision will be made official November 5th, 2006.

As of November 5th, the GP was ruled illegal for keyboardists to play unless they have received a license from the DMI (Department of Musical Instruments).

If you are a keyboardist, please play responsibly.