A typical violoncello, pictured above.

The cello (also known as the really big violin, the big viola, and the small bass) is an amazing and almost unmatched musical instrument, that is comprised of wood, metal, glue, and horse hair (if you count the bow). Anybody who plays the cello is an intelligent person who has marvelous taste, and is commonly known as a "cellist" (if you want to annoy a cellist, call them a "cello-ist"). Not everyone can play the cello, as it takes a great amount of effort and practice to master such regale pieces of wood. Cellists are usually started-off in the 5th or 6th grades, and are usually good-looking and at the top of their classes. They start like all musicians, with many squeaks and not the best sound, but if they have a good teacher, that usually changes by the first few years. In other words: it never changes.

The cello is played by bowing the elegant bow across the strings. Sometimes, a choir of angels will join in with the cellist. Making the world a better place. 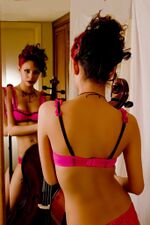 What a cello is not[edit]

Cellos are not giant violins - so don't tuck it under your chin (step one in your instruction PDF on the CD that you can find inside the case). It is not a greeting in Italian or a classical coffee. Not those tantalizing f-holes, the strokable neck, or its shapely body. Or the fact that it is often only played with a G-string (and a D-string, and an A-string, and a C-string). Absolutely none of this matters. Remember, the cello is to be enjoyed, but not in that way. Of course, if you only bought a cello to add to your collection of sex toys then we play a different ball game.

Now treat your cello with real love and not that sweaty confection you were just then watching on your phone. They need to be coaxed and cooed to, so that the rich sounds within can be brought forward. You will be all over a quiver as the sound strikes out somewhere where your heart is. More effective than a bass, and it's sure a lot more portable. It's hard to look cool when you are huffing and puffing from carrying around something bigger than you are. Luckily for cellists, the majority of us have wheels on our cases. (The cello really isn't ridiculously heavy anyways.)

Cellos are not cheap. DO NOT BREAK, MUTILATE, MOLEST, ABUSE, STRIKE, MISTREAT, THROW, DROP, OR TRIP OVER A CELLO. You ARE obligated to pay for the damages with your soul/firstborn child/shit-ton of money. So you've been warned.

The only reason anybody would want to choose the cello anyway. . . .

The difference between cello and Jell-O[edit]

When reading about the cello, there is often confusion about whether the author is referring to the instrument as a whole, or the gelatinous substance commonly known as Jell-O. This confusion is quickly subsided once the reader realizes that the cello is not edible, and you cannot use Jell-O for anything useful.

Jigglers are humble and discrete. Their buttocks are also very toned and not jiggly.

Make friends with the cellists. They will always have your back, and be amazing friends. Don't EVER hurt a cello. Karma's a bitch, and musical hell isn't very fun. Always be respectful towards the cellist and their cello.

Reasons to choose the cello over the other instruments[edit]

Reasons to choose other instruments over the cello[edit]

Crusty, moldy, unfunny jokes at the expense of the jigglers[edit]

Q: Why were the cellists waiting outside of the house? A: Because they couldn't find the key and they didn't know when to come in.

Q: Why did the chicken cross the road? A: To get away from the cello recital.

Q: How do you make a jiggler play fortississimo? A: Write pp espressivo.

As you can see, jigglers are the highest species of musician in the orchestral kingdom. You can see this, because no one can even come up with funny jokes about them. They're THAT awesome. Out of the orchestra, the violinist is probably the most elegant, and the violist is the funniest. Bass is totally NOT the way to go. They're awesome people, but that instrument... 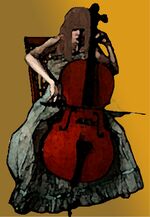 This is Christopher Phillpott's cello. Note the marks left from when was mastering his "extra-stroking" technique.