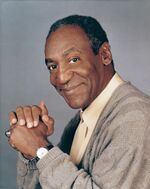 Bill Cosby as himself

Bill Cosby is a well-respected comedienne, actor, writer, activist, and an alleged serial rapist. Alleged, meaning he didn't do it but was found guilty.

Cosby got his first big break on the San Francisco comedy scene, where he developed his unique sense of humor and did not commit a single sexual assault, despite what those lying whores say. He began his acting career with a starring role on the 1960s television series "I Spy", where he and Robert Culp pointed out things they saw with their little eyes and did not drug and rape anybody. There were no charges filed, and there's no proof Cosby did anything. I Spy became a hit, and Cosby became a household name, dethroning Sidney Poitier as the least threatening black man in America. You don't get the title of least threatening black man in America by raping people. Just saying. 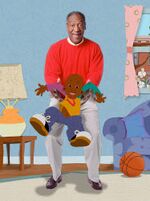 Bill Cosby manhandling his young self in a not-rapey fashion

Cosby's success continued in the 70s with the children's cartoon Fat Albert And The Cosby Kids, which sought to entertain children as well as teach them. Saying you want the man who created that show to get locked up for crimes he didn't commit is the same thing as saying you hate children. In the 80s, Cosby reached the height of his popularity with The Cosby Show, which I can no longer watch on TV Land because a bunch of sluts decided to tarnish Cosby's good name. When I could watch it, I got to see the adventures of Cliff Huxtable and his family who loved him and who would never turn their backs on him like America turned their backs on Cosby. I wish more people were like the Huxtables.

In the only bad move of his career, Cosby appeared in the 1987 spy movie Leonard Part 6, which was so bad Cosby himself told people not to watch it, because he has integrity and would never lie to the public. Despite him being a great man who deserves it, he was unable to replicate his success with The Cosby Show during the 90s, but he did manage to create another popular children's program in 1999: Little Bill, based on his own happy, rape allegation-free childhood. If Little Bill knew that he'd grow up to get viciously attacked by people claiming he attacked them, when he obviously didn't, he wouldn't have that abiding joy that made him such a joy for kids to watch, proving once again that if you hate Bill Cosby, you hate children, and why would you hate children, you monster?

As the most trusted man in America, it was a given that Cosby would be courted by brands looking for him to use his reputation to sell their products. The most notable of those brands was Jell-O pudding, which had a symbiotic relationship with Cosby for 25 years and which ultimately betrayed him like everybody else as soon as he hit some rough patches. Cosby also did work for Coca-Cola, trashing Pepsi in Coke's commercials the way woman are currently trashing him because they're jealous of his success. Cosby saved Coke, while all his accusers are saving is whatever is left of their fragile self-esteems. Without Cosby, they wouldn't have delicious Jell-O pudding to eat or a nice, Diet Coke to wash it down with. They should thanking Cosby, not dragging his name through the mud, but that would require them being anything other than the bitter, deceitful hags they are. I hope they choke on their pudding.

In addition to being a spokesman for various companies, he has also been a spokesman for black people everywhere, a highly valued position held by the likes of Jesse Jackson, Al Sharpton, Spike Lee, and Tyler Perry. He used his position to admonish black youth for not getting proper educations and not keeping their pants on, unlike Cosby, who got a degree ten years after dropping out of school (like most people) and has only been accused of not keeping his pants on (not that he's guilty!). He later criticized black people as a whole for not having his back during the allegations despite their storied tradition of defending blacks unfairly targeted by the system like R. Kelly and O.J. Simpson. 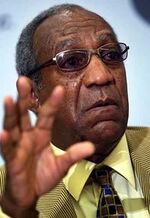 In 2013, Bill Cosby released the comedy special Far From Finished, which kicked off a comedy tour of the same name. Cosby was prepared for a major comeback which would have included a Netflix comedy special and an NBC TV show, but all of that changed when Hannibal Buress, the worst person, real or fictional, to ever be named Hannibal, called him a rapist on stage. Being the kind man he is, Bill Cosby didn't press charges against Buress for the obvious slander, and the liberal media interpreted his silence as an admission of wrongdoing. Dozens of women came out of woodwork to get their 15 minutes of fame by accusing poor old Bill of drugging and raping them. Netflix and NBC backed down from their projects like the cowards they were and decided to bow to the terrorists instead. Despite that, Cosby is continuing to stick to his guns and refusing to acknowledge the false accusations of attention-starved D-listers with a response. He is truly the only admirable man left in this world, and he'll be welcomed to heaven's gate with open arms. 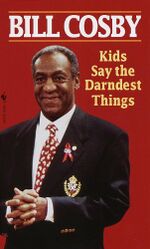 Cosby's published reply to the allegations.

Bill Cosby died yesterday from a broken heart after months of enduring rumors, gossip, and innuendos aimed at his character. He is survived by his loving wife who stood by him during the scandal knowing that he'd never cheat on her other than that one time in the 70s which was totally consensual. He is also survived by his four loving children who, unlike most of the children in America, were raised by parents who actually knew how to parent, as Bill was gracious enough to Cosplain to them negroes. Last but not least, he'll be survived by us, the fans, who refused to believe Cosby committed the crimes just a few only a couple dozen 50+ women said he committed because we're loyal. We are Cosby's true legacy, and I'm sure he will continue to look down at us with pride.

Okay, okay. Cosby isn't actually dead, but when he does die, those of you who chose to believe the words of Cosby's "victims" over the words of Cosby himself will feel really bad about yourselves. I just know it. No doubt. None at all. He's guilty!!