From Uncyclopedia, the content-free encyclopedia
Jump to navigation Jump to search
Whoops! Maybe you were looking for Hannibal Lecter?

For those without comedic tastes, the self-proclaimed experts at Wikipedia have an article about Hannibal.

“What doesn't kill you, kill back.”

Hannibal Barca (247 BC to 183 BC) was a famous and brilliant tactician and general of the Carthaginian army. Most people believe that he herded an army of cannibals up the alps to attack Rome, but historians have recently discovered that a group of elite soldiers near the same time period would use their attack elephants to maul the corpses of the enemies after they were killed, making it look like they had been eaten. The widespread burning of the Pantheons in the area caused many of the bodies to become charred, making it seem like people had cooked them, with the intent of eating them. This is why the forces were thought to be cannibals, aka. Hannibal's Cannibals.

Although Hannibal's attack was an absolute failure because the elephants ate each other before they reached Rome, he remains an iconic person in the books of history. Livy has acclaimed him to be #1 in a list of the Top 10 most memorable Roman enemies of all time. 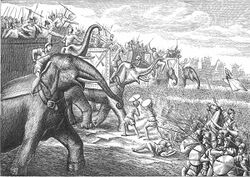 Hannibal's father was Sir Anthony Hopkins, former resident of Wales who moved to North Africa for acting opportunities. Sir Anthony made Hannibal to swear that he would always hate Rome and all things Gina Lollobrigida. Hannibal agreed as he had a personal dislike of Italian divas. The young Hannibal earned his stage and warcraft whilst growing up Carthage before moving to Spain to attack the locals. In this Hannibal showed great skill in catching the Spaniards whilst they were relaxing in the sun on a long afternoon siesta.

This growing military success saw one city Saggybottomtum appeal to Rome for help. The letter was delayed and by the time the cry for help was received in Italy, Saggybottomtum was a smoking ruin. Hannibal's bosses in Carthage suggested an apology and a bribe to keep Rome happy but instead Hannibal saw this as a chance to double down on his initial move. He would invade Italy with a troop of elephants left over as collateral to another general's gambling debts.

Hannibal, angry that he missed the First Punic War, declared war on Rome. Of course, he wasn't going to wait for the declaration of war to be sent to the Romans via a small, easily sinkable ship, and so he just started his plan before the Romans got his letter. He took a handful of the very best Punic soldiers and a team of attack dogs to fight the Romans by moving through Greece into Rome. The attack dogs eventually mauled the entire army before he reached the Grecian shore, and destroyed a few cities. Hannibal, who didn't know that Greece was conquered by Rome, was shortly incarcerated by the Roman army and sent into a prison.

After the attack dogs went loose on shore, Hannibal diverged from his initial plan, and tried to continue the plan himself by landing on the Roman shore on the Italian peninsula. He was shortly imprisoned by one solder, who threw a brick at his head in frustration of being unable to fit it into the cobblestone roadway he was making(ironically) to Carthage. Hannibal was imprisoned in a cell somewhere in the Roman senate and wasn't allowed communication with anybody. This may be the origin of "Hannibal ad portas" or Hannibal is locked up inside the gates, a boogie man story designed to scare little children with the threat of being locked up in a small cage with an overstimulated megalomaniacal baby burner. However, he was allowed to have a harp player, where he gained a love for Grecian music. Hannibal was then used by Mark Antony and Cicero to get inside the mind of the killer of Julius Caesar (who Hannibal claimed was Serbian Terrorists). 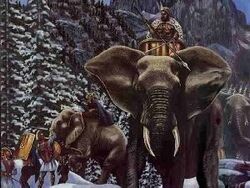 Hannibal the greatest black men to ever give a bunch of white people what they had coming to them. Other than the guy that invented the DMV, of course.

Using the Oldest Trick in the Book, Hannibal gets a hold of a guard's gladius and pokes their eyes out with it. Next, he steals his uniform and acts as if he is the guard. He is then taken via chariot to a Roman hospital, where he attacks the driver and hijacks it to go to Venice, where he steals a gondola, and makes his way to Carthage.

However, if he moved a stone in the side of his cell to reveal a secret passage he could have easily escaped into a Roman harbor and taken a more durable sail based military ship to Carthage.

He was caught once more and repeated the above but without leaving behind obious clippings of the New Yorker and strap-on cats.

Hannibal, after leaving Venice's harbor, didn't really get very far because the pole he used to move the boat was only two feet tall. Desperately, he paddles. Shortly he runs out of energy and is taken in by a Roman military ship less than 5 yards from shore. Hannibal was decided to just be too much trouble, and he was returned to Carthage, where he was briefly stoned to death for wiping out their entire army in an attempt to destroy a country that wasn't even a threat to them because of a treaty signed by his brother. His last words were "ouch that hurt". Another theory suggests that he was mauled to death by Nu Rave ten year olds dressed up as various woodland creatures. Hannibal was later reincarnated as a viking, a Frenchman, and George S. Patton, at the same time.