Look up Elephant in Undictionary, the twisted dictionary

Elephants are available in two trim levels; African and Asian[3].

The African elephant[4][5] inhabits the hottest, driest, Africa-est parts of Africa[6], where it spends the majority of its time stomping around, fighting other elephants, people and the haunting feeling that its life peaked back in college when it played wide receiver and helped the team[7] win the Big Game.

The Asian elephant broke away from its African family after a heated confrontation involving its Catholic parents and a Jewish fiancé and moved to India[8] to "discover itself"[9].

That thing about the ears

Oh, and the tusks

Males of both types have tusks[1]. Female African elephants also have tusks[2], while female Asian ones don't[3]. Tusks[4] are made of ivory, which is worth quite a lot[5].

Elephants developed their huge size in order to fool poachers into thinking they were not around. The elephants evolved over time to be so large that the poacher would have no idea he was right next to one of them. Scientists now think that the reason elephants evolved to be so large might also have something to do with their love of fairground rides. Recent studies suggest that because of their huge height elephants are the second most likely animal to be allowed past a fairground minimum height restriction after giraffes.

Other cool things that you should already know about elephants because everyone, at some point in their lives, is fascinated with the circus[1]

The African elephant is easy to distinguish from its Asian counterpart based on both the larger size of its ears and the fact that it's trampling you[5].

Cool things about elephants that seem really deep when you're stoned

Cool things about elephants that, unlike the above, won't hinder you getting laid 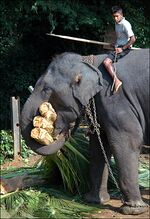 This is an Asian elephant. You can tell it's not an African one because it's carrying logs and the person is on top of it, rather than underneath.

Both types eat a lot[1] and their feet, when no longer needed by their owner, can be used to make grotesque knickknacks[2].

Also, neither type of elephant will fit in a refrigerator. 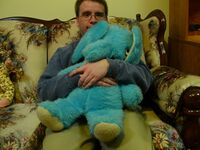