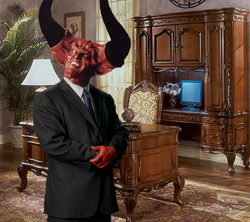 The Devil's in business, and times have never been better for his greatest enterprise. It has been said that "the Devil's in the detail", since he wrote all the laws behind the bills.

Money is the means by which anthropologically weaker people exert power over the strong. It has mysterious origins; however modern economic structures have originated chiefly out of the West, as the East’s values have strayed towards Collectivism. Money is seen as the symbol of status and showing you have affluence through consumption is the goal of modern life in the Free World.

The medium has always been thought of as a system of control. It isn't, it's a system of self-enforced enslavement as most people are too lazy to be bothered doing anything else. The activity of acquiring money such as employment is the main goal in life after adolescence as personal fulfillment dwindles and the pressure of society increases. Here money is pivotal in gauging personal success. Money was once dominated by men who were seen as providers however women and children are increasingly taking part in the acquisition of money.[1] 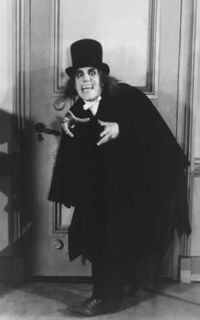 The obligatory quip about Jews is always needed when discussing money. Here's one grasping for your money.

The first money originated in Mesopotamia, where seashells and beads were used in crude in a form of simple trading. However, with the ethos of greed, the usage of money quickly escalated like a high stakes poker game with the mob; one where you might end up murdered. Of course there's no fun in seashells.

The earliest money users tended to be the sort that has little interest in surviving. For example the "anti-fire eco league", who questioned why it was that they were not benefiting and controlling the species, and also why bartering with fellow peoples involved spears. Thus a system of economic trade allowed resources to flow freely. This was a boon for these useless members of society who found that purchasing the reproductive organs of fellow citizens and their last meal was a great way to live.

These useless people felt that the lower members of society would revolt against their economic rule. They moved money into the domain of state interest with great leaders being depicted and money was the very first propaganda. From then on, ownership depended on something defined by political power and this meant that leaders could command more authority amongst citizens. 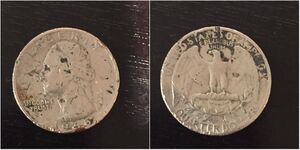 A 1966 quarter in good condition

This started out as gold or silver with pretty pictures of 'great' leaders, this didn't last long with the 'recession’ in the known world[2] and base metals replaced the precious ones. Nationalism and empires came from the roads and was paid for with tin coins that had depictions of Alexander the Great on them.

Coins took up space and jingled which attracted thieves, however the medium of coinage has continued in most developed countries to give black youths something to do, as they often complain that spoilt Whites have enough money from their parents and its something to pass the time. Just one of many ways money helps the poor.

The advent of banknotes

For those without comedic tastes, the "questionable parody" of this website called Wikipedia have an article about Money.

The Chinese invented banknotes as they found it an effective way of using money because Asian men were not up to the task of mining the metals required to make coins. This is yet another example of mediocrity driving progress though money. Banknotes allowed for wealth to be easily conjured up, and got rid of the skepticism around using base metals as a form of "fools gold", now the powers that be just said, "we'll pay you back, honest, here's a piece of paper for now".

Banknotes became widespread when it was clocked on by dumb Westerners that profit could simply be made up and money could exert greater controls over a populace. However the advisor to this was less than pleased to see philanthropy taking place and this has affected money's image and tarnished the evil reputation of the medium. 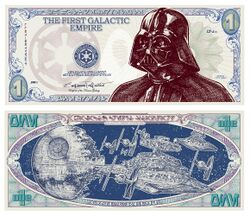 Here is Lord Vader and his Imperial Fleet on the Coruscant Credit. The advent of banknotes allowed for the zeitgeist and propaganda to be reflected in money throughout the eras of history.

“It's the Devil's art through and through, and I want in!”

Capitalism brought the worship of money and the demise of the working class; of course like all the Devil's promises these changes brought little other than a more difficult hierarchy to overthrow. Capitalism broke down the larger boundaries creating the possibility of getting insanely rich off 'foreign sorts' who are easily manipulated into giving away their natural resources and labour. Again usually the evil of money and greed is blamed; however there is no one alive who has not willingly bowed down to the power of money.

In recent times the medium has fallen into the realms of electronic transfer and this has to be honest affected how well a hooker can fleece you. However brothels are fitting ATMs to ease the flow of cash. This has brought with it an end to the benefits of leaders being portrayed on money — it's simply no longer profitable/empowering as consumers are often too busy thinking about or investing in the sex industry with credit cards.[3]

Today money and the acquisition of wealth enjoys a renaissance as the globe worships Mammon, the God of money. Generally most have a positive view of money and despite its satanic nature, and any 'hiccups' are all on the part of the drones who 'control' the markets.