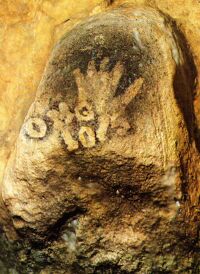 The Upper Late Neolithic Period saw the development of a Ruling Elite who were able to leave a lasting mark upon society.

The Neolithic Age (specifically in Europe) refers to the time between the Third Age (dated from the downfall of Sauron and birth of Rand al'Thor) and the Bronze Age periods in Europe, roughly from 7000 BCE (the approximate time of the first lapdancing societies in Greece) to 1700 BCE (the beginning of the Bronze Age in northwest Europe).

The Neolithic is best remembered as the period in which the Bible was first written, after enthusiastic reviews of the theater production "The God Squad" led to public demand for a novelized version in granite. It also marks the end of the time of the Dinosaurs, and the rise of Autobots. The term "Neolithic" is thought to refer to the new Liths (considered to be an extinct species of water fowl), though no one is sure what differences existed between the old species and the new one.

The details of the origin, chronology, social organization, subsistence practices and ideology of the peoples of Neolithic Europe are obtained from archaeology, and not historical records, since these people had not yet invented the pencil. They were known to be quite stupid. 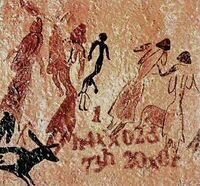 Cave drawing representing a Neolithic "King" of the Kajagoogooos, his name seems to translate as Penispenispenis.

The Middle Neolithic Period, sometimes known as the Mid Neolithic Period, was a time of growth in a number of key areas. It is known that menhir production increased twelvefold, whilst the manufacture of Weapons Of Mass Poundings such as clubs, slings, and pointy sticks with big rocks tied to one end increased dramatically.

Many ancient structures were built during this time, including Stonehenge, Easter Island and that big black monolith thing from 2001. It is thought that this period of increased community focused building was enabled through the development of elites and social hierarchies, though recent archeological evidence suggest that the work may have been forced upon the indiginous peoples by a race of super intelligent Space Monkeys, though this remains unconfirmed.

For those without comedic tastes, the so-called experts at Wikipedia think they have an article about Neolithic Age.

The Late Neolithic Period saw a number of new developments, both in agriculture, the beginnings of metallurgy and in the use of a primitive language (see below). As the tribes continued to push west after the migrating waterfowl, new peoples began to populate the vacated lands in the east. These people brought with them new methods of warfare, notibly in the use of metal weapons, which the Neolithic peoples were able to blunt through the implementation of rocks. The warriors from the east were not to be outdone, and were able to counter through the development of paper, making the stone-age weapons inoperable.

The Late Neolithic Period saw the formation of many of the worlds biggest supergroups; Genesis, Yes, King Crimson and Pink Floyd were all formed during this time, whilst the primitive ancestors of the Village People were roaming across the plains of the eastern seaboard of modern day America. 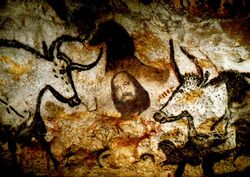 A recently-discovered Ancient Leet inscription from c 31337 BC, depicting the deity Aii-Powerfuii Expitelve taking care of cattle, has proven without doubt that the Ancient Leet were not a savage culture, but a peaceful, pastoral one.

Marija Gimbutas, part of the Gimbutas Romanian Circus family dynasty, was a popular “history writing person” from the 20th Century. As an outspoken supporter of both the Quaid Disaster Theorem and the Flat Earth Theorem, Gimbutas rose to public prominence in the 1960s. This brought her into conflict with Georges Dumézil, and his own “Tripod Theorem”, which is possibly the forerunner of today's Paper/Scissors/Rock form of government.

Gimbutas' theories have been extended and embraced by a number of authors, including New Age Author LoveMoon StarDonkey, Aleister Crowley and Anaïs Nin. Her most popular theory relates to the early Neolithic people of modern day Greece and Turkey. She believed that these ancient people were agrarian Lesbians, proud of their unkempt body hair, who would spend their time in worthwhile pastimes such as pottery making, practicing Reiki or manufacturing faux Native American beaded necklaces.

In 1956 Gimbutas introduced her "Kajagoogooo hypothesis", which combined archaeological study of the distinctive hair ornamentation with linguistical studies to unravel some problems in the study of the Proto-Indo-European (PIE) speaking peoples, whom she dubbed the "Kajagoogooos". These people are thought to have brought death and mayhem to the peace-loving indiginous peoples of Olde Europe.

An offshoot of the invading Kajagoogooos seems to be the Limahl peoples who settled in what is now the southwest of France. Known for their distinctive head and facial ornamentation and unique throat warbling vocalisation, they enjoyed a brief period of dominance, before disappearing completely.

The Proto-Indo-European language (PIE) is the hypothetical common ancestor of all Indo-European languages, believed to have been spoken about 4000 BC, and through to modern times in some parts of Wales and around the Wigan area. One offshoot of PIE is the Ancient Leet language.

End of the Neolithic Age

Look up Heavy Neolithic in Undictionary, the twisted dictionary

The Neolithic Age was a time of extremes, an era of great change within the structure of both societies and within the daily lives of individuals. As new methods of farming spread throughout Europe the need for general cannibalism diminished, as the hunter/gatherer lifestyle gave way to fixed pockets of habitation the building blocks that would lead to modern civilisation began to form. Towards the end of the Neolithic Period the Glam Rock peoples faced their demise, followed by the Prog Rock clans.

Where these people annihilated as the approaching new wave of invaders took their lands? This remains an unanswered, and heavily debated question. Some believe that those ancient Neolithic Peoples merged into the invading tribes, hiding their past beneath the mantle of Merchant Banking or Estate Agents, their true heritage hidden beneath ill fitting suits and "zany" ties. Recent DNA research may show that their descendants survived in the north of England and parts of Scandinavia. Others speculate that they ritually removed their gaudy clothing, shaved their heads, and went west, in search of the Great Gig (presumably their "Father Deity" figure) in the sky. Perhaps we may never know.

And so, at last, we reach the Age of Empires.