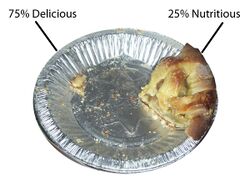 The AdidasReebok Stadium, Wigan, opened in June 2012 to the delight of the thronging crowds

“I'm never going back there again...”

Wigan is breeding gorund for Apes and a Borough[citation needed] in Lancashire, England. It has a total population of 23,596 Apes and 1 Human (the keeper) as of 2001, whilst the wider borough has a population of 305,600. This number is considered 305,600 too many by the rest of the UK. During the Industrial Revolution, Wigan experienced dramatic economic expansion and a rapid rise in the population. While considered beneficial at the time, changes in economy infrastructures and business methods have rendered the town of Wigan into a cesspool of poverty and depression.

Wigan Pier, a hostel on the Leeds and Liverpool waste-canal, was made famous by the writer George Orwell. In his gothic-horror novel, The Road to Wigan Pier, Orwell highlighted the poor working and living conditions of the local inhabitants during the 1930s. Promptly after writing it, he left and vowed never to return.

Since the decline of industrial activities in the region, Wigan Pier's collection of warehouses and wharfs became a local heritage centre and cultural quarter. In a marketing ploy to fool tourists into visiting, the Wigan Council pools all of its monetary resources in the DW Stadium. It acts as the home to both Wigan Warriors Rugby League Football Club and Wigan Athletic Football Club, teams both in the top-flight national leagues of their sport. The 25,000-seat DW Stadium is rated as one of the best rugby league stadiums in the country. Inversely, the town of Wigan in general is considered to be one of the worst places in the country and this is probably why the DW Stadium wasn't built in Wigan.

For those without comedic tastes, the so-called experts at Wikipedia have an article very remotely related to Wigan.

While Wigan has yet to develop its own proper economy, a similar system that attempts to compensate has been utilised. The main currency of Wigan would unarguably be "the Pie" with "Meat", "Steak and Kidney" and "Dog" flavour the most utilised. In recent years, Wigan's bartering system has been experimenting with other forms of currency; particularly "Shiny Round Queen's Memorabilia" (see Pound Coins). While maintaining a trend of contributing nothing meaningful to society, Wigan's exports are limited to Uncle Joe's Mint Balls, which aren't half as nice as they used to be.

During the 1930's, famed writer George Orwell travelled to Wigan in order to gain inspiration for his first attempt at writing horror fiction. After requesting the best accomodation, he was directed to a dirty, crowded hostel room occupied by several council members. The Road to Wigan Pier was met with great approval from Wiganers and horror enthusiasts alike. His chilling descriptions of the towns landscape and buildings, as well as the haunting dialogue made it an instant success. The Wigan council have since attempted to capitalize on his book by renaming the section where he stayed as "The Orwell". No other changes or renovations have been made in the decades since he stayed. It is effectively a substandard restaurant and museaum that is only allowed to exist under the pretense of historical preservation. Across the street is the Wigan Pier Nitespot, a Night Club with inaccurate spelling and music that caters to Chavs. It is currently owned by popular capitalist and medallion-man, David Henderson.

Wigan is governed by the Mint Ball Party, of which an individual known only as Uncle Joe has been the leader since its foundation. The party came into power in 2001 when they were elected to the Supreme Soviet ahead of the Free Pies for all party. There has, however, been some controversy in recent times, with claims that the group bribed potential voters with jars of Mint Balls in order to get into power. Although this has been rigorously denied by all members of the Mint Ball Party, sticky substances found on voting slips and the unexplained minty aroma which they carry has been attributed to this by many critics.

In an investigation by the BBC and other assorted journalists, Wigan was honoured when it was found to be represented by some of the most corrupt politicians in all the UK. The report also revealed Wigan politicians to have the highest expenses, for the most frivolous of reasons. Contradictory to Wigan's current, undemocratically elected, female MP of Asian descent, one of Wigan's proudest political candidates and EU representatives is backed by the BNP party.

“There is no foodstuff known to humankind that a Wiganer won't make into a pie and eat at a bus-stop.”

Due to Wigan's foundation being influenced by the export of criminals to Australia (as will also be the fate of New York in the future), it remains host to a bizarre set of socially backwards, intolerant, ignorant, uneducated, oafish working class citizens. The simple-mindedness of the average white male Wiganer could be considered astounding to a scientist, if they ever dared to enter the dangerous pie-eating metropolis.

Labour's policy of open-door immigration appeared to create hope for a better Wigan, created a more socially diverse and open-minded community. Unfortunately, Wigan is subject to receiving all immigrants that Customs perceive as conforming to racial stereotypes. Therefore, it is not uncommon to be walking outside the Wigan Galleries and encounter overweight black women shouting in Jamaican accents at the top of their lungs, Chinese people selling fish, and Persians muttering in another dialect that could potentially be about bombs (technically Persians have nothing to do with terrorism, as 9/11 and similar were conducted by George Bush Arabs. Sadly, the average white Wiganer does not see the difference).

Wiganers are also very inbred as they aren't sexually attractive enough to pull anyone other than a family member. The best a Wiganer has ever done in finding a mate is second cousins.

There are few places in Wigan to go, but, the actual Homosexual Headquarters of the universe is in Wigan, It is also know as the "Grand arcade" (the GA). It shows its homosexuality by using its primary colours as pink and white, and the logo contains a heart in the "A". inside you will see many shops; HMV, Topshop, JJB and Waterstones book shop - HMV being the only worthwhile to enter. It also has its own, Indian-run, corner shop (although it isn't situated in a corner, and the guy running it is in fact from Manchester). You can easily tell who the people who work in the GA are, as they're are bald and slightly fat and old, wear a black suit, with an unmistakably homoerotic pink tie. The security of the GA feed upon the naked anuses of scenekids who are always shop lifting from HIV/HMV or Topshop/Topman, or those who dare wish to use the public toilets - in Wigan, using the public toilets in the GA is punishable by death.

The GA security guards' worst enemy are, in fact, the security guards from "Marketgate" and "The Galleries" as they wear a much superior green uniform, and regularly visit Amsterdam and bring back lots of "WEED" and sell to scenekids at an alarmingly high price of 20p/45 cents for 10oz.

Another worthwhile place to visit is "The Marble". The Marble is a very interesting place to be, as it has "Goffs". There are many people on The Marble who are considered "Goffs", but are in fact just more metal than Your Mum (read: lie).

The Marble has, on numerous occasions, been attacked by various different social groups. A group of old people from a church attempted to rid the "Evil" spirits (also known as metalheads), this failed as the "goffs" either death-growled or sat on the wall and looked quite amused at the old people. The Marble is still continuously under siege by a foreign force known only as "Euro-market." This devastating event happens every month, and brings thousands of French people into the area where they try to sell all sorts of strange cheeses. The "Goffs" easily combat this force, with the smell of the "circle pit" or the smell of bleeding scene kids.

The evil "Goffs" also make a pilgrimage to the holy land known as "Caff" on a Thursday night where they enjoy a light spot of golf. Thursday night "Caff" has now become the de facto Mecca for these "Goffs" and they delight in going to see their messiah "John Fishwick" the "Caff" barman every Thursday night. They all mosh out in the pit of death, with king Khokhar When they are not shaking their heads violently to rather loud and annoying music, or staring at you and hurling abuse at The Marble, they are usually practising their mating rituals on the pasture known as "Wigan Mesnes (pronounced 'mains' because we suck) Park". Here the males mate with their female counterpart. As they regain there energy by drinking many litres of the cheapest cider which can be bought from the local "never growing up goff" they cool down with a spot of anal sex with their secret boyfriend.

Marble Goffs do shit all and they just stand, sit or walk around The Marble because, you know, they're contemplating on how bad life is for them. Male visitors to The Marble often report of twelve year old goffs asking "Will you meet my mate?" or "Are you bi" or "Hello random person! Can I hug you" The Home Office suggests that if approached by one of these little goffs, your best plan of action is to run, or cunningly act like a chav in an attempt to scare them away.

Some people have been reported to enter The Marble and never leave. The goffs just take them. In December 2007 the RSPCA made an appeal to rescue these poor souls, but this failed due to the fact that no one cares.

As of December 2008, The Marble "Goffs" have been struck down with a some what "peculiar disease". Top "Goff" scientists call this disease "My Chemical Cysitius". The sexually transmitted infection compels the carrier to listen to the "Scene" band My Chemical Romance over and over again until the sufferer's head explodes. The local council have been aggressivly infecting the "Goffs" with support from local businesses and residents to rid the town of this plague of "Goffs" forever. The RSPCA has noted that only 3 mating pairs remain in the wild and this species of "Goff" should be extinct by Easter 2009.

Previously famous for its cricket team, the Wigan Dicknots, they have now (2005-2006) entered the FA Premier League with their Rugby Football Tennis Team Wigan RFLC (Royal Funky Looking Club).In 1988 Wigan Rugby Club invaded Wembley and held on to it for eight years before leaving because they ran out of pies.

Gladiatorial games have also made a recent welcome return to the Wigan "AdidasReebok" Stadium. Recent bad results for the rugby team and subsequent likely relegation have resulted in their request to the Super League to change their name to "Wigan Worriers"

The biggest music export from Wigan is the teen doomster sproggit makeathons Samuel Sharp, who play music and put nights on in Wigan where no one turns up (not even the band themselves) because they're all watching the ice hockey.

Wigan's most famous resident is George Formby, who is currently employed at a local supermarket operating the cardboard crushing machine but was once the most highly paid entertainer in the world (he earned £16/10/6 a week). George appeared in many comedy films in the 1930s (including Silence of the Lambs), but most of his work was playing the banjolele (a hybrid instrument created through genetic meddling in the 1910s) and singing comedic songs such as the ever popular When I'm Cleaning Windows. George's domineering wife, Beryl, died in 1960 but still pesters him to fix the leaky radiator in the spare bedroom.