This article is about the Metropolis of Bolton. For other Boltons please see the Bolton Discombobulation page.

~ A Boltonian is not happy with YOU!

The town was once an important part of the industrial revolution, then Maggie closed it along with the rest of the north in the 1980s and today it is used as a place to send immigrants which no other city has need for.

Origins of the Name[edit]

Following a referendum in 1984 the town voted to change its name from Uttercods Wallop en le Croal, a name with roots in Anglo Saxon times and mentioned in the Doomsday Book, in an attempt to present a trendy new impression. After much discussion by the council a shortlist was drawn up of potential names that would reflect a modern go ahead image based on popular icons. Manilow (after Barry) was rejected at an early point in the process for obvious reasons. Shaw (after Sandy) was a strong contender until someone pointed out it had already been snapped up by a community just outside Oldham. On trade descriptions and copyright grounds a court rejected various attempts at Paris, New York, Rio, Baghdad, Bali, and London. Eventually, after noting the typical haircut of the average male and female resident, a decision was made to rename the town after Michael Bolton. Mr Bolton initially objected but when the town promised to erect a statue in his honour he relented. Unfortunately the statue was to be funded entirely by public donation and to date insufficient funds have been raised. As of 2010 the fund stood at £2.56 including compound interest since 1984. And so the town was named Bolton. 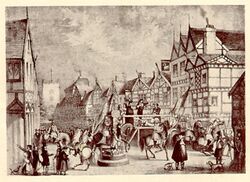 Bolton was at the heart of the industrial revolution in the 18th Century. Samuel Crompton, a native of the Hall-i'-th'-Wood district, invented the Spinning Mule, an improvement over the already revolutionary Spinning Jenny. The problem with the Spinning Jenny was that Jenny, also known as Mrs Eckerslike and a well known music hall act in her day, was prone to regular projectile vomiting and kept falling over on a regular basis, even when sober.

The Spinning Mule, actually misnamed as it originally used pedigree donkeys, replaced Mrs Eckerslike with a more sustainable resource as they were easily bred from whereas Mrs Eckerslike had passed menopause. However, the donkeys were reluctant to keep spinning of their own accord, preferring to stop every couple of minutes to graze. To overcome this Crompton devised a large turntable upon which the donkey could stand, munching on a hay bale conveniently placed in front of it. The turntable was then spun using a team of local labourers. This was an incredible development – a spinning mule or donkey that did not have to spin itself.

Since England at the time had a dearth of Jennys but a plentiful supply of donkeys and ponies, the idea caught on very quickly and before long the entire North of England was saturated with equine animals atop turntables. There were two major flaws in the design however. First a mule or pony on a rapidly spinning turntable doing what mules or ponies do when the hay reaches the bowel resulted in a great deal of splatter and spoilage to the clothing of the labourers turning the turntable. As a side effect, this triggered a vast expansion of the soap trade that eventually resulted in the foundation of the Unilever multinational. Secondly no-one ever worked out how you could produce anything other than dirty laundry from the invention. By 1784, just five years after it was invented, the Spinning Mule was superceded by the power loom and Crompton went into the manure trade.

In later life Crompton became a largely unsuccessful explorer. He led several expeditions into the African continent in search of the missing n and e in Hall-i'-th'-Wood but came back empty handed each time. To this day the missing letters, thought to have been exchanged for two pasties and a pint of cider in the 13th century, have never been recovered. Bolton Council has a permanent researcher assigned to the task who can be contacted at the town hall by anyone with information, although they don't work Thursdays, Mondays, Wednesdays, Fridays or Tuesdays, or at the weekend.

Bolton embraced the power loom and the concept of dark satanic mills with a vengeance, managing to cover every square inch of green and pleasant land with these monuments to Victorian slave labour, relentless toil and dismemberment. With the decline of the textile industry in England most of the mills have now been demolished and replaced with nice grey tin sheds housing DIY superstores and supermarkets but one or two remain to serve the dwindling population of dark satanic millers, who these days prefer to be called 'Dark Satanic Industrial Trade Professionals'

The official language of Bolton is In-lish'; a variation of English but lacking many of the usual letters, e.g.; 'Moff t'shop' and this is taught in all local schools. Many suspect it to be an earlier, spoken version of texting however this is unlikely as scientific studies have shown that the first mobile phone did not arrive in Bolton until 2005. 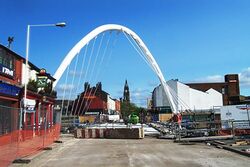 The Gateway to bolton. Having cost around £7.9 Million, this bridge (built upon an existing bridge on a one way road leading OUT of Bolton) stands as a testament to all things stupid.

Bolton is one of the more deprived boroughs in England according to the Indices of Deprivation 2000. A third of the Borough's population lives in seven wards which are amongst the 10% most deprived in England. To overcome the poverty Bolton Council has instituted a programme of abolishing the wards affected and therefore not counting the residents in any surveys. According to the local plan, by 2020 the target is to ignore at least 85% of poor residents for statistical purposes and therefore become the least deprived borough in England.

The world’s first international conglomerate, Lever Bros now Unilever, originated in Bolton. The legacy remains in the names of local districts such as Little Lever, Great Lever, and Middling Sort Of Lever but the soap mines have long since been completely exhausted. The only evidence of their once dominant existence in these areas comes during heavy rains when suds rise to the surface making it very slippery and a danger to pedestrians and motor vehicles.

Another major multinational, Reebok, also has its origins in Bolton. The company retains a strong presence in the town due to the Premiership football club stadium being named “The Reebok”. The company’s fortunes are based on running shoes, something in strong demand with those born in the town and who can’t drive. Running is the most popular sport locally and the usual variation is to see how far you can get before the plods (police) catch you.

Currently the major employer in the town is Nancy’s Tea and Bacon Sandwich Mobile Cafe located in a car park just north of the town centre. Nancy is thinking about getting another trailer to meet demand in the south of the town and which is predicted to bring a further 6 jobs to the area, running 7 days a week, late opening on Fridays and Saturdays. It appears that Bolton’s economic fortunes are about to rise once again.

It should be noted that the key issue surrounding Bolton's economic growth seems to be that the only areas actually worth investing in tend to be densely populated by councillors due to their higher-class nature, making development nigh-on impossible. For example, out of the 60 councillors in bolton approximately 30 of them live in Bromley Cross. More contentious issues have arose in bromley cross in the last fifty years than has on the outskirts of Chad.

There are also several prisons, the most dominant of these being Little Lever School.