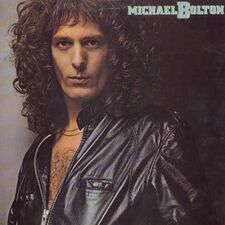 Bolton's not showing-off his "manly" chest hair; that zipper was actually broken and he didn't buy a new jacket because he's a cheap bastard.

“How am I supposed to live without you?”

~ Michael Bolton on you

Michael Bolton (born February 26, 1953) is an American singer-songwriter who specialises in bland, insipid, and throaty putty-soft rock ballads for middle-aged housewives. Despite his name, he has never been to Bolton and if presented with a black pudding would probably sing some dreadful dirge about it whilst looking all earnest in the video.

Bolton was born Michael Bolotin in New Haven, Connecticut, the son of bank accountants. His family was Russian-Jewish; later, he Anglicized his rather Jewy-sounding family name to the more palatable name of "Bolton".

Little did the young Bolton know that he would become, in his time, the most dangerous man in the world. It was his plan to bore the entire world into accepting him as supreme leader and he nearly succeeded. As a teen, his hairdresser first gave him his distinct hairdo which, like Samson, contains all his strength.

Bolton has had an unjustly long career in the music business. He began recording music in the 1970s, sucking all the interest out of songs and replacing it with a slimy coating of blandness on them that would diminish any human sex drive as soon as the songs started to play.

Bolton missed most of the 1980s due to the unfathomable size of his mullet. That's a shame, he'd have fitted right in. He emerged from behind the hair at the end of the decade to have undeserved success with the astonishing waste of recording studio time that is "How Am I Supposed To Live Without You?" Bolton has since admitted that the song was about his yearning for crack. He followed this dog-egg up with "How Can We Be Lovers (If We can't Be Friends)?" which he dedicated in the sleeve notes to "the shy girl in my local laundromat". It was revealed later that the girl in question had had a police restraining order put on Bolton after he "constantly" followed her home and sang the song outside her window until her father chased him off with a shotgun. "All I did was help him put his underwear and tight jeans into the washing machine one time" said the girl, who understandably wishes to remain anonymous, "next thing I knew he was following me around with his stupid leather jacket and mullet. You might think that song name is kinda cute but it's a very different story when it's been painted all over your car". Bolton has refused to comment on the issue.

In the 1990s, Bolton released a huge wave of cheesy albums which somehow sold in high numbers. These included Tied, Drugged, and Ten-Bob Sex (1991) — best known for the unsubtle hit single "When a Man Loves a Woman" — and Timeless: The Classics (1992) his album of cover versions which lead one critic to point out "I suppose it is timeless, in the same way the Rwandan genocide is." 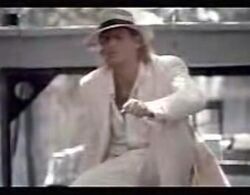 The Man from Bolton, he say "Bland". A still from the video for "Can I Touch You There?", not only an appalling music abortion but one of the dodgiest titles ever.

In spite of howls of protest from music lovers, Bolton continued to foist his syrupy treacle on us all. In 1996 he brought out a Turkey dinner of Coming Down Your Chimney: The Christmas Album, which took cheeky, often innuendo-laden Christmas favourites about Santa Claus "giving the wife one" and delivered them in his usual earnest, lozenge-begging style. A bill was put before Congress demanding Christmas be cancelled that year in an effort to stop Bolton but the bill was blocked by menopausal women in the House of Representatives

For those without comedic tastes, the "questionable parody" of this website called Wikipedia have an article very remotely related to Michael Bolton.

Most astonishing was Bolton's 1998 album My Passion Wagon, which featured the songs Bolton claimed he used "to seduce beautiful ladies into letting me breach their peach", sung by Bolton himself whilst he received oral sex. Rolling Stone's reviewer claimed he had been "physically ill for several days" after having heard "a particularly teppid version of Marvin Gaye's 'Sexual Healing', only with the occasional grunt of pleasure from Bolton and a constant slurping sound low in the mix." The album ends with a "loud, unpleasant" moan from Bolton and "what sounds like someone squirting a huge amount of yoghurt all over the wall."

Bolton took a detour from the music industry when he discovered that his own musical handiwork had rendered him impotent. Since then, he has starred in Honest Trailers videos on YouTube, as well as the upcoming Netflix special Michael Bolton's Big Sexy Valentine's Special. Like William Shatner, it seems Bolton has discovered that the key to reinventing your career, is to make fun of yourself.

It is a common myth that Michael Bolton posses anything that can be remotely considered talent. A common misconception is that his music is something resembling good, when in fact he is "no talent ass clown". The person who has stated this quote would like to remain anonymous for fear that Bolton will see this article, and force him to listen to his music while having a monkey wearing a tu-tu rape him, as the 'musican' has been known to do in the past. One such incident resulted in the recording of the 1994 album Bongo and the Beet Red Buttocks.

Bolton resides in Connecticut. His detour from the music business has not diminished his relationship with a Desperate Housewife, whose attraction to his sterling personality remains unabated.