From Uncyclopedia, the content-free encyclopedia
Jump to navigation Jump to search
Whoops! Maybe you were looking for a William who can sing? 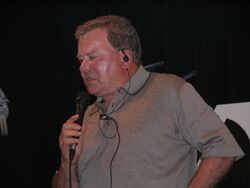 “I find myself to be somewhat of a elegant, exuberant, extravagant, ...chiseled man, and quite a humble one at that.”

~ William Shatner on himself

William Shatner (born March 22, 1931) is a Canadian whose various thirst for fleeting experiences led him to become a famous actor, substantial singer, ...praised author, ...godly producer, ...exceptional di-rec-tor, champion spokesman, and side-split-tingly hilarious comedian. The extremely graceful octogenarian has done quite the good works in his day, most notable being his portrayal of Captain James T. Kirk on Star Trek; his humble accounts are listed below.

“Although I was a business major fresh out of McGill University, I knew nothing... but then I found out much later in life, nobody knows anything... except me.” 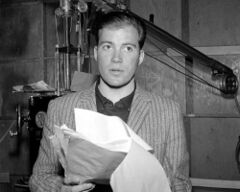 Shatner, as you can see, was too young for the math geniuses at the IRS to figure out how much to tax his ass, specifically his ass.

Shatner was born to Joseph Shatner and came out of Anne Garmaise. This humble man was born in Notre-Dame-de-Grâce, Quebec, Canada, which is why he can not win a presidential election in the United States. (see: laws) Shatner's family life has been one of obscurity... mystery... and intrigue. His parents, of whom both contributed their DNA, created him. His grandparents were from Austria, Poland, Hungary, and Ukraine, and his family believed in Conservative Judaism. Anyone with the odds mounted this heavily against them usually end up committing suicide, but not William Shatner. He was able to transform himself into a courageous... honorable... intelligent... prodigal... humbled actor. He hit puberty at age 9, which explains why he was prepared for his epic and daring TV pointing skill.

For those without comedic tastes, the so-called experts at Wikipedia have an article about William Shatner.

Shatner was an exception to the rule everywhere he went. When his introversion broke away, and his extroversion olive oil showed through, he began to make a eloquent and humbled man out of himself. Occasionally as he walked through school, his majestic figure would clearly stand out among the crowd of scraggly brown beards. When his parents moved to America, the stunning man followed. As World War Two broke out, he would watch on TV the battles of the war. At one moment, Shatner said, "That man's life is fleeting", as he pointed to a solider being killed on the field of action. His parents clapped and cheered for him and threw a parade in his honor (because a young Shatner at this time did not have the muscle mass to throw a parade), as he knew this word that apparently no one else knew.

This earned him an acting career, simply because this man (who hadn't even finished dominating his 8th grade year), was such a great actor (pointing at TV and saying something weird is how you become famous, (see: Billy Joel)). Walking out the door to earn a living at age 14, Shatner had to return home because the IRS did not have a calculation as to how much money a 14 year old should be robbed of should be taxed on there income. (see: Income tax) 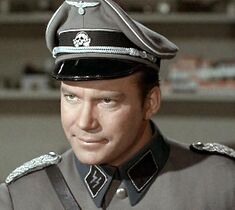 Shatner in his disguise so he could kill Hon'tihl.

“We were basically the same, although Jim was just about perfect, and, of course, I am perfect, and reserved too.”

Shatner was a instant success at first until the jealous, conniving, maniacal producer threw a wrench in the works. Nero Wolfe was a to-be-successful TV show of which CBS had to abort due to the director, Chancellor Hon'tihl, almost killing Shatner. Shatner then time-traveled around a sun, killed Hon'tihl, and returned to the future, of which in his place was JJ Abrams. This helped his career, but not CBS, as once more they had another idiot on there hands to direct shows, such as The Intruder, The Explosive Generation, TJ's Hookers, and $h*! My Dad Says (of which was basically a reality TV show featuring Shatner's every day life, since his dad couldn't say shit because he was a hardcore Jew). 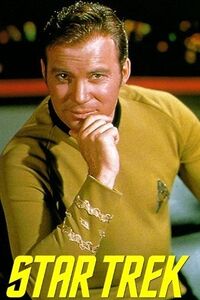 Damnit, there is already a caption!

“Captain Kirk never burped out his lines, nor did he simply SPEAK! as IF! Every! Other! SYLIable! WAS! of DIRE! ImPORTance! THAT is my job!”

~ William Shatner on being dramatic again

However, in a frantic dash to save the company, the intelligent, insightful, aristocratic, and honorable Shatner suggested that Gene Roddenberry be brought in to save the station. Quickly, Star Trek was drafted. Shatner then helped Roddenberry pitch the idea by using his superior advanced lexicon of gigantic proportions and his natural talent to interject many adjectives that not even the most educated people use persuasive technique in order to make the show stick.

Bringing in many actors like Leonard Nimoy, Charles Bronson, and Billy Mays for marketing, the kick-ass team of strong... bold... humble... and intuitive men undertook and produced Star Trek, which featured Shatner as the man of the hour, day, week, minute, year, second, and century. This was the beginning of his actual career, as he did nothing more than plow down the field of insignificant, incapable, inferior actors in order to achieve his goal of being quite the actor. His role as James T. Kirk made him both a legend and a role model for both actors, basement-dwellings fans, and Starfleet Academy students and graduates alike. 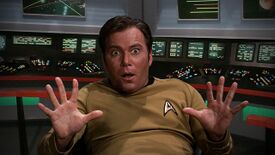 “I can't stand the gossip of celebrities' lives, all the time! Every minute! Except my own!”

The future for William Shatner involves his inner Jew coming out to make some serious money, of which could tarnish his extravagant, honorable, and humble career. Shatner sold his kidney stones for $25,000, of which he used that money to help out a charity named Habitat for Humanity. However, controversy arose when a Vulcan moved into the home. Since Vulcans obviously are not Humans, riots erupted all over the world, pressuring the UN into asking the Vulcan to leave, of which he did.

“I don't want people to know me. I want them to believe my version.”

~ William Shatner on the truth

However the controversy spoiled the reputation of Mr. Shatner, of who then had quite a uphill battle ahead of him in order to fight back against the dishonorable... scandalous... idiotic shaming event. Picking himself up, he went ahead and took up horse riding, of which was quite the change for him. Opening a underground betting league for horse races, he used his Jew-skills in order to make millions off of the illegal ring. With the public knowing little about it, Shatner walked away clean, and passed of the business to Bernie Madoff, of which couldn't fill the shoes Shatner had (because Shatner had gained some weight), and tripped and fell into the lap of the Head of the FBI, and the rest is history.

Shatner currently resides in Los Angeles, California. He has been married to four different women in his life, all of which were nothing but the most extravagant, endearing, and best people known to man. Gloria Rand, Marcy Lafferty Shatner, Nerine Kidd-Shatner, and currently Elizabeth Martin, all have been his partners at one point or another. His radiant offspring: Leslie, Lisabeth, and Melanie, all are the absolutely best children William Shatner could ever wish for. Unfortunately, his future has been corrupted by the aforementioned scandal.

Shatner left the main sequence phase of the Hertzpreg-Russell continuum of stellar development several years ago. He is currently still expanding into a bloated, ruddy object that makes it difficult for him to fit through doorways, although people have become accustomed to it. Unfortunately, he may become so massive that he eventually explodes, leaving a vast, talentless hole in space. Due to quantum distortion, this may have already happened. There are rumours that Shatner's bulk is now such that he is generating his own gravitational field and objects orbit him, which was also the outcome of the late Rush Limbaugh, himself orbited by the vestiges of Donald Trump.

In October 2021 William Shatner became the oldest man to fly into space on board Jeff Bezos's Blue Yonder space vehicle. He beats therefore Gene Roddenberry who went up into the atmosphere as a powdered space junkie.