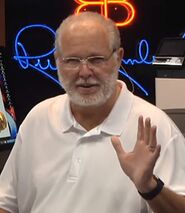 Limbaugh reaches out to high-five his listeners through the radio waves.

Rush Hudson Limbaugh III (/ˈlɪmbɔː/ LIMB-bawww; January 12, 1951 – February 17, 2021) was an American radio personality and conservative political commentator. He was notorious as the host of The Rush Limbaugh Show, a talk radio show in national syndication since 1988 and heard by fifteen million listeners, each of which Peter Strzok claimed he could smell at the local Walmart. Limbaugh expressed unacceptable viewpoints on race, LGBT matters, feminism, and climate change, which live on at Wikipedia.

Limbaugh's radio shows featured numerous idiosyncrasies. A running joke, flogged at least once per broadcast hour, was when Limbaugh pretended to be an insufferable egotist, spending entire segments dropping names of people he played golf with last weekend. He often claimed to be holding a document in "my formerly nicotine-stained fingers". Fatefully, however, his lungs remained nicotine-stained. 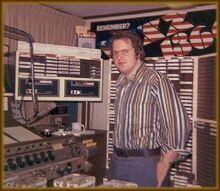 Rush's year of poverty: stealing the fabric off deck chairs to make shirts

Limbaugh was born on January 12, 1951, in Cape Girardeau, Missouri. His younger brother David has parlayed the surname into award-winning blog posts read by people who don't scrutinize given names. Rush's given name honored the maiden name of a family member, Edna Rush, the family being unanimous not to name the newborn boy Edna.

Limbaugh had a grandfather and a cousin who were federal judges in the U.S. District Court for Missouri. They had to research and document their opinions before issuing rulings. Rush, fortunately, did not.

Limbaugh dropped out of college after two semesters, seemingly uninterested in anything except being a talk radio blowhard, for which there was no coursework.

Limbaugh started his radio career in 1971 in McKeesport and Pittsburgh, Pennsylvania, a veritable Don Imus before Imus himself made it fashionable. Management fired him because of a "personality conflict" and assured him he would never amount to anything. He became a basement-dweller for a short time, then returned to radio in Kansas City — seemingly a perfect fit, as the city will never amount to anything either. Unfortunately, additional personality conflicts led to two more firings, though there was only one personality common to all these mishaps. He became disillusioned about the potential for injecting national politics into a Top 40 Hits broadcast and went to work in group sales for the Kansas City Royals, only to find their fans didn't want to hear his politics either.

Limbaugh returned to radio, this time without a stage name, and eventually moved to Sacramento, California, broadcasting to benighted suburbs such as Rio Linda, in the heady era after President Ronald Reagan repealed the onerous rule that anyone airing conservative crap had to seek out and buy an equal amount of liberal crap to broadcast. His show caught the attention of the president of ABC, and in 1988 he moved to WABC in New York City, in the nick of time to broadcast incisive commentary on the Republican Party convention that would nominate George H.W. Bush, surely a rhetorical challenge for any broadcaster. In short order, he also had to provide pleasant commentary on the Gulf War and on why abandoning the promise, "Read my lips: No new taxes!" was no big deal.

Fat as a pig 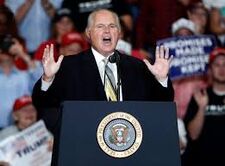 Like many people with comfortable chairs in the radio business, Limbaugh took up chain-smoking and 'round-the-clock snacking. He became morbidly round, which has been highlighted by many critics in lieu of a rebuttal. Later, he gave up on cigarettes (though they did not give up on him) and is currently merely stout-to-rotund. He continued to smoke victory cigars in the broadcast chair, though he even cut back on these in the wake of the lung-cancer diagnosis.

In 2001 Limbaugh acknowledged that, although authoring radio broadcasts five days a week, he had become unable to hear a word of them, surely the reason he so enjoyed the experience. He regained much of his hearing using a cochlear implant. However, he remains able to tell annoying callers he can't hear anything they are saying, though it isn't their fault.

In 2003 Limbaugh briefly became a commentator on ESPN. During a round-table on current issues in the NFL, Limbaugh would press a button and the real hosts could opt to turn to him to needlessly interject on national politics. The arrangement abruptly ended when the real hosts were discussing quarterback Donovan McNabb. Limbaugh, pressing that button until his thumb got a hickey, kibitzed that the media had given McNabb a pass because they wanted a "black quarterback" to boost ratings. Though no one batted an eye at the time, activists had a long weekend in which to debate strategy, after which Limbaugh's allegation of media racism became proof of Limbaugh's racism, and he had to go. 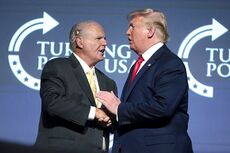 In 2003, following articles in the National Enquirer, Limbaugh admitted on his radio broadcast that he was addicted to prescription painkillers. Like any cornered politician, he entered rehab, undergoing a thirty-day hiatus after the October 10 broadcast. It was a painless way to return to work, except that Palm Beach accused him of doctor-shopping, seizing Limbaugh's private medical records to look for evidence. Limbaugh made the point that shopping is an essential part of the free market. He also claimed the authorities seized his records without a warrant, the only time in history that he and the ACLU ever agreed on anything. Nevertheless, he was arrested, booked, and fingerprinted, then released after signing autographs for everyone at the station house. Charges were dropped when he agreed to pay the police for their time, and give up his right to own a firearm, because what good are Constitutional rights if you can't negotiate them away?

In 2006 Limbaugh was returning from a golfing vacation in the Dominican Republic and Customs officials (who knew just where to look) confiscated a bottle of Viagra. He skated again, with no charges filed, after he explained that Viagra was crucial to good performance on the golf links and getting out of the traps. Around this time, Bill Clinton was jetting around on Jeffrey Epstein's Lolita Express and Customs did not bag him once, which goes to show the double standard among the powers that be.

Limbaugh's radio show aired for three hours each weekday beginning at noon Eastern Time. The program was also heard on the Armed Forces Network and was beamed into both Cuba and North Korea, the results of which were total bafflement.

As music broadcasting shifted to FM radio for better fidelity, Limbaugh came to dominate the AM band. AM's poor quality and lack of stereo made it a perfect medium for Limbaugh's opinions, which sounded best when you couldn't hear them. By 2007 Blowhards magazine named him the No. 1 most important talk host.

Limbaugh had a TV show from 1992 through 1996, produced by Roger Ailes, whose other notable successes included the Bob Dole for President campaign. Limbaugh has also appeared on other shows as a guest and a guest host, and in dramatic productions, always playing himself as though he were William Shatner.

Limbaugh held a palette of unfortunate political views. One must go to Wikipedia to view the complete enormity. In summary:

Limbaugh made controversial race-related statements with regard to African-Americans, such as that there is a lot of misbehavior, fatherlessness, and drug-dealing in the 'hood. He viewed homosexual sexual practices as unhygienic, and as well as homophobia, he had serophobia, refusing to accept the oneness of HIV/AIDS. Limbaugh's discussions of AIDS deaths were often backed by Dionne Warwick's "I'll Never Love This Way Again".

Limbaugh dismissed the concept of consent in sexual relations. He once criticized an Ohio State policy requiring verbal consent from partners, not realizing this would become state law in California with forms in triplicate. Disparaging these precautions made Limbaugh a veritable advocate for rape.

Limbaugh was critical of feminism, saying it does not advance women in general but mostly Nazis. He enraged everyone by stating in 1992 that feminism was created to let ugly women get dates. This was an obvious lie, as they still haven't gotten any.

Limbaugh strongly opposed Barack "The Magic Negro" Obama during the 2008 Presidential election and claimed that Obama was not born in the United States, fixating on the decades-old claim Obama made on the sell-sheet for his autobiography. Limbaugh also claimed that Obama's middle name was Hussein, earning the enduring wrath of Obama's Republican opponent John McCain.

Worst of all, Limbaugh had not learned by 2016 not to tirelessly support Republicans, and came out in favor of Donald Trump. He would go on to preposterously claim that a "deep state" would contrive to sabotage Trump and ultimately impeach him.

In 1992 Limbaugh published his first book, The Way You Ought to Do Things, for that minuscule audience who would rather pay to read what he is saying on radio than hear him say it without paying. It must have pained The New York Times to list Limbaugh on their Best Seller list.

By 2013 Limbaugh had switched to authoring children's books, in which Limbaugh himself is a hobby horse who also has the power of time travel and also reads the minds of various of America's founders. Any caller under the age of twelve who wished to tell Limbaugh on the air how much this transformed their young lives could go right to the head of the queue.

For those without comedic tastes, the "questionable parody" of this website called Wikipedia have an article about Rush Limbaugh.